David Fifita is firmly in Gold Coast's sights, with Mal Meninga declaring the Queensland State of Origin star the marquee player the Titans can build their team around.

Meninga faces one of the toughest tasks in the NRL, trying to help rebuild the Titans as head of performance after three years in the bottom three. 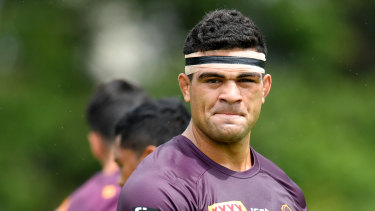 Fifita is off contract at Brisbane at the end of this year after a breakthrough 2019 where he made his Queensland debut, and has been linked to the Titans.

"You can invest in a player like Dave for a long period of time.

"He's a bit like (Jason) Taumalolo who you can bank a team around and he can bring a lot of talent to the club.

"If he is available he is someone we would love to talk to. We're a club on the up so if Dave becomes available we would certainly be having those conversations."

Meninga virtually used Tuesday's media call at Fox League's season launch as a sales pitch to Fifita, who he has previously coached for Australia in the nines.

He pointed out that the Titans under new coach Justin Holbrook are virtually the only other option for the powerful second rower if he was to leave Brisbane.

"I don't know (if he will leave). He would be really happy with the Broncos. They have nurtured him since he was a young boy," Meninga said.

"He is very family orientated … his mum and dad play a big role in his decision making.

"So with those things in mind there is only other option for him, that's the Titans."

Meninga also noted the star's background as a Titans junior, and that other ex-coast prodigies had returned to the club from the Broncos.

"Dave himself grew up there with Keebra Park … it's an attraction," Meninga said.

Meanwhile, Sam Burgess also confirmed he met with Fifita last December for South Sydney, but said the door had been closed with Jai Arrow signed for 2021.

"He's a wonderful player, I wish him all the best in the future. I just went up to see what he was all about and meet him as a person."

But regardless, former Brisbane assistant and Fifita's Origin coach Kevin Walters insisted he didn't believe Fifita would leave the Broncos.

"He's been in that club for a long time and I'm sure that he really loves being around the place," Walters said.

"It's going to take something really special to get him out of that situation."