The AFL has consolidated a host of awards, usually held at multiple separate functions, into one bumper awards night to be run as a virtual event.

Next Thursday the AFL will broadcast the announcement of the 2020 All-Australian side along with the Rising Star Award, the AFLPA most valuable player award, the AFL Coaches' Association player of the year award and the 2020 Coleman Medal winner.

The AFL, the AFLPA and the AFLCA have come together to expedite the ceremonies because of the coronavirus pandemic. 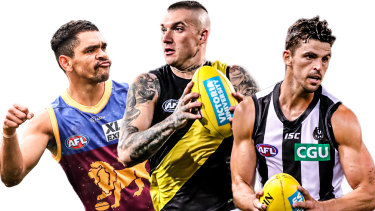 Some of the AFL’s elite.Credit:The Age

The announcement comes after the AFL said they would host the Brownlow Medal as an online event on October 18, instead of holding a function in Queensland, where most of the competition has been based this year.

The bumper awards night will be broadcast on Fox Footy and Kayo at 7.30pm on September 24.

The AFL's general manager of commercial and customer Kylie Rogers said it was a thrill to partner with the AFLCA and AFLPA to stage the event.

“Season 2020 has been like no other, and our 2020 awards season continues that trend,” Ms Rogers said.

“While we won’t be able to roll out the multiple events across the finals, the AFL awards night will be a great production for the fans and importantly honour the achievements of the players across the season.”

The All-Australian awards night is usually broadcast on television from a function. It is, behind the Brownlow Medal, one of the most important celebrations of the year for the players.

“The players have made an incredible contribution to season 2020 and we are excited to celebrate their achievements, and announce this year’s most valuable player, on a night that will bring together the game’s very best," said AFLPA chief executive Paul Marsh.

AFLCA boss Mark Brayshaw added: "It’s great to come together as an industry this year to acknowledge the key performers in the unique season that has been. We look forward to the coaches crowning their 2020 champion."