Michael Jennings couldn’t have been in a better mood.

The Herald caught up with him on September 22, a day after he provided Sport Integrity Australia with an A sample that would subsequently return a positive result to two performance-enhancing substances. 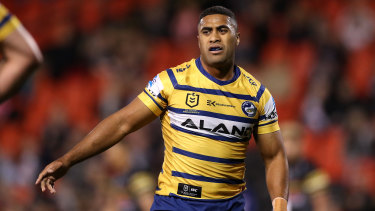 Meanwhile, Jennings’ brother, fellow outside-back George, is being courted by Melbourne. There may not be any Jennings in coach Brad Arthur’s line-up next year.

Jennings was in an expansive mood during our chat at Eels headquarters at Kellyville in September. While Mitchell Moses was minding his 21-month-old son, Carter, Jennings spoke about fatherhood and his post-football career plans.

Carter, he said, had “balanced me out” personally and professionally. “I wish I had a kid earlier to straighten me out earlier,” Jennings said.

He even let slip that he wouldn’t line up against the Wests Tigers that weekend, despite a top-four spot being on the line, in order to manage an old knee injury.

“I’ve got a few knee issues,” he said. “It’s fine, it’s more precaution and being safe to try to get it ready for the finals.

Jennings added he had a “side business” selling steel and was studying building and construction at TAFE with a view to getting into project management alongside his partner, who is a qualified architect.

“You talk about that stuff now because footy is almost coming to an end,” he said.

The end could come earlier than anyone could have expected. Jennings was just beginning to replicate the sort of form that made him an automatic selection for NSW and Australia a decade earlier. It prompted the Eels to offer a contract extension in June, until the end of 2022, a stunning turnaround given he was dropped to reserve grade just 18 months ago.

However, it appears Jennings has now played his last game. The substances he tested positive to are a growth hormone and Ligandrol, the same drug found in the systems of swimmer Shayna Jack and journeyman hooker James Segeyaro.

There is never a good time for a drugs scandal, but the timing of this one couldn’t be worse for the NRL. News of Jennings’ positive A sample came on the day of one of the most anticipated games of the season and dropped just hours before another off-field incident. Tristan Sailor, an emerging NRL player and the son of the legendary cross-code star Wendell Sailor, was arrested and charged with aggravated sexual assault in relation to an incident in southern Sydney last weekend.

That news comes on the back of the serious allegations levelled against Sam Burgess on the eve of the finals series.

Jennings’ suspension left the Eels scrambling for a back-line replacement, not just for Saturday night but beyond.

Before parting with Jennings last month, The Sun-Herald reminded the Tongan international of a story that The Daily Telegraph had run five years ago. It featured a photo of a shirtless Jennings, muscles rippling, declaring he wanted to keep on playing in the NRL until the age of 40.

“I remember that as well,” Jennings chuckled. “Well I’ve got six more years to hold on. We’ll see what happens.”

It appears he could now finish well short of the mark.