No AFL supporters are stereotyped more than Melbourne’s, yet some of the great characters Martin Flanagan has met in football are Melbourne supporters. With one profile each day in grand final week, he tells the stories of a handful of them.

Penny Mackieson always knew she was adopted. Her adoptive parents were from Buchan, in east Gippsland. Buchan was then a Bulldogs recruiting zone and her parents barracked for the Bulldogs. She was from Melbourne. That was all she knew about her origins, and she barracked for Melbourne. 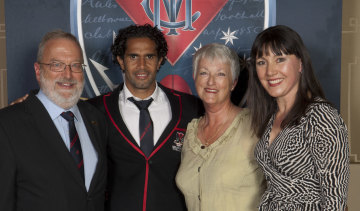 She always enjoyed sport. She played netball but what she really wanted to play was football. At university, she met like-minded women and with one of them, a Collingwood supporter named Dawn Leicester, she wrote a book, “Real Women Love Footy”. She has since written a novel about Tom Wills as viewed by his lover, titled “Dreaming of Tom Wills”. She is a fine writer, marrying intellect and passion. Her third book, about adoption, is called “Adoption Deception”.

Penny describes herself as “a glass half-full person…there’s always someone worse off”. In 1989, she got married – because she was planning to have children, she applied for her official adoption records. Her parents had always said that her natural mother was a schoolgirl from Melbourne’s inner north who went back to school after giving birth.

“The mother in my records had left school and was from regional Victoria. It didn’t match,” she said.

What she calls the next trigger point came in 1997, when she lost twins born prematurely.

“It was the most devastating thing that ever happened to me. I had to rebuild my identity,” she said.

Penny joined Melbourne Football Club and started going regularly to matches. “It gave me a sense of being connected to something bigger and older than me”. And she was fascinated by the game, although she can’t exactly say why because “I fell in love with it before I had words”.

It helped that, on a day when her four-year-old son Paddy was with her, Jeff “The Wizard” Farmer took his famous mark standing on Garry Lyon’s head, right in front of them. Melbourne Football Club is something mother and son share “intensely”. She also started sponsoring the team’s Indigenous players, the first of them being Aaron Davey.

In her 30s, Penny had reached out to the woman identified in her records as her mother, establishing a relationship with her and some of her children.
“But I didn’t look like any of them…it bothered me,” she said.

In 2016, she took a DNA test. The ethnicity of her natural parents was supposed to come from England, Ireland and Wales. The DNA test identified her ethnicity as predominantly Greek.

The Adoption Information Service has since confirmed that she and another child’s identity had somehow been swapped in the hospital during the first three weeks of their lives. She learned her mother had returned to Greece. “I’ve reached out. She doesn’t want to engage,” she said.

Penny Mackieson has a great book within her, a Greek myth about a woman wandering through a labyrinth of identity. It’s an exhausting, dispiriting journey. But, she says, there’s always the footy. “What’s this grand final mean to you,” I ask. “F—, everything….I’ve been looking forward to this all my life”.

Charles Lane played football for Melbourne reserves in the 1960s. He went from there to Claremont in the WAFL. He played against “Polly” Farmer, one of the greatest players of all time, and tells a story of tackling Polly with all the force he could summon “because that’s what you did”. Both players clattered to the ground. “He didn’t say a word to me, he didn’t even look at me. His eyes never left the ball.” 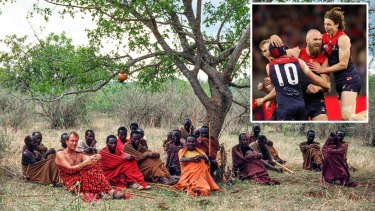 Charles Lane with the nomadic Barabaig people of Tanzania. Inset: Max Gawn celebrates a goal in the prelim final.

In England studying agriculture, he became interested in agricultural aid to the Third World. This led him to Tanzania, where he observed that a nomadic people called the Barabaig were being dispossessed of their lands in the same way that the nomadic people of Australia were.

The Barabaig, who had a fearsome reputation, had a cultural practice of rewarding those of their number who killed enemies of the tribe, be they animal or human, with livestock and “girlfriends”.

Charles Lane lived with them for two years, organising a legal defence of their lands and travelling to Canada to agitate politically against the Canadian corporation supporting the Tanzanian government turning the Barabaig’s land over to wheat farmers.

The result was him having a price put on his head. In 1999, he returned to Australia with his wife Jane Tewson, a no less remarkable character and the subject of my last book, The Art of Pollination.

Charles is a shrewd observer of sport generally. I appreciate our conversations because of the perspective he brings. Three years ago, we were watching a Demons game together on TV and I said, “What would the Barabaig call sport?” He thought, then said smiling, “hunting elephants”.

I said, “Did you ever go on an elephant hunt?” He looked surprised that I’d asked. “I couldn’t keep up with them, not for four days in the bush, on the run, eating berries.”