McLean immediately clutched at his left leg after Sea Eagles hooker Manase Fainu lifted then dumped him awkwardly to complete a three-man tackle in 67th minute of the 22-20 NRL defeat.

Live stream the 2019 NRL Telstra Premiership on KAYO SPORTS. Every game of every round live & anytime on your TV or favourite device. Get your 14 day free trial >

The Cowboys forward, who was in contention to replace injured David Klemmer in NSW’s line-up for State of Origin two, limped off the field.

It meant North Queensland had to play out the match with 12 men having used up all their interchanges.

Scans have revealed McLean has a grade one hamstring injury and will miss this weekend’s clash with Wests Tigers but could be available for a return following next week’s bye.

Green said he’d had discussions with the NRL over the challenge, which went unpunished at the time and didn’t result in any charge by the judiciary for Fainu. 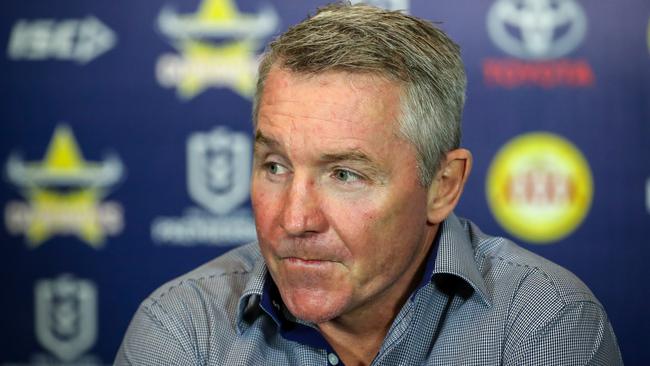 “You’ve got two guys hanging off, basically immobilising the top part of your body, and someone swinging off your legs.

“We’ve seen what it can do to people – Luke O’Donnell had his hamstring torn off the bone here. It’s a dangerous position.”

Dunn will need surgery but Green said it was yet to be determined when that would happen.

“If he gets surgery straight away that will probably be the end of his season,” he said.

‘HE’LL BE A DISTRACTION’: Gould’s stern Origin warning over Latrell

OH NO: Awful Origin stats haunting Cleary as he tries to fight off Pearce