Melbourne defender Steven May has opened up about the “scary” incident from which he temporarily lost his sight in one eye after a stray elbow from Geelong great Tom Hawkins.

May suffered eye socket damage and a concussion in a clash against the Cats at the MCG in round four, when his right eye was bloodied and immediately closed over after he had tackled Hawkins, who was spun around and collected May with his left arm. 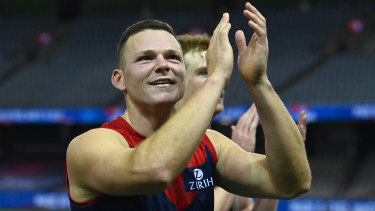 Steven May celebrates Melbourne’s win over the Bulldogs in round 11.Credit:Getty Images

“It was unexpected – I just remember trying to tackle him and the next minute I was on the ground with a swollen face,” May said on Monday.

“I did have a few worries about my vision because I couldn’t open my eye for a few days because of the swelling.

“That was a little bit scary I guess because I had never been in that situation. But the doctors assured me that I would be fine and it’s just swelling.

“I was lucky enough to get back in a couple of weeks and get back into the team because, when the team is going well, it’s where you want to be, be a part of it.

“It seems to be healing nicely now. (I) had my check ups with the surgeon, everything looks all good apart from a little scar.”

Despite fears he would be sidelined for a month after surgery, May missed only the one match, against Hawthorn, and was also able to pass concussion tests in time to face Richmond.

“Just being able to open your eyes was a huge relief,” May said.

Hawkins, who apologised to May as he lay on the turf, later sought the Demon’s number through Shannon Byrnes, the former Cat and now Demons’ runner, and twice checked in on the former Gold Coast Suns co-captain.

“I have played on ‘Hawk’ for most of my career. He is a terrific competitor, a very humble man, and it was an accident,” May said.

May was understandably keen to return to a side that is now sitting outright on top of the ladder with a 10-1 win-loss record.

Having already disposed of fellow premiership fancies the Tigers and Western Bulldogs, the next challenge is a surging Brisbane on Friday night, a clash that was scheduled for Alice Springs but increasingly appears set for Sydney.

The Demons and Lions are elite in several statistical categories. The Demons are ranked fifth in points for and second for points against, but one area of major development has been their ability to score from intercepts and turnovers. They are second in scores from intercepts differential, outscoring their opposition by 20.5 points per game, according to Champion Data.

Jake Lever, who has the most intercepts of any player ever after round 11, and May have been central to this.

“The intercept marking is actually a reflection of our pressure up the field,” May said.

“Our whole back six really relish the opportunity to intercept the ball and help propel our attack, but it’s nowhere without our forward pressure and our mids getting back to help.”

The Demons have also made it a priority to man-up and work hard on defensive transition, a selfless attitude which hadn’t been always been a trait. 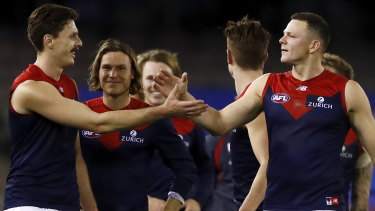 Jake Lever and Steven May make up one of the AFL’s most formidable key defensive duos.Credit:Getty Images

Hard-running wingman Ed Langdon, an unheralded star this season, will miss this week because of concussion but it could allow Nathan Jones or Oskar Baker to return.

“Having (assistant coach) Adem Yze come in and put a different spin in the midfield … took a little bit for us to understand, but I think everyone is really grasping the gameplan now that the coach (Simon Goodwin) is putting together. We have a lot of belief – we believe that we can beat anyone given we play the right way.”