GWS have warned Hawthorn they won't snare former No.1 draft pick Jonathon Patton in the AFL trade period for a bag of chips and a can of soft drink.

Fellow top draft pick Tom Scully switched from the Giants to the Hawks during last year's trade period for a lowly fourth-round draft pick because of doubts over a serious ankle injury and with GWS keen to offload his salary. 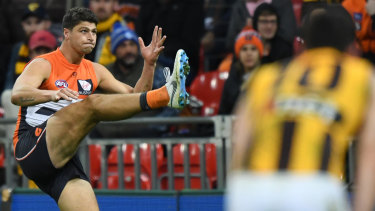 The general strikes: Jonathon Patton will not come cheap for the Hawks.Credit:AAP

"We understand Jon wants a fresh opportunity and we'll work with [the Hawks] on what's fair and reasonable.

"We know he unfortunately has suffered three knee injuries, but we also know that pretty much the reason he didn't play the back end of the year was more mental.

"Physically he is absolutely flying so we're conscious of that.

"We'll work closely to help facilitate what Jon wants but we do want to make sure that we get something back that's going to be worthwhile that we can use as part of our strategy going forward."

Adam Tomlinson has already departed the club smashed by 89 points by Richmond in the grand final, the versatile tall joining Melbourne as a free agent.

The Giants received an end-of-second-round draft pick as compensation for his loss and will look to safeguard that pick by working a trade with Adelaide for Sam Jacobs instead of signing him as a free agent.

GWS won't be prominent players in this AFL trade period with their priority securing stars Jeremy Cameron and Lachie Whitfield to contract extensions.

McCartney is quietly confident both will pledge their futures to the club sooner rather than later.

"Until people sign, obviously you never know but we've got no indication from Lachie or his management that he wouldn't be signing on," he said.

"With Jeremy, we really did want to leave him alone this year.

"But the indications post-grand final are that that's ready to kick up a gear now and we're ready to progress those discussions."

McCartney also revealed the club is keen for veterans Shane Mumford and Heath Shaw to play on next year and will watch on with interest as cross-town rivals Sydney attempt to land contracted Essendon forward Joe Daniher.