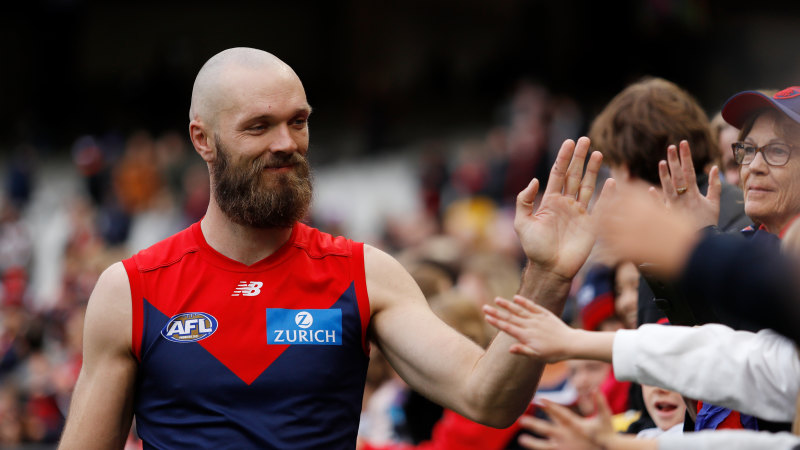 Gawn had been in some doubt after going in for scans on his knee on Monday. He hurt himself against St Kilda on Sunday afternoon. 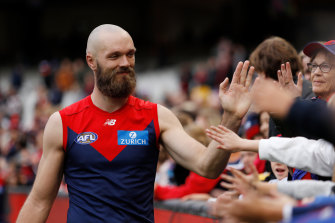 Max Gawn will travel to Perth to play West Coast after undergoing scan on his knee on Monday.Credit:AFL Photos

However, Goodwin said in his Thursday morning press conference the Demons captain would play against the lowly West Coast on Sunday evening at Optus Stadium, and he did not consider resting him.

“We certainly wouldn’t risk anyone that had any injury and put them out there – there is no question about that. [But] we are not in the process of resting players,” Goodwin said.

Multiple ruckmen across the AFL have injured their PCL ligaments this season, but Gawn insisted earlier in the week he did not have a knee issue.

Meanwhile, Richmond will welcome back premiership players Prestia and Vlaustin for their match against Hawthorn on Saturday afternoon, but will lose emerging defender Gibcus due to COVID-19 protocols.

Prestia missed Richmond’s 27-point win over Collingwood last Saturday afternoon due to illness and had also been battling Achilles soreness, which forced him to be substituted in round seven against West Coast.

Vlastuin missed last round due to illness but has since recovered, while Gibcus will miss after playing all but one game for the Tigers so far in his debut season.

“We haven’t had all our very best team playing together for a period of time,” Hardwick said. “So we’re starting to get that now, but it does turn pretty quickly at various stages.”

Dashing Tigers defender Hugo Ralphsmith will return via the VFL this weekend after he recovered from breaking three ribs against Melbourne in round six. 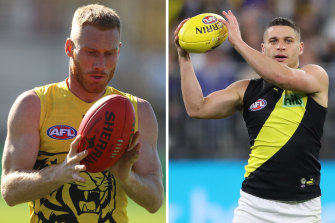 Nick Vlastuin and Dion Prestia will return this weekend.Credit:The Age

Hardwick said veteran midfielder Kane Lambert is also “week-to-week” as he manages an ongoing hip injury that forced him to miss the start of this season. The Richmond coach said if Lambert gets through training, he was “always in my side”.

“It’s an incredible example for any player that probably didn’t think they had a chance, but when they do get the chance, of how to stay in there. Any other player wouldn’t be playing, guaranteed,” Hardwick said.

Hardwick also said young defender Rhyan Mansell had apologised to him after being suspended for one match for striking young Collingwood forward Jack Ginnivan on Saturday afternoon.

“The fact of the matter is, for Rhyan Mansell to succeed he’s got to be tough and uncompromising. Now, he overstepped the line. Every now and then, players are going to do this,” Hardwick said.

Essendon coach Ben Rutten said all five late withdrawals before the Bombers’ impressive 27-point win against Hawthorn last weekend have recovered from illness and will be available for selection.

Defender Jordan Ridley, livewire Matt Guelfi, defender Jake Kelly, wingman Sam Durham and forward Alec Waterman were withdrawn with an illness that has been circulating around the club.

Rutten also said young forward Harrison Jones was “at that point where he probably could play,” but the Bombers would ease him back after a long-term foot injury.