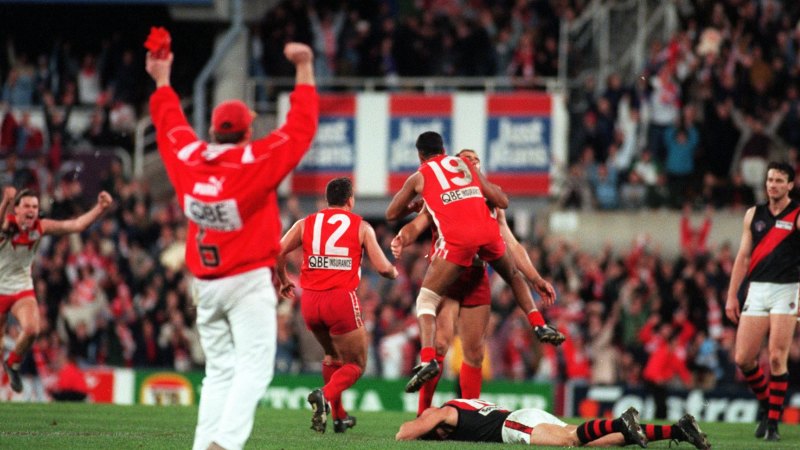 Swans snatch it in dying seconds

North Melbourne may beat Sydney in next Saturday’s grand final, but the Roos will want to be more than a few goals in front with fewer seconds left on the siren before they start popping the champagne corks. 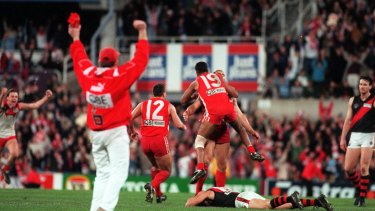 Sydney Swans players congratulate Tony Lockett after he kicked a behind to put them through to the grand final.Credit:Steve Christo

The Swans overhauled Essendon’s five-goal lead at the SCG back in round six and scraped a draw. Last night against the Bombers, they pulled back a four-goal break early, then a two-goal deficit with only four minutes remaining. And this time, the stakes – a grand final berth – could not have been higher.

Essendon had begun the game in much the same fashion as its huge win over West Coast last week, and left not only the Sydney crowd, but the Swans themselves, shellshocked.

The Bombers had three goals on the board within 10 minutes, one to Steve Alessio, one to James Hird, and the third after a towering mark on the goalline by youngster Justin Blumfield.

Sydney had already moved Andrew Dunkley on to Hird and Paul Roos elsewhere, and when Che Cockatoo-Collins kicked truly from 50 metres, the Dons led by 25 points and the Swans were in desperate trouble, and lacked composure and certainty.

But as quickly as Essendon racked up its lead, the Swans began to restore the balance. Sydney had the greater share of possession in the final 10 minutes of the first term, with the only tangible result a goal after Dale Lewis drifted across the front of a pack to mark. 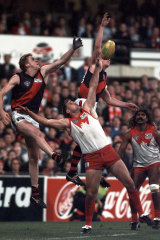 The Swans and the Bombers final.Credit:Joe Armao

But Sydney completely took over from the start of the second term, and the catalyst was its skipper Paul Kelly, who shrugged off Blumfield’s tag, then began to make short work of Chris Daniher.

It was Kelly who brought the Swans back within 12 points with a goal only two minutes into the term, Daryn Cresswell added another, then Essendon suffered another blow when Dean Wallis, who had handled Tony Lockett well, left the ground injured, forcing the Bombers to shift Dustin Fletcher back into defence.

Lockett took a strong mark and goalled minutes later to put Sydney in front, Troy Luff snapped another after Lockett had barged a path through a wall of defenders, and when Cresswell snapped another brilliant goal, Essendon had fallen two goals in arrears, its first score for the quarter coming only at the 21-minute mark of the quarter.

Sydney went into the long break with a two-goal break, only 10 goals scored because of the intensity of the match. The pressure continued after the break and late in the term Sydney had increased its lead to 19 points, with the Bombers goalless for nearly two quarters.

True to form, Essendon came again, with the last three goals of the third quarter, and so began one of the most gripping last quarters in recent finals history.

Bomber champion James Hird, relatively subdued in the game’s middle, took charge, putting the Dons in front with a snap just two minutes in. Play then see-sawed for a full 20 minutes, Essendon’s Michael Symons failing to score from a set shot only 25 metres out, but then snapping an amazing banana goal on the run to give the Dons a 12-point lead with only four minutes to play.

But, as Essendon had already found to its cost a few months back, that was hardly likely to be the ball game. Sydney skipper Paul Kelly, inspirational all night, found Stuart Maxfield, whose surging run ended with a goal-square mark to Dale Lewis and a goal.

Then the man whose groin has had this whole city preoccupied for the past week decided to play his part in the fairytale. With less than two minutes remaining, Tony Lockett marked 45 metres out on a tight angle and centred the ball to Daryn Cresswell. His shot appeared to be hooking left but drifted inside the goalpost at the last moment.

Essendon parried the ball forward ever so slightly, but just as extra time appeared a formality, Swans’ youngster Wade Chapman, who had played a major role in getting his side back in the contest, grabbed the ball and Lockett, injured groin and all, set off on a lead that finished with the ball on his chest 55 metres from goal, 13 seconds left on the clock, Essendon players slumped to the ground, and a rabid crowd nearly hysterical. 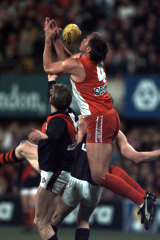 Tony Lockett goes up for a mark.Credit:Joe Armao

In scenes reminiscent of Gary Buckenara’s famous after-the-siren kick to win the 1987 preliminary final for Hawthorn against Melbourne, Lockett’s shot sailed just left of the goal, but post high, as most of his teammates piled on top of him.

It was a remarkable finish from a side which appeared again to have costly stage fright early, and for its recovery the Swans can thank Kelly, who gave 100 percent all night, but also some of its less-heralded players, such as Chapman, who had barely played in the last two months of the season, and Michael O’Loughlin, while little man Simon Garlick managed to keep a tight rein on Darren Bewick.

Some of the Bombers’ best last night were also lesser names, in particular defender Damien Hardwick and Barry Young.

Essendon will be pondering the twists and turns of luck in finals football after losing two games by one point and earning a fortunate home final in-between, but again the Bombers’ inability to play four consistent quarters brought it undone.

It will also be thinking about a side which will go into its first grand final a raging underdog, but one which keeps biting to the very end.