Jamal Fogarty knows struggle, and it’s not having to wait until 26before finally establishing yourself as an NRL player.

His version of doing it tough are kids living day to day, in and out of detention and just trying to find their place in the world. 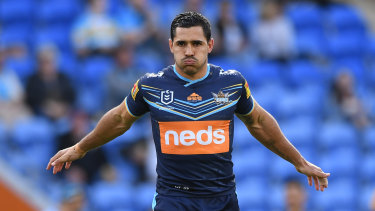 “They’re just fighting for survival every single second of the day.

“In Australia, we complain about the things we don’t have. We can be so greedy and ungrateful, but the guys I worked with … they’re just grateful to have clothes, a pillow and sleeping bag in their backpack so they can sleep in the bushes at night. It’s just survival mode all the time.

“That keeps you really grounded about how hard they actually have it.”

While Fogarty was forced to give up his youth justice work when he signed a full-time deal with the Titans last year, he still keeps in contact with a lot of the kids’ mentors.

It’s part of the reason why he is so respected at his club, rising from a development contract at the start of 2020 to captaining the Titans by the end of the season.

He made his first Indigenous All-Stars appearance earlier this year, and has earned so much respect within his community he is well on the way to becoming an Elder. Titans rookie Jayden Campbell, the son of All-Stars architect and former Dally M Medal winner Preston, already refers to Fogarty as an Elder.

Between Fogarty, Tyrone Peachey, David Fifita, Brian Kelly and Corey Thompson, there are strong Indigenous links between the Titans and their community.

This week, Fogarty has heard players like Rabbitohs gun Cody Walker talk about the health and mortality rates of Indigenous people lagging behind non-Indigenous races. He knows that needs to change, which is why he would love to one day return to working with the kids living vulnerable lives.

“You build genuine relationships with these kids and I still think about them all the time,” Fogarty said.

“We get blokes [at the club] who are tired, sore, [they might say] ‘I don’t really want to train today, I want to go home early’. We complain about what we have for dinner or if we get a certain food at training, but the kids I worked with they don’t have choices. There’s no option A, B or C.

“It’s about giving them hope and allowing them to chase their dreams.”