Jeremy Finlayson has recommitted to Greater Western Sydney for the next three years, signing a contract extension until the end of 2023.

Rival clubs believed as recently as this week that 24-year-old forward Finlayson – who has been dropped this season by coach Leon Cameron – was gettable. 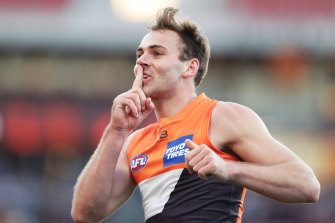 It's been a busy week for the Giants, with defender Aidan Corr announcing to his teammates that he will be leaving the club this season and exploring free agency.

Corr has nominated North Melbourne has his preferred club.

Pokies, politics and a pen: Inside the dogfight for power at Canterbury

Maroon Mahoney has an eye on Origin