West Coast amplified their premiership credentials on Saturday night, staring down a fierce challenge from Geelong to beat the Cats in one of the best games of the 2020 season.

Geelong were patient when picking their time to attack and were manic when pressuring the Eagles in the contest, dominating the final phases of the game, but West Coast held their nerve in a frantic final term. 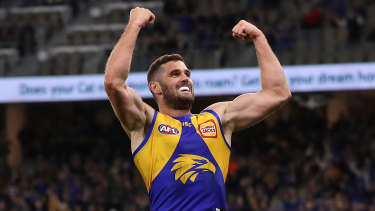 Beloved Eagle: Jack Darling helped get West Coast over the line against a gallant Geelong.Credit:Getty Images

Josh Kennedy, held well for three quarters by Harry Taylor, kicked three goals in the last to drag his team across the line.

His mark and set shot conversion with under two minutes left was the sealer, a rare moment where the ball was forward for the Eagles as the Cats relentlessly pressed their opponent's goal.

West Coast surged in the second half after trailing by 21 points early in the third term when Zach Tuohy kicked his second of the night.

In response the Eagles tightened up their work at the contest – breaking from stoppages at will thanks to Nic Naitanui's deft taps and Luke Shuey's bursts – and tidied up their kicking efficiency. 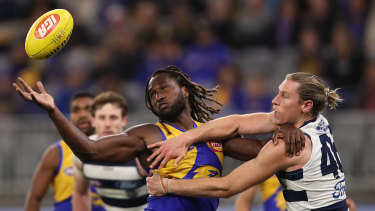 Top tap: Nic Naitanui gets the better of Geelong’s Mark Blicavs in a ruck contest.Credit:Getty Images

They kicked three in response, including one late in the term to Brendon Ah Chee which was the spur they needed to really capitalise on their dominance in the term.

But the Cats hung around, with a goal minutes prior to Tom Hawkins and regretably, two set shot misses via Gary Rohan and Esava Ratugolea.

Nic Naitanui didn't have many touches but his tap work was influential in the face of a two-pronged ruck assault from Mark Blicavs and Esava Ratugolea.

The Eagles became only the second team to win a game this year when trailing at three-quarter-time (the other was North Melbourne against St Kilda in round one), kicking seven of the last nine goals of the match. 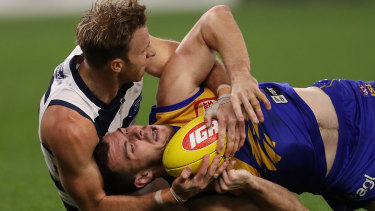 They also had to win with one less on the bench when first gamer Harry Edwards went off with concussion early in the game.

Geelong battled valiantly in the final term and an early goal to Sam Simpson that just came off his boot put them eight points ahead after Kennedy kicked the first of the final term and the Eagles' surge seemed set to earn them a win.

But this hardened Eagles side backed by a ravenous crowd stood up to the Cats challenge and showed that with the luxury of being able to play most of the rest of this season at home, they could be hard to beat to the flag.

That Geelong was able to get so close to a win without Joel Selwood, Gary Ablett and a really influential effort from Patrick Dangerfield will be the positive from the loss.

Remember the good old footy sub-plot? Those games within games we once spent the week focusing on, before the coronavirus pandemic?

Tim Kelly, and whether he'd join the West Coast Eagles from Geelong, used to be one of those. 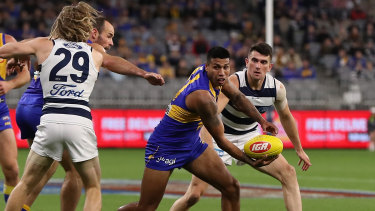 He ended up leaving the Cats after two seasons for family reasons to join the Eagles in 2020 and on Saturday night – with very little fanfare foreshadowing the clash because sub-plots don't get the focus they once did – he played his old side.

Kelly made up for the modest build up instantly, zipping from the centre square and hitting Josh Kennedy in the goal square for the opening goal; a dynamic bit of play he blessed Geelong with from the moment he arrived there in 2018.

He was excellent for the Eagles from that moment on. His work when the ball broke from congestion to space and some of his one touch gathers at pace were stunning.