Lachie Plowman has failed in his appeal against a two-match ban for a bump that concussed Hawthorn’s Jaeger O’Meara.

The AFL appeals board on Thursday – chaired by Murray Kellam alongside Stephen Jurica and Geoff Giudice – deliberated for 70 minutes to come to the view that Tuesday’s tribunal decision could not be overturned. They will publish their reasons in due course. 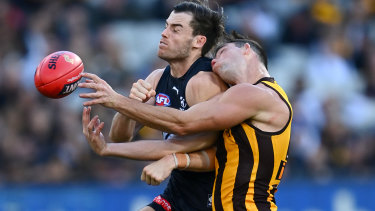 Lachie Plowman and Jaeger O’Meara collide during round 10. Credit:Getty Images

“Whilst there may be legitimate grounds for criticism for part of the jury directions, we considered there’s no basis to say any such error justifies the reversal or modification of the tribunal decision,” Mr Kellam said.

The match review officer initially deemed Plowman’s bump to be careless conduct, high impact, and high contact and suspended him for two matches on Sunday, while the tribunal found him guilty of rough conduct when he challenged on Tuesday.

Carlton’s lawyer Peter O’Farrell was appealing on behalf of Plowman on Thursday on the basis that an error of law had occurred in the previous hearing.

In that hearing, tribunal chair Ross Howie directed the jury to not consider the Plowman-O’Meara collision as a marking contest, but as a bump. Mr O’Farrell said this had “infected” the jury’s verdict and that Plowman’s conduct was “reasonable” in the circumstances.

That ruling stunted Carlton’s argument on Tuesday, given they believed it was not a reportable offence because the collision happened in an action that was incidental in a marking contest (where the ball was within five metres) as stated in the tribunal guidelines (as permitted contact).

So on Thursday, Mr O’Farrell began his argument quoting the laws of Australian Rules football where, he said, it described a marking contest. He called this “the spirit and intention of a marking contest”.

“If someone has got eyes for the ball, they ought not be penalised,” he said.

Mr O’Farrell, quoting from the laws of the game, said: “Where a players sole objective is to contest or spoil a mark, that player should be permitted to do so.”

Therefore, he said, “the chairman erroneously applied the laws of football”.

Mr O’Farrell also said it was wrong for the AFL to start with the injury sustained, and work back from there to determine if Plowman had committed a reportable offence.

Appeals board chair Mr Kellam admitted Mr Howie was wrong to direct that the Plowman-O’Meara collision could not be a marking contest.

But AFL counsel Mr Gleeson said that did not render the decision void, because it was still a bump. Because that bump caused forceful contact it still was rough conduct and therefore reportable (hence not permitted contact), he said.

“There may be circumstances where it’s not reasonable to contest the ball in that way. That’s in our laws,” Mr Gleeson said.

Appeals board chair Mr Kellam had earlier said: “The fact that contact happens in the course of a contested mark doesn’t mean it is permitted”.