Greater Western Sydney are expected to recall dropped skipper Stephen Coniglio for the final round against St Kilda but will not make a definitive call until the selection committee meets on Wednesday.

After the club's shock decision to leave the 26-year-old out, the Giants lost their vital match against Melbourne at the Gabba on Saturday night.

The loss virtually ruled the Giants out of finals calculations for the first time in four seasons and just one year after they made the grand final for the first time, with several results needing to fall their way for them to reach finals in 2020. 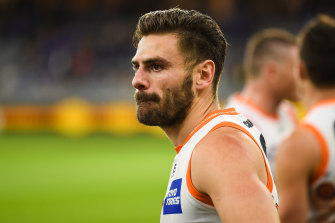 Stephen Coniglio was the first AFL captain in 22 years to be dropped.Credit:Getty Images

Coniglio's omission from the team in such a crucial encounter was a major surprise because although his form has been well below par he has not been alone in his struggles, with few of the team's big names performing to their capability.

Other clubs are certain to inquire about Coniglio's commitment just 12 months after he signed a lucrative long-term deal, knocking back huge offers from other clubs including Hawthorn to remain with the Giants, who drafted him from Western Australia.

But the club are adamant that although the decision was based on form it was not an emotional one without consideration as to how it might impact on the club. Coniglio was the first AFL captain to be dropped for 22 years. The Giants also have several decisions looming at season's end with free agent Jeremy Cameron yet to sign while they have a raft of young midfielders out of contract, including Jye Caldwell, who St Kilda is interested in, Jackson Hately and Xavier O'Halloran.

Jeremy Finlayson is also potentially gettable, although he has returned to the team in recent weeks.

‘We can make history’: Roosters ready to atone for Souths annihilation