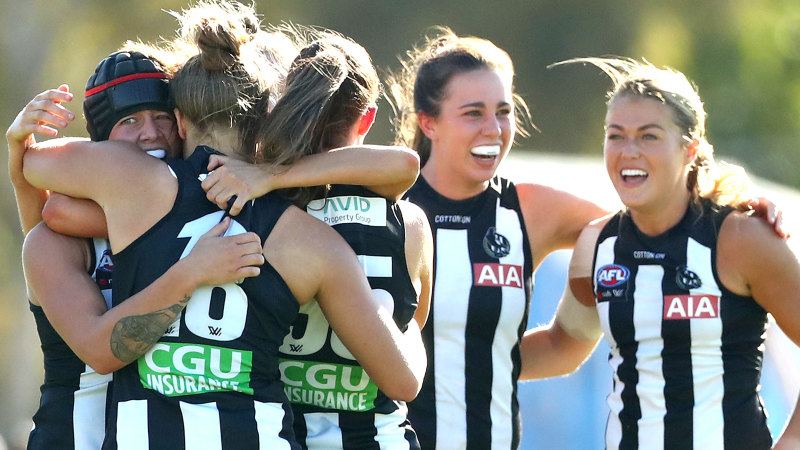 Collingwood will face Brisbane in a preliminary final next week after handing North Melbourne a single goal loss on Saturday in a thrilling contest played in 32-degree heat at Victoria Park.

The famous Brown name again resonated at the historic Collingwood venue after Tarni Brown, daughter of club great Gavin Brown, roved the pack to boot the final goal that put the Magpies in front.

In the first men’s or women’s final at the venue since 1904, the Kangaroos entered the match off the back of a one-point win against Fremantle, claiming the last finals spot. Collingwood had fallen to Adelaide, conceding a top-two finish.

With former Kangaroos coach Scott Gowans now in the Pies’ coaching stable, Collingwood were hungry for redemption from the two-point loss in last year’s semi-final. 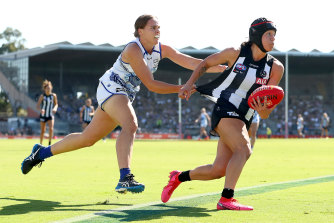 The Pies got on the board early thanks to Sophie Alexander, North’s skipper Emma Kearney hobbling off with an ankle complaint. A tight goal from the boundary from Kangaroo Jasmine Garner opened their account, and further good luck saw Kearney return to play.

Gun Magpie Chloe Molloy snapped a major for the home team with help from teammate Ruby Schleicher, consistently delivering inside 50s. Jaimee Lambert was the beneficiary of repeat entries, sending the ladies in black and white 14 points ahead at the first break.

The Kangaroos put their foot on the pedal, Bethany Lynch soccering through her first AFLW goal, Sophie Abbatangelo followed booting North Melbourne’s second in a minute from a clean centre clearance and mark. The Pies couldn’t convert at all, leaving them just three points ahead at the main break.

Star midfielder Ash Riddell extended the Kangaroos’ lead, the Pies replacing Ruby Schleicher with Molloy as they clambered for possessions. Alexander made it happen for Collingwood, slotting their first goal since the first term. Kangaroo Aileen Gilroy drove the ball inside 50 to gift teammate Daria Bannister a goal from her first touch for the day. It was 12-5 inside 50s to the Kangaroos at the final break, despite Collingwood’s Brianna Davey leading disposals with 23 at three-quarter-time, (31 on the final siren).

Collingwood accelerated, Kristy Stratton got her first AFLW goal, closely followed by Molloy and Tarni Brown, putting Collingwood in the lead by a goal. It came down to a race against the clock but the Pies on home turf.

“Once we start getting used to the pressure and what the opposition can throw at us we do have the ability to come back, we have had practice in this and that’s what happened today,” said Collingwood’s head coach Steve Symonds.

“I have a rule – the first 24 hours after a win we have to enjoy that, the players should go out for dinner with their friends and family and then tomorrow we regroup and focus on Brisbane.

“Brisbane are a good team, they’re very even across the board, they don’t have any passengers in their team.“

BROWN FAMILY RETURN TO VICTORIA PARK
Last time the Kangaroos played at Victoria Park was in Round 10, 1993. Gavin Brown was playing that day for the Pies. His daughter Tarni made history as the club’s first father-daughter pick and ended the game with 12 disposals and that final goal.

ASHMORE MAKES HISTORY
Kangaroo Kaitlyn Ashmore has become the first AFLW player to reach the 40-game mark after 16 games at Brisbane and 23 at the Kangaroos. The ex-javelin thrower gave up her Olympic dream to play footy.