Code-hopper Grace Hamilton has revealed her nerves walking into her first NRLW clash this weekend after being named on the bench for the Roosters.

On the back of a win over St George Illawarra, the Tricolours will face the New Zealand Warriors at Bankwest Stadium with Wallaroos captain Hamilton on the bench. 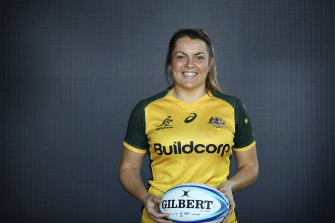 Hamilton was selected to play for the Wallaroos in 2016 before being named captain in 2019.Credit:James Alcock

A number of girls have made the code switch in the meantime, with round one seeing the NRLW debuts of Charlotte Caslick and Ellia Green. Hamilton said while she had played against Caslick in rugby, they had never been in the same team.

She also said that while she always wanted to play league, clashing schedules never made it possible.

Upon hearing the Test matches were called off, Hamilton said she jumped at the chance to play in the NRLW.

"I was a bit nervous coming in [to the NRLW] as the girls know that [union] was also going to be my priority," she said. "There are a lot less rules in rugby league, which is nice."

Hamilton was selected to play for the Wallaroos in 2016 before being named captain in 2019. She also won two premierships with the NSW Waratahs in the Super W.

If Hamilton remains off the bench for the NRLW's round three, she will play close friend and Wallaroos teammate Millie Boyle.

For now, Hamilton joked she was "absolutely" on a mission to recruit as many players from the NRLW to her own code. She said many of her teammates at the Roosters started out in rugby and made the switch to league.

Ian Watson commits himself to Salford after rejecting Hull approach