Geelong are aiming to bulletproof dynamic midfielder Nakia Cockatoo before they unleash him in 2020 as he continues to put together a solid pre-season.

Cockatoo has had an injury-riddled career at the Cats playing 34 games. He has not played a senior match since round three in 2018, with a series of soft tissue injuries hampering his progress.

Geelong has been cautiously optimistic about his progress this pre-season but midfielder Patrick Dangerfield said they are not going to be rushed into playing the 23-year-old. 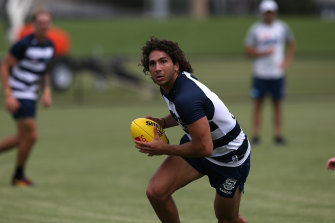 "He is a supremely talented player that, at his best, can really change the dynamic in our forward line and midfield but we have got to make sure we bulletproof him enough so he can do that for sustained periods of time," Dangerfield said.

"We will build him up slowly so he can withstand a full season."

Dangerfield said champion midfielder Gary Ablett would be managed in a manner that allows him to be at his best when he takes the field in 2020 after he battled to have an impact in last year's finals.

Ablett is not expected to play every game after missing just one match – through suspension – in 2019. 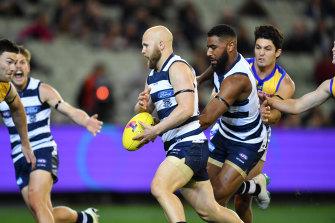 "He's not a spring chicken any more, Gaz, but he is one of the greatest players to have ever played the game," Dangerfield said.

"We have to make sure we are getting that as consistently as we can but also understanding that his body isn't like it used to be. We are really respectful of that."

Meanwhile, underrated Cats midfielder Mitch Duncan remains uncertain when he will rejoin main training. Geelong are unsure whether he will be available for their round one clash against Greater Western Sydney. 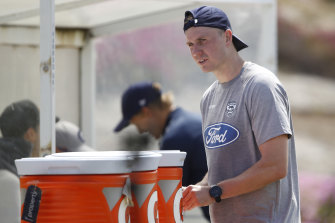 Mitch Duncan looks on during a pre-season training session at Geelong.Credit:Getty Images

The 29-year-old is optimistic that he will go close but will not rush back to play in the opening game.

"We just have to play it week-by-week and see [how] the hip’s pulling up and how it’s progressing," Duncan said. "Everything so far is heading in that [round one] direction. But we do get fixated on round one a lot. We just have to be smart with our decision."

Duncan was injured early in last year's qualifying final against Collingwood and missed the next two weeks with a knee injury.

Basketball: Giannis shines as Bucks hold on, Harden nets 49 as Rockets blast off