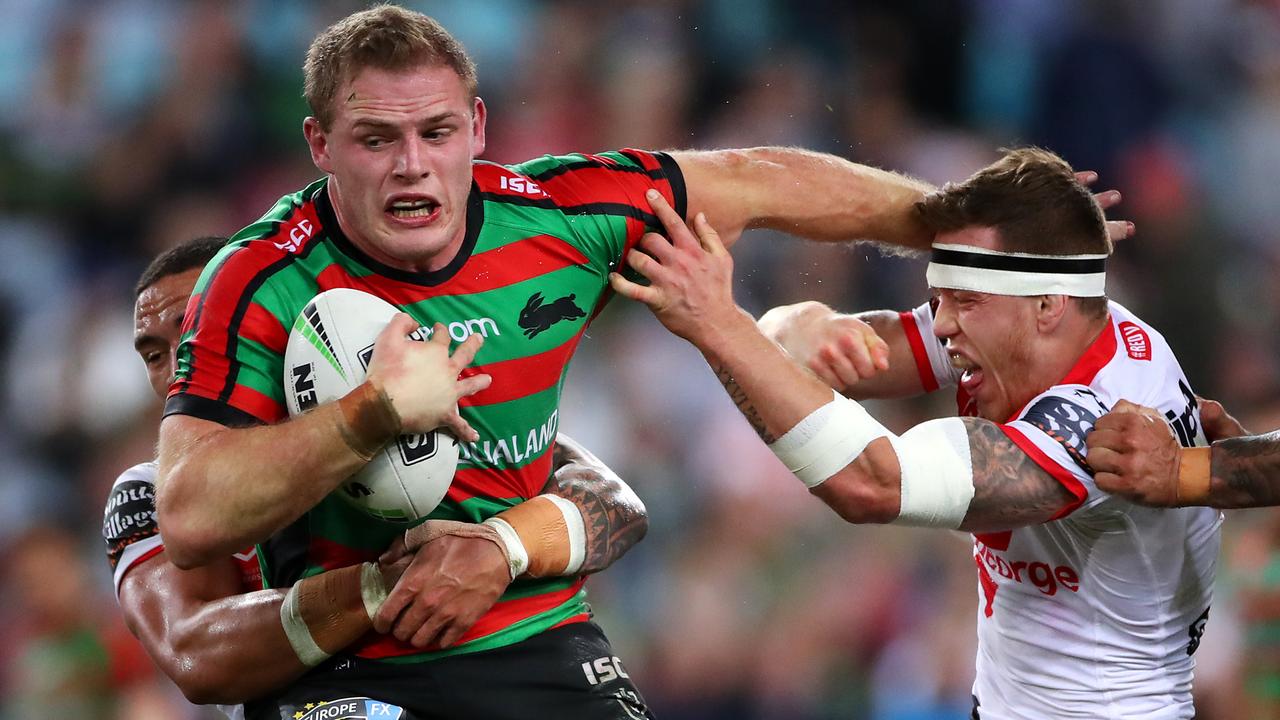 Former Souths star George Burgess is looking for a return to the NRL at a non-Sydney based club.

Meanwhile the Bulldogs have responded to the Tigers’ play for Dallin Watene-Zelezniak.

Read on for all the latest NRL Transfer Whispers.

REVEALED: How Sharks pulled off $1.8m coup and stole star from under rivals’ noses

TEAM ANALYSIS: Mahoney in for rejigged Parra as Panthers decimated by Origin

NRL: Felise Kaufusi has beaten a tripping charge that would have seen him suspended from the first Origin clash….

NRL: Felise Kaufusi has beaten a tripping charge that would have seen him suspended from the first Origin clash.

The 29-year-old twin brother of Souths prop Tom and sibling of former skipper Sam has not played since a hip injury ended his eight-game stint with Wigan in 2020.

However Channel Nine’s Danny Weidler reported Burgess is looking to live outside of Sydney making a reunion with the Rabbitohs unlikely, with the Dragons early frontrunners for his signature.

“George Burgess is looking at an NRL comeback – not after big dollars,” Weidler tweeted.

“He feels incredible after hip surgery. Looking at living outside of Sydney. Hearing of an informal discussion with the Dragons.”

BREAKING: George Burgess is looking at an NRL comeback – not after big dollars. He feels incredible after hip surgery. Looking at living outside of Sydney. Hearing of an informal discussion with the Dragons. @[email protected]

Burgess last featured in the NRL in 2019, playing the last 13 of his 149 games for South Sydney before moving home to the UK.

Burgess debuted for the Rabbitohs in 2012 and was a member of their premiership winning side in 2014.

The Dragons desperately need to bolster their pack after fading from the top four in Round 5 to lose six of their last seven games.

‘BEING A JERK’: Gould’s bizarre Twitter meltdown over concussion ‘hysteria’

Canterbury fullback Dallin Watene-Zelezniak has responded to claims he is in talks with the Tigers about a mid-season move away from Belmore.

The Daily Telegraph reported the 25-year-old has been approached by the Wests Tigers regarding an immediate switch of clubs despite being contracted until the end of 2022.

It’s reported Michael Maguire, who coaches Watene-Zelezniak in the New Zealand national side, is eager to sign the former Panther to a long-term contract as he continues his Tigers rebuild.

The veteran of 143 NRL games was close to signing with the Tigers in 2019 when he left the Panthers, before signing an 18-month contract with the Bulldogs and then inking a two-year extension on top of that deal.

State of Origin: Payne Haas and Tino Fa’asuamaleaui have reignited their feud ahead of Origin I….

State of Origin: Payne Haas and Tino Fa’asuamaleaui have reignited their feud ahead of Origin I.

The former Kiwis skipper took to Instagram to declare he is committed to seeing out the remainder of his deal at the Bulldogs.

“We may not be winning games but I love it at the Bulldogs and the challenge that is ahead of us. The tougher the journey the better the outcome.”

However Watene-Zelezniak’s denial of the Tigers move comes despite Bulldogs CEO Aaron Warbuton confirming an approach was made to the club.

“There has been an inquiry by the Tigers with regard to Dallin and that’s all that’s taken place,” Warbuton told the Telegraph.