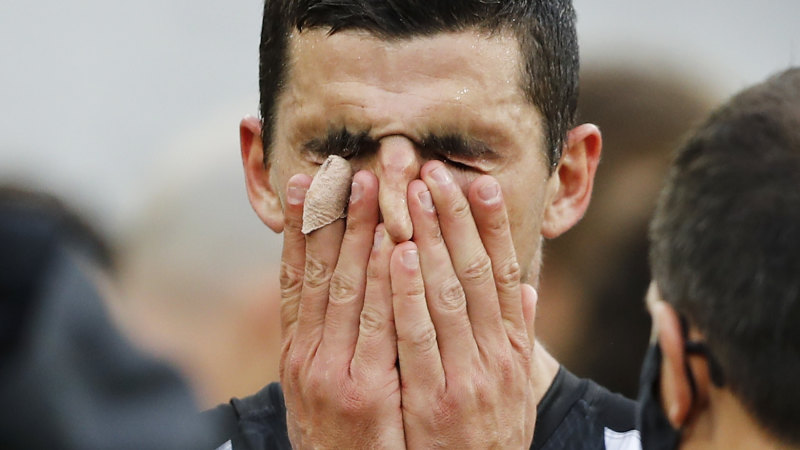 Collingwood coach Nathan Buckley has revealed captain Scott Pendlebury is carrying an injury after his struggling side slumped to yet another defeat on Saturday, with star ruckman Brodie Grundy sent to Epworth Hospital for scans on a neck injury.

Grundy pinched a nerve in his neck in a marking contest during the 10-point defeat to Geelong, which left the Pies with a 2-9 record.

“Brodie had his head wrenched back and pinched a nerve in his neck,” Buckley said.

“It presented as a stinger in his right arm but the doc was concerned about nerve damage and he was obviously not able to take part in the rest of the game. He’s in hospital having a scan … it’s a bit of a strange one.” 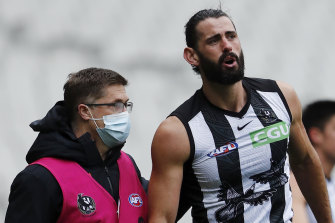 Pendlebury spent most of the game at half-forward, as Collingwood continue to experiment with players in different positions. But Buckley, who wouldn’t reveal Pendlebury’s ailment, said his champion player was not fully fit. At one point during the match, Pendlebury winced, holding his ribs, after copping contact in a marking contest.

“Pendles is probably not at full fitness at the moment and the last couple of weeks he keeps finding a way,” Buckley said.

“Very rarely do players take to the field 100 per cent fit, by the way. He’s a tough unit.”

Asked if he could provide more detail, Buckley replied: “No.

“I can tell you, he put his finger into Josh Thomas’ mouth about three weeks ago before the Sydney game and he had to have stitches into the end of his finger which is manky as all hell already.

“When you’ve been a warrior as long as he has … the bloke, to play as many games as he has at the quality he has, it shows you how much grit, resilience and determination the bloke’s got.”

At 2-9, the Magpies haven’t produced a start to the season this bad since Tony Shaw was coach in 1999. In that year, also at 2-9 after 11 games, the Pies finished with just four wins for the season. 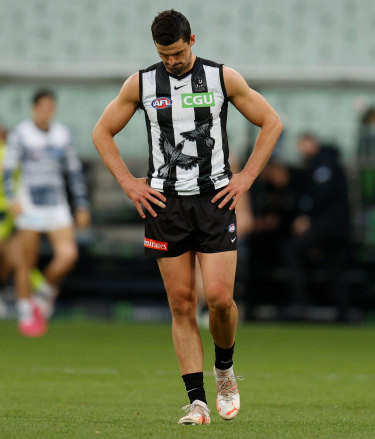 But Buckley was adamant his side has improved over the past four weeks, and despite being goalless in the first half.

“I didn’t think they [the Cats] controlled most of the play at all, I thought we definitely had our fair share of it. Obviously not being able to hit the scoreboard again was a concern for us,” Buckley said.

“We just weren’t able to complete our play in the front third again and we’re just looking for the right mix. The other elements of the game stood up really well.

“We’re still defending really well, we’re hard to score off stoppage, we’re actually moving the ball through the back half a lot better. It’s just that final piece for us.”

The list turnover is evident, with Trent Bianco becoming the seventh debutant this season for Collingwood.

Jack Crisp, Josh Daicos and Jordan De Goey had plenty of midfield minutes, which have long been taken up by veterans Pendlebury and Steele Sidebottom. Brayden Sier also played his best game in 2021.

“There are some elements we need to work on but we’re getting games [into players],” Buckley said.

“Over the last three or four weeks I think we’re tracking in the right direction. We’re playing some pretty good sides and we’ve been very competitive and if we keep focusing on working together and finding our best, the wins will come.

“We want to win games of football but I think the over-arching feeling in the sheds is that we are playing a brand that we are more confident in and more positive about.

“While it’s not getting us wins at the moment, I think the players’ energy and enthusiasm remained for the entirety of the match.”