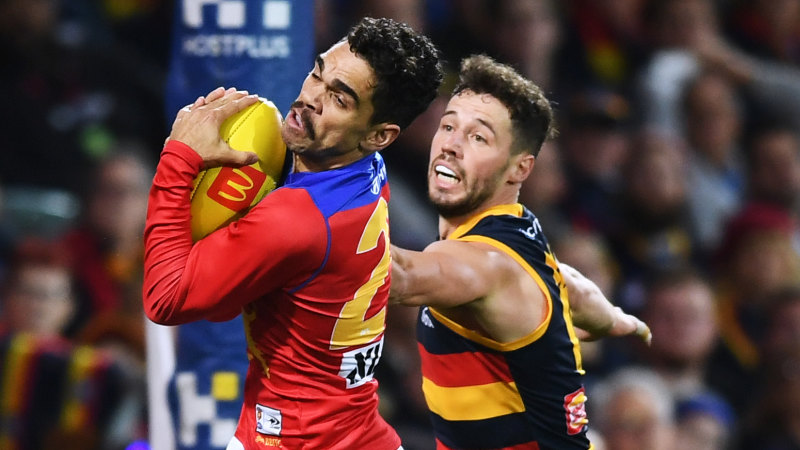 A champagne premiership quarter right from the top shelf reaffirmed Brisbane’s status as one of this year’s heavyweight flag contenders and killed off Adelaide’s designs on spruiking a massive upset.

After an indifferent second quarter, during which the Crows moved ahead by 15 points, the Lions responded emphatically with eight unanswered goals to restore natural order and remove all doubt around the verdict.

Charlie Cameron (four goals) was lethal and efficient all night lurking in attack, Lachie Neale typically industrious and Zac Bailey hurt Adelaide all night, both in the middle and inside-50. 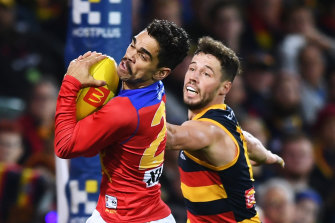 Meanwhile, the Lions’ giant forward ensemble of Jack Payne, Oscar McInerney and Eric Hipwood – playing his first game in 308 days after recovering from a knee reconstruction – stretched the Crows’ defence.

Despite losing Joe Daniher and Dan McStay to injury across the past fortnight, the competition’s most potent attack still looks super-imposing.

Adelaide, smarting following back-to-back beltings at the hands of GWS and Carlton, made seven changes at the selection table and fashioned a fine second-term rally. The exquisite skills of Jordan Dawson and Tom Doedee behind the ball and an overall lift in intensity saw the home side clog up the Lions’ exit points and begin running on top of the ground. 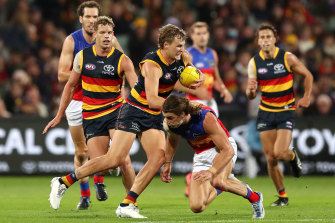 The Crows turned their early 18-point deficit into a 15-point lead, but the Lions hit back late in the half when Bailey goaled following an inopportune fumble from Jake Soligo, and Jarryd Lyons converted on a 50-metre penalty to trim Adelaide’s lead to three points at half-time.

Brisbane carried that momentum into a barnstorming third stanza, Jarrod Berry finally quelling the rampant Dawson, before Dayne Zorko, who was relatively subdued in the first half by his standards, produced two moments of characteristic brilliance.

Zorko expertly read McInerney’s hit-out and walked into goal before conjuring a beauty from the boundary line moments later.

At the other end, Adelaide’s finishing was poor and costly. Taylor Walker (1.4) and Elliott Himmelberg (0.2) were the chief offenders, particularly on set shots, as the Crows plunged to their third successive defeat.

The promise of a fast-tracked rebuild that they showed earlier in the season is suddenly going nowhere.

ECHOES OF ’79
Ned McHenry’s first goal was rather fortunate, to say the least.

The small forward gathered a ground-ball, which clearly went over the white paint right under the boundary umpire’s nose, in front of a stationary Keidean Coleman. McHenry then baulked around McInerney and snapped truly over Marcus Adams.

While the stakes were nowhere near as high, it did evoke memories for those old enough of Wayne Harmes’ famous, last-minute slide and knock-in which resulted in Ken Sheldon’s sealing goal that turned the 1979 grand final in Carlton’s favour against Collingwood.

MAC ATTACK
Adelaide’s fightback either side of quarter-time was spearheaded by two emerging sources – Shane McAdam and McHenry.

The lead marking of resurgent McAdam, who spent some time in the SANFL earlier this season, was a feature, while McHenry bounced back nicely from his poor showing against the Giants.

Jackson Hately also produced arguably his best game in Crows colours, but the Lions eventually seized control and demonstrated the difference between these two sides is still huge.