Round six of the AFLW season featured the first AFLW showdown, no score review proving costly and Carlton with some mid-season woes. Here’s what we learnt.

When a three-time premiership side, and the most successful in AFLW history, comes up against one that’s only played five previous games, a pretty uneven match-up can be expected. And Adelaide didn’t take their foot off the accelerator in their 60-point win over cross-town rivals Port Adelaide in front of 20,652 fans in the first Showdown at Adelaide Oval on Friday night. Power coach Lauren Arnell commented post game, “I think we clearly saw the triple-premiership team that the Crows are, an experienced, hardened football group against a young team … There’s plenty to learn for us, we’re disappointed we weren’t able to execute the plan we came in with, but the Crows showed they were the better side.” In keeping Port Adelaide goalless, Adelaide now haven’t conceded a single goal in two consecutive games after beating GWS by 96 points last week. Much of this is to the credit of the Crow’s defensive unit, which boasts experience and cohesion and know-how to trap the ball in their side’s attacking half and force turnovers to the game back on their terms. Three-time All-Australians Sarah Allan and Chelsea Randall and versatile Stevie-Lee Thompson have all been with the side since 2017, Marijana Rajcic hasn’t missed a game since debuting in round three 2018, and Najwa Allen was drafted in 2019. This experience also supports the youth in the line, including the likes of Chelsea Biddell, and makes it hard for teams that are newer or gone through periods of instability or adversity with injury to go up against. With eighteen clubs in the competition for the first time, there’s bound to be gaps in maturity, match-game experience and sharpness of skills, seen most acutely when a powerhouse such as Adelaide takes on a newcomer.

The result of Richmond’s four-point win over Gold Coast on Saturday could have been very different had there been a score review system in the AFLW, similar to that in the men’s competition. Late in the third quarter, Richmond’s Maddie Shevlin unloaded from outside 50 and had the kick called a goal, despite the Suns defenders being adamant it was touched before it crossed the line. But the goal umpire missed it, and as there is no score review in the AFLW, a goal was called despite all the commentators agreeing it was touched. In a short home-and-away season where every win can be influential and loss costly, and in a low-scoring game with goals hard to come by, the lack of score review technology may prove significant. The victory is Richmond’s fourth in a row and betters their best AFLW win/loss record, putting them in a good place for a maiden finals berth with four rounds to go and sitting pretty in the eight. On the other hand, the lack of four points keeps Gold Coast on the cusp of the eight, a win out of it with 3 wins, 3 losses this season. They next face Sydney, a winnable game, and then a much-tougher challenge in flag favourites Melbourne. 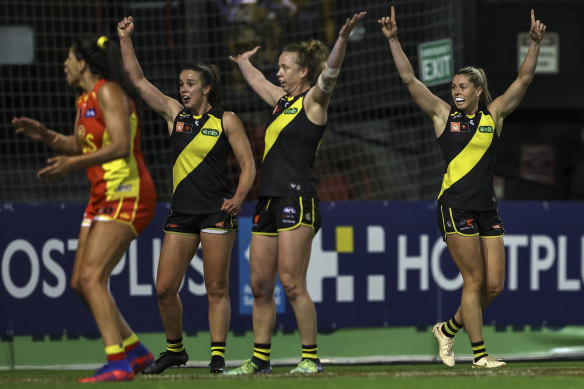 The Tigers celebrate in the close win over Gold Coast, which had a moment of controversy.Credit:Getty Images

Heading into Brisbane’s 44-point win over Essendon, Lions star onballer Ally Anderson needed 20 disposals to reach 1000 career possessions, and in reaching the milestone with a kick late in the fourth quarter, she became the first Indigenous player in the AFLW to do it. Anderson, a proud Ghungalu woman and two-time club best and fairest, has been a pivotal part of the Lions engine room since being drafted as a foundation player alongside W Award winner Emily Bates. The pair were dominant against the Bombers on Sunday afternoon, particularly in clearances with 17 between them, two more than Essendon overall. It was a comprehensive win by the Lions, who were only let down by inaccurate kicking. Five of their 14 behinds came from hitting post, three of them off the boot of forward star Greta Bodey. In getting first hands to the footy and applying strong tackling pressure in forward 50, the Bombers struggled to get control of the ball. The Lions had Kate Lutkins back, returning after an ACL injury with managed minutes, and had seven different contributors on goal, including ruck Tahlia Hickie, who finished the game with 30 hitouts. In positive news for the inexperienced Bombers, Joanna Doonan got her first AFLW goal, Cat Phillips and Steph Cain both fought hard in their 50th games, along with Maddie Prespakis, who had 20 disposals, nine tackles and three clearances. The Lions reclaim their top-of-the-ladder position with the victory and are looking in good shape with finals looming – they just might need to get some extra goalkicking practice in. The Lions’ win put them back on top of the ladder. 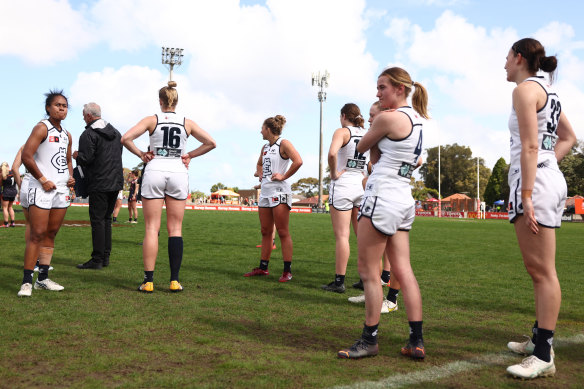 It’s proving another frustrating season for Carlton, who are stuck on just one win.Credit:Getty Images

Foundation club still got the Blues

While Greater Western Sydney redeemed themselves after losing to Adelaide last week by 96 points, with a 17-point win over Carlton on Saturday, things aren’t looking quite as good for the Blues, who went into the game as clear favourites. It hasn’t been an easy season for the Blues, who have only notched one win, a one-point victory against expansion side Essendon no less, and back-to-back draws with newcomers Port Adelaide and ladder sliders Fremantle. Their midfield has been showing a lot of promise, especially with Mimi Hill averaging 24 disposals, Abbie McKay becoming a reliable ball winner at an average of 21.2 disposals per game and Breann Moody consistently winning the hitouts. However, overall the team are struggling to keep possession of the ball and create avenues to goal. For example, against the Giants, despite winning the clearances 27 to 17, they struggled to win the ball or keep possession of it, with only four players registering more than 10 disposals, while the Giants had nine. Carlton coach Daniel Harford said he put down the loss to not being able to “move the ball”. “We dominated clearances, we dominated contested possession, all the stuff that you base your ability to get territory from [but] we became really safe and nervous with the ball,” said Harford. “We had control of the footy, we’re winning it at the source. So, we did the hard work, we just weren’t able to do the work on the outside of that, which was disappointing.” Carlton are familiar with late season surges, where they seem to kick into gear when their season is hanging in the balance and finals are unlikely but still within their grasp. Yet now with 18 clubs competing for a top-eight spot, they have a lot of work to do in the next four rounds, sitting at 14th on the ladder with a lowly 62.9 percentage. For comparison, Bombers in their first season are sitting equal with points with the Blues but have a much fatter 109.7 percentage. Carlton next face St Kilda, Richmond, Gold Coast and the Western Bulldogs. 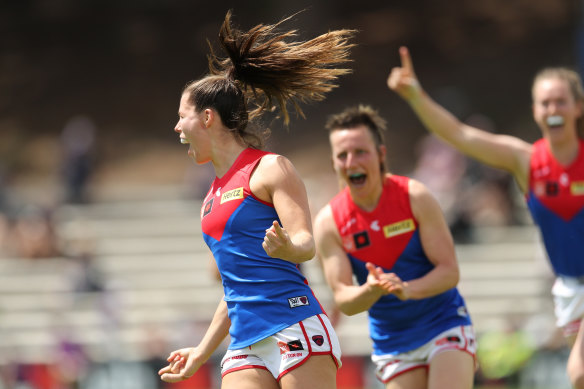 Melbourne rein over Fremantle on Sunday at Casey FieldsCredit:Will Russell/AFL Photos via Getty

One of the most intimidating things about Melbourne, especially coming into the back half of the season, is their spread of talent when it comes to contributors to the scoreboard. In their 30-point victory over Fremantle on Sunday, they had six different goalscorers, the ever-reliable Kate Hore with three to her name. A common trend emerging with the Dees is when the opposition try to shut down any of their avenues to goal, more will pop up as the depth of talent runs so deep. Against Fremantle, midfielder Sabrina Duffy and ruck Eden Zanker each got two goals, while on ballers Daisy Pearce and Olivia Purcell and key forward Tayla Harris each registered a major. With credit to Fremantle, the clash against the Dockers was a tight arm wrestle with score levelling throughout the first three quarters. It was a hard contest with Fremantle’s Kiara Bowers especially damaging with 26 disposals, six clearances and 12 tackles. But then, the Dees put their foot down and booted four answered goals in the final term to place them firmly in the top-four, alongside Brisbane, Adelaide and Collingwood. Rounding out the weekend of AFLW, North Melbourne claimed their biggest win in competition history after thrashing expansion side Sydney by 54 points at Swinburne Centre on Sunday afternoon. Pivotal was Tahlia Randall (three goals) and Jasmine Garner (two goals), while Sydney were kept goalless.