Wayne Bennett is not giving up hope on retaining Joseph Suaalii after the 17-year-old's demands of a new five-year deal with a get-out clause was knocked-back by the club.

Suaalii is already signed to the club for 2021 and is expected to make his first-grade debut on the wing next season. But promises from Rugby Australia of Olympics glory via the Rugby Seven and potential national selection has the youngster still peering over the fence. 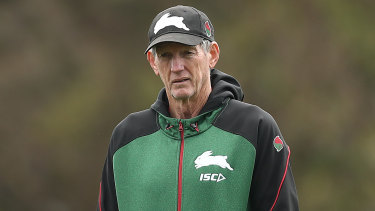 Bennett once again slammed the amount of attention and pressure put on the 17-year-old despite Suaalii having not yet played a first-grade game. The former Broncos coach said a number of players similar to the teen star came through the doors at Brisbane with little fuss made.

"I don't know where the fanfare came from," he said about Suaalii. "We [the Broncos] had a lot of top kids and we got deals done there without it necessarily being a headline every day and they were as talented as Joseph is."

In terms of his own contract, Bennett revealed he had a "quick phone call" with Queensland Rugby League chairman Bruce Hatcher about potentially taking over for Kevin Walters as Maroons coach for the 2020 Origin series.

Kevin Walter is the front runner to become head coach at the Broncos, with the responsibility of an Origin series at the same time as starting at a new club considered potentially arduous.

"I said it privately to him and I'll say it publicly to you, as long as Kevin has got the job I'm not trying to take the job off him," Bennett said. "If they make another decision from QRL and I get on the shortlist I am happy to be there."

Bennett said he could easily jump onto the role as Maroons coach straight after the 2020 season and said it would be a smart decision for the QRL to use a club coach.

"In my opinion that's been one of the biggest mistakes they've made in rep football over a long period of time you want the best players in the team and you want the best coaches available coaching and if the best coaches are available that's what you want," he said. "That [hiring a separate coach] was a path they went down a long time ago that's their decision and I don't necessarily agree with that point of view."

South Sydney have won six of their last seven games and will be looking to make the jump to 5th on the ladder with a win against the Bulldogs on Thursday night.

Earlier in the week, a number of the players said they considered themselves the "underdog" of the 2020 season with Bennett stating it was not his view.

"I'm happy with any label. We get all types of labels don't we? I'll take any of them. It may not be my opinion but that's ok," Bennett said.

Pokies, politics and a pen: Inside the dogfight for power at Canterbury

Maroon Mahoney has an eye on Origin