AFL chief executive Gillon McLachlan has told club bosses that the AFL would have little choice but to follow rugby union’s hard stance on Israel Folau’s anti-gay comments if facing a similar scenario with a player.

McLachlan told a meeting of club chief executives late on Tuesday that the AFL’s commitment to inclusion — seen in the league’s display of the LGBTI flag at their headquarters — meant that they would be compelled to take a similar line against a player making the kind of anti-gay comments that have landed Folau in a legal fight to save his Australian rugby career.

McLachlan’s comments came as he posed the question to club chief executives of whether there should be an AFL and club position on a Folau scenario and, if so, what that position should be. 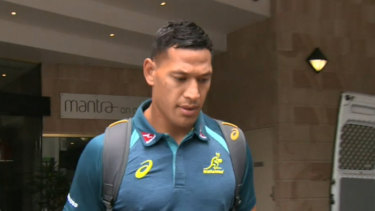 Sources said that the club CEOs more or less reached an agreement that was supportive of taking a stand against an AFL player who behaved as Folau did, the rugby league and rugby union champion who briefly played for Greater Western Sydney after crossing from the NRL.

But while the AFL boss essentially endorsed Rugby Australia’s strong stance on values grounds, there is recognition within the AFL and clubs that legal process must be followed when dealing with the relevant player, and that an issue of this kind would be difficult to navigate on a practical level.

While more or less backing Rugby Australia’s stance on Folau — the rival code has undertaken a process that could lead to the rugby superstar being sacked — McLachlan is understood to have questioned how Rugby Australia first handled the Folau issue, which arose from religion-based hard-line comments about homosexuality on social media and followed an earlier warning by Rugby Australia on comments that were considered homophobic.

In discussing a potential Folau-like scenario, the club chief executives addressed both the technical legal position — when and if a player would be in breach of his contractual obligations — and what a source described as "the practical" position that clubs would take.

The clubs specifically discussed how their respective playing groups would deal with a player making homophobic comments — and Folau’s were made on the basis of his Christian faith — and it was largely agreed that contemporary players, on the whole, would not support a player making those comments.

When Folau made his comments and Rugby Australia moved to terminate his contract, there was also a view within the AFL that a moral stand such as rugby’s must be in concert with internal legal process, and that rugby had acted in haste to say Folau would be terminated before the legal position was completely clear.

AFL, Geelong and Carlton officials spoke to Gary Ablett and Matt Kennedy respectively about those players "liking" one of Folau’s controversial posts on social media, with Ablett quickly "unliking" the tweet and subsequently explaining his position on Instagram.

Broncos player stood down after charges