Club concerns about the forced "back-ending" of contracts are likely to be raised when the AFL meets with list managers on Monday, just days out from the first list lodgment deadline and less than three weeks before the national draft.

After months of talks between the league and the AFL Players Association, the parties finally confirmed on Friday that a new collective bargaining agreement had been struck for 2021. Under the agreement, list sizes have been reduced, with clubs to have a minimum of 37 players and a maximum of 44. Total player payments have dropped by nine per cent for 2021, although current players will only lose 3.5 per cent of their pay for next year. The discrepancy between those two figures is a result of reduced wages for incoming draftees, the chopping of list sizes, and provisions for the back-ending of contracts. 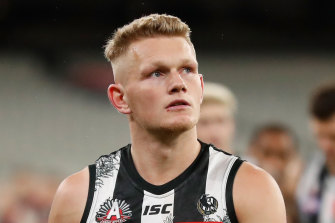 It is that final consideration that industry sources have indicated is an area of concern for clubs. As reported last week, players who had a pre-existing (pre-AFL shutdown this year) contract for 2021 and beyond will take heavier cuts next year and have their contracts back-ended to receive more in 2022 and 2023 so that they ultimately lose only 3.5 per cent. It is up to clubs to reassign the money of these players to ensure they remain compliant with the salary cap next year and beyond.

This has created an extra set of headaches for clubs, who have delicate salary cap considerations to consider. Whether they choose to push a larger sum of a player's money into the 2022 or 2023 cap can have a considerable effect on their capacity to trade that season. The recent and stark example of Collingwood's issues with back-ended contracts – most notably that of Adam Treloar, which shaped the Magpies' decision to trade the midfielder – highlighted the potential issues of such deals.

The league will hold virtual question and answer sessions with list managers from the 18 clubs on Monday – held in three groups of six – in a bid to clarify details of the revised CBA, with the back-ending issue likely to be raised, according to sources. The new CBA only locks in 2021, although the league and union have committed to working together on a new agreement for 2022 to 2024. The AFL and AFLPA have also agreed to provisions whereby the player payment pool for 2021 could fall or rise depending on whether industry revenue exceeds or falls well short of expectations.

While not universal, club sources have indicated a degree of frustration with recent decisions from the AFL, in particular the manner in which the rule changes for 2021 were rolled out. Clubs felt they had not been consulted enough, if at all, beforehand, although league chief Gillon McLachlan on Friday defended the manner in which the AFL handled the situation.

While the league announced three rule changes for the AFL in 2021 – two involving the man on the mark and a reduction in interchange rotations from 90 to 75 – all made in a bid to encourage attacking play, it has also emerged that the AFL competition committee last week discussed the prospect of scoring incentives such as bonus premiership points for hitting in-game scoring targets. However sources indicated that the idea gained little traction, with the prevailing view being that it would be too difficult to implement the concept and retain a sense of equity.

A host of fringe players around the league remain in limbo ahead of Wednesday's list lodgment deadline. Delisted free agents can be signed from Thursday, while the national draft will be held on the night of December 9, with the pre-season and rookie drafts to follow the next day.

Why does the gender wage gap still exist?