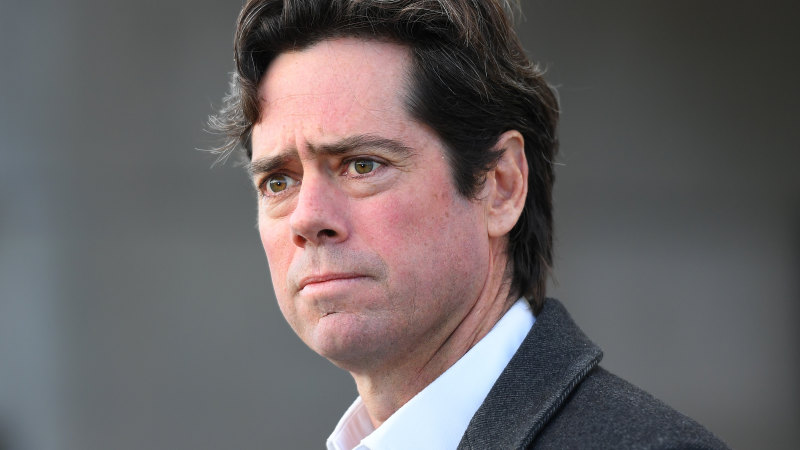 There was a neat piece of symmetry in the timing of the allegations of the AFL’s toxic culture that have hit Gillon McLachlan between the eyes over the past 48 hours.

The man who has overseen Australia’s largest sporting body over the past seven years has been targeted with the worst of his legacy while doing what he does best as another COVID-19 outbreak has again threatened to interrupt another football season.

McLachlan has been clearly rattled by accusations that the AFL has in the past paid hush money to disgruntled and damaged former employees. He has denied these claims, as he focuses upon a chess game of moves with state governments, stadium operators, broadcast partners and clubs as he moved to retain the pandemic-affected Sir Doug Nicholls round. 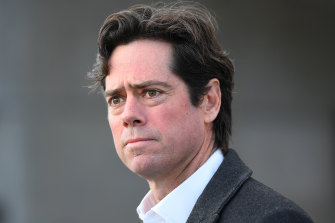 Allegations revealed by The Australian, involving 14 former employees over nine years, followed the release of Michael Warner’s The Boys’ Club, which focused upon the unpleasant underbelly of the AFL’s historic take-no-prisoners/win-at-all-costs deal-making.

It is true that McLachlan has attempted – albeit unsuccessfully – to fix key elements of that culture.

Intriguingly the News Corporation story quotes Dorothy Hisgrove, one of a series of McLachlan’s and his predecessor Andrew Demetriou’s unsuccessful female executive appointments, who had to be removed from her people and culture role due to a series of relationship breakdowns while McLachlan attempted to champion her cause.

Not only were key AFL figures scornful of Hisgrove highlighting problems with the non-disclosure agreements she oversaw, but also of Hawthorn president Jeff Kennett’s attempts to champion the victims given his leadership style.

Hisgrove was a divisive figure at the AFL but unlike so many equally divisive male executives before and after her she was not tolerated for long. She won the job ahead of the popular former senior policewoman Sue Clark, who returned somewhat disenchanted to a senior VicPol position. Too many women have left the AFL feeling undervalued or mistreated and Clark was one victim of former senior executive Andrew Catterall, confirming to The Age six years ago that he once threw a file at her head during a meeting. Catterall denied this at the time.

While there is no denying McLachlan’s feminine side there is equally no doubt that he is a man’s man. As he took on the top AFL job replacing Demetriou in 2014 his keynote farewell speech delivered at Demetriou’s tribute dinner more resembled a celebrity roast, as did his tribute to outgoing AFL Chairman Mike Fitzpatrick several years later.

Distraught three years later at having to remove two of his executives – one a close friend – after their workplace extra-marital affairs were made public, McLachlan later summoned both men and the male members of his executive to an intimate dinner seeking closure. In true AFL style, both men had employment again within months.

The men in the AFL’s inner sanctum called this great leadership. Some women at the game’s head office wondered then and still now why other inappropriate workplace relationships were not similarly acted upon.

McLachlan’s supporters point to the fact that his key legacy, apart from a series of record broadcast-rights negotiations and government and stadium deals that remain by far the richest in Australian sport, is the creation of a national women’s league. While the game has failed to promote enough good women around that competition McLachlan fast-tracked its inception.

But it is an indictment that the one-time men’s-only MCC has moved streets ahead of the AFL in terms of a culture of employing women and has championed a number of former AFL women employees – two in middle management who had issues with the AFL’s integrity and media departments respectively. Every revenue generation department under CEO Stuart Fox is overseen by women.

McLachlan said the AFL had never in his time attempted to silence an employee via a non-disclosure agreement. His supporters point to the AFL’s generous redundancy policy, which operates separately to allegations of harassment and bullying.

And it is true that McLachlan’s response to bullying claims has been an improvement. But while it was his intervention while Demetriou was on sabbatical in 2012 that ultimately led to the removal of Catterall, the handling of that long-running issue continues to also haunt McLachlan and his legacy. Just as he haunts Demetriou and those staff members who found his workplace behaviour so intolerable that his physical presence back at AFL headquarters either unsettled or angered them.

Not only did Demetriou give Catterall a glowing reference around the time the latter left Racing Victoria but welcomed him to both his industry farewell and another intimate dinner hosted by McLachlan. And then head office under McLachlan rented the AFL’s Mike Sheahan Media room to the Catterall-led Racing.com, meaning staff still bruised by his treatment had to deal with his physical presence all over again.

Like Essendon and their failure to take responsibility for the drugs and injecting regime, like Adelaide and the denials over their pre-season camp after the 2017 grand final and like the AFL itself, which repeatedly failed to act on Melbourne’s blatant tanking regime – the ultimate reckoning for both the AFL and Catterall proved so much more damaging to both parties.

And it seems an extraordinary failure of communication that neither McLachlan nor his legal counsel Andrew Dillon ever told Catterall about the $200,000 settlement paid to a former male staffer who remained traumatised after working under the former executive long after he left.

Ultimately though, responsibility lies with the AFL’s board of commissioners who have championed women directors but rarely welcomed those women into their true inner sanctum.