Melbourne is obsessed with whether or not the grand final will be played at the MCG. It won't be. The real question is where it will be played. Brisbane, Perth, Adelaide and Sydney all have made claims.

Queensland has given the AFL refuge. That gives Brisbane the high moral ground. But it doesn't win the argument outright. Off-shoring has worked for Queensland as well as for the AFL, financially and in terms of prestige. It's been good business for both parties, but there was no wink and nudge. 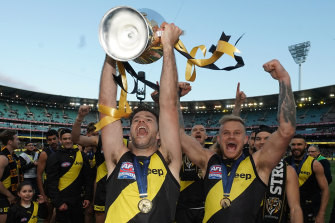 The question is no longer if the grand final will be held in Melbourne. Credit:Scott Barbour

Perth and Adelaide are both footy cities, with 50,000-capacity footy grounds. You only had to tune into the games at Optus Stadium and the Adelaide Oval on the weekend to remember what a difference even a portion of a real footy crowd can make.

Sydney's in the running because when it comes to putting one over Melbourne, Sydney's always in the running. It has a ground, and sometimes weeds it.

Since no one city has overpowering claims, why not give it to the team with the greatest claim? Why not award the grand final to the highest-ranked of the two grand finalists, or the minor premier?

If this confers an advantage, is it not merely the advantage Victorian clubs always have enjoyed in reverse? Optus Stadium and Adelaide Oval made West Coast and Port Adelaide even more confronting for opponents on the weekend.

Do you think it was any different at the MCG in each of the last eight grand finals when non-Victorian teams took on Melbourne opposition?

The beauty in this solution is that as things stand, Brisbane, Perth, Adelaide and Sydney are all home to teams that could finish on top. If a Victorian team was to emerge in first place, it could take its choice of grand final venue. Everyone has a ticket in the raffle.

The upfront argument against it will be that it is not practical. In a normal year, the MCG prepares for the grand final for weeks. But this is not a normal year.

Once, it was beyond the AFL's wherewithal to move even a single game. It was the corporates, you see. This year, it has moved the whole competition, again and again, shape-shifting endlessly. The buzzword is "agile".

This season as never before, necessity has been the mother of invention. The entire league is a guinea pig. The AFL has experimented so freely it might yet accidentally stumble on a vaccine for COVID-19.

Sydney's in the running because when it comes to putting one over Melbourne, Sydney's always in the running. It has a ground, and sometimes weeds it.

Some of the modifications may stay with us – shorter quarters, for instance.

And some variations will be once-offs. The grand final is one. A contract guarantees that for decades hence, it will be at the MCG. Pandemic permitting, tradition and rites will be restored, Melbourne's dignity, too, for those who somehow think this is more a sovereign issue than a footy matter.

What has been established for sure this weird season, what the network executives have long known: AFL is like every other sport a TV game.For fans, it hasn't much mattered where a game was on, only that it was on.

In that context, it doesn't really matter where the grand final is played. But with political, historical and technical considerations out of the way, it makes sense to go with a footy answer.

I didn't come down in the last shower (which is right now everywhere AFL footy is being played). I know it will come down not to the top rung, but the bottom line.

If so, is it too much to ask for somewhere where it won't rain?

More Betts: Popular Blue to kick on at Carlton in 2021