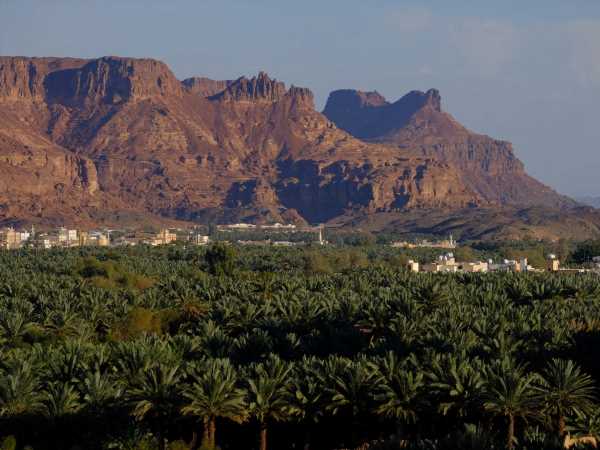 merge from your tent into an Arabian dawn and you may feel you are still dreaming.

Look up to a clear sky that ripples from deep blue overhead to sapphire sharp at the horizon. Hollywood-perfect mountains encircle the camp, with corrugations that reflect a dazzle of red and gold from a young sun.

The dramatic desert landscape is bathed by a gentle breeze, adding to the sense of timelessness – a scene unchanged for millennia.

This camp, outside the city of AlUla, lies astride an ancient trade route. Yet the area is firmly part of 21st-century Saudi Arabia. And this week the future is set to meet the past here.

Extreme E, the hard-core challenge for electric SUVs, is being launched here in the northwestern desert of Saudi Arabia. Yet while the high-energy race takes centre stage, the backdrop will surely also grab the world’s attention. 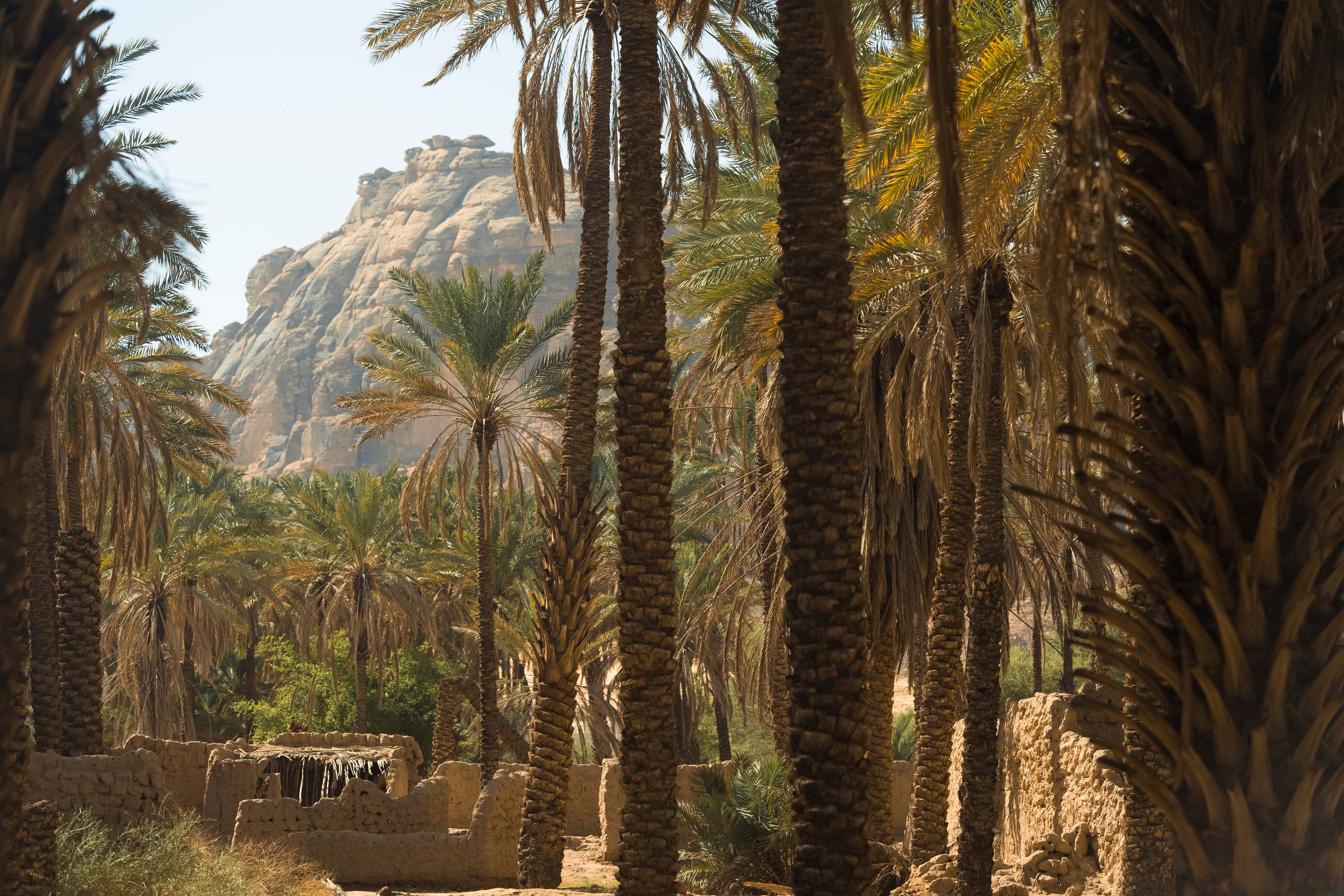 Nature has sculpted a magnificent setting from the desert rocks. Curves and crags rise high above the rippling sands, creating a constantly changing shadow drama as the sun moves across the wide Arabian sky.

AlUla has traditionally welcomed pilgrims making the Hajj to the holy city of Mecca, but mainstream tourism is a more recent development. The kingdom first tentatively allowed British tourists only a couple of decades ago. At the time, women under 40 were required to travel with either a husband or a brother.

Curves and crags rise high above the rippling sands, creating a constantly changing shadow drama as the sun moves across the wide Arabian sky

One of the longest-standing frontiers in travel has now melted away, with the biggest country in the Middle East issuing online visas. I have so far visited twice, in both 2019 and 2020. And the stand-out location is AlUla and its surroundings, deftly curated for a deeper understanding of the region and its rewards.

At the heart of the matter is AlUla itself, which provides a welcome splash of green in a land of dust. Amid soaring sandstone cliffs, it is an oasis brimming with palm trees. 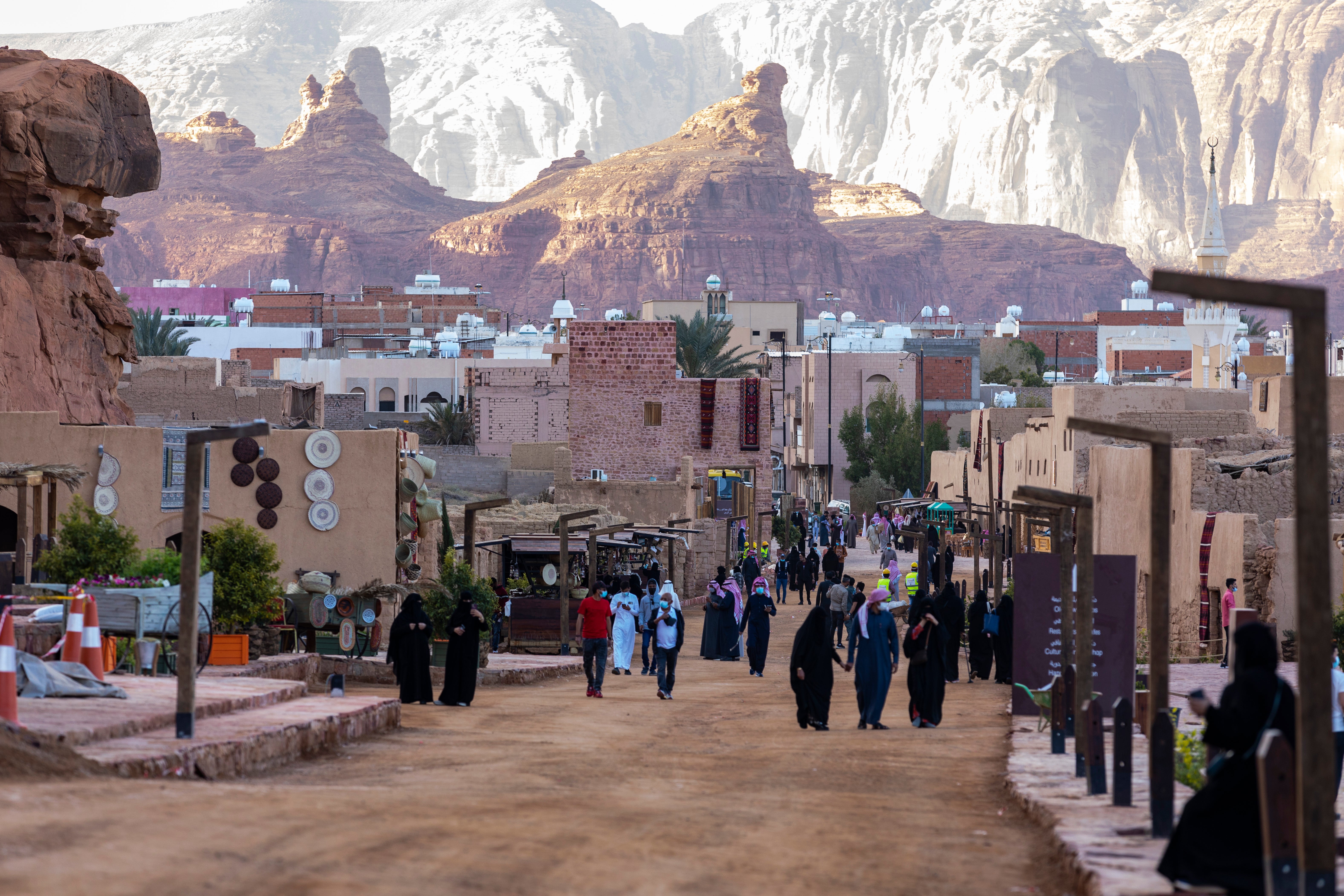 Fresh water has attracted humanity here for millennia. Bronze age tombs found in the area were constructed 2,500 years ago. One thousand years later, the first city walls were built as AlUla became an important staging post on the incense trade route across Arabia.

Six centuries on, and the great trading people, the Nabataeans, had cornered the market in the heavenly substance. They dominated northern and western Arabia, and used some of their considerable surplus wealth to create the spectacular stone city of Petra in Jordan. The same concept – carving astonishingly ornate facades in bare rock – is emulated at Hegra, 15 miles north of AlUla itself.

It was their principal southern city, and the 111 extravagant carvings are well preserved. For me, they are even more powerful than Petra because of their silent, lonely desert location and the absence – so far – of fellow tourists. Extraordinarily, it is still possible in the 21st century to have one of the world’s leading archaeological sites to yourself and your guide. 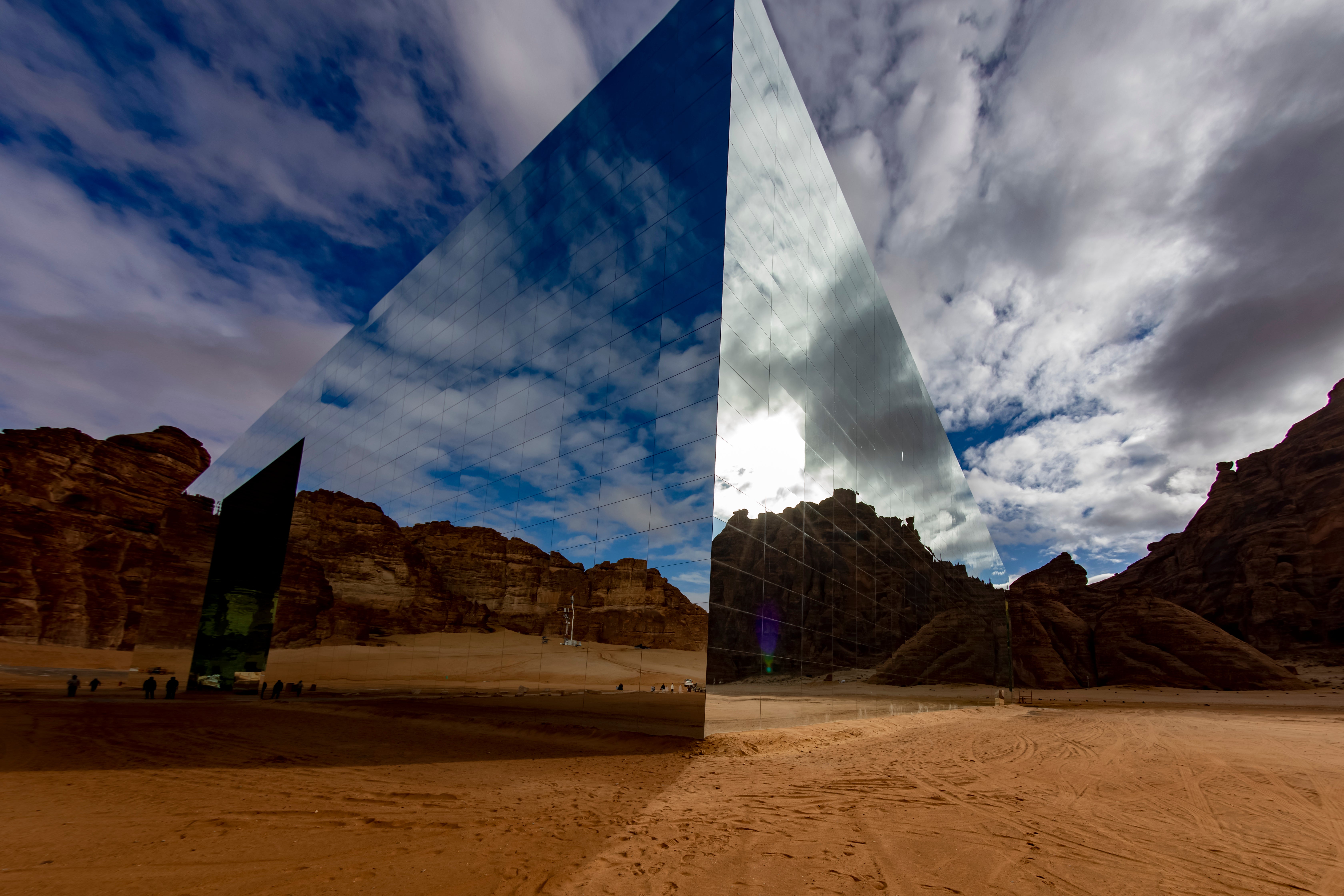 Close by is the Hejaz Railway, an amazing early 20th-century venture intended to connect Damascus in Syria with Medina. Engineers and labourers toiled for years to create a route through the Arabian desert.

The line has long been reclaimed by the sands, but on the roads to and from AlUla, you catch glimpses of the old stations and the trajectory of the tracks. And the station at Hegra has been preserved as a testament to heroic failure.

Turn a corner in the sandy track from the main highway, and you are confronted by a vast mirrored cube

Dazzled? If you have not been so far, you will when you visit Maraya: a multi-purpose conference and entertainment venue that has brought brilliance to the desert.

Turn a corner in the sandy track from the main highway, and you are confronted by a vast mirrored cube, which is at the heart of the vision for the AlUla area. Inside, you find halls devoted to culture – and a roof terrace dedicated to gentle indulgence. It has already hosted prestigious events such as the recent GCC Summit and the Nobel Laureate prize, and is set to become one of the most sought-after venues in the region when events are back in vogue. 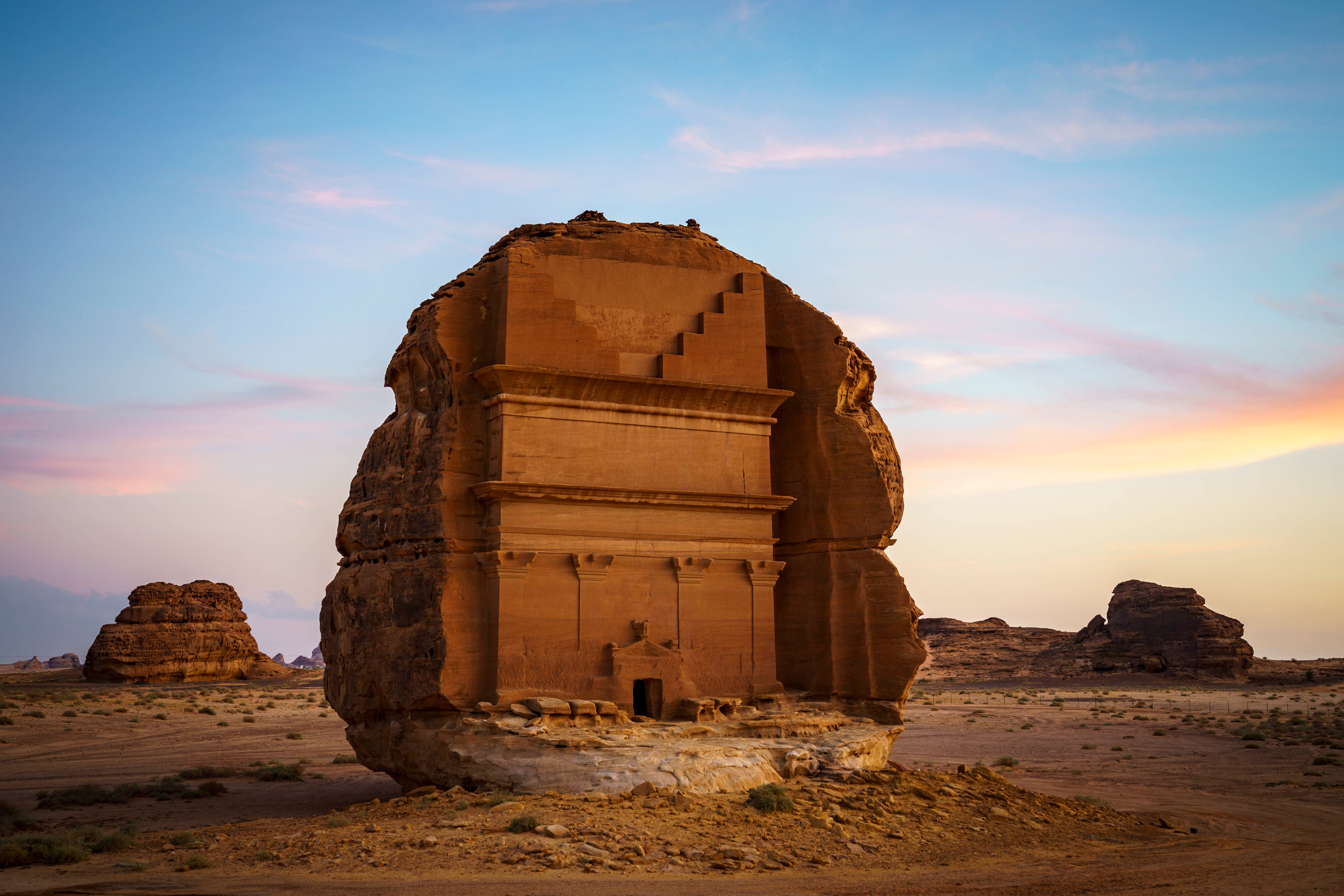 Hegra is an ancient city

Year-round tourism has just arrived in AlUla, with the reopening of four key heritage sites to visitors, including the recently restored Old Town.

For the past three years, the 12th-century collection of 900 mudbrick and stone buildings has been carefully conserved and restored by the Royal Commission for AlUla. It includes the Tantora Sundial, the ancient guide to the seasons, which gives the festival its name. Two mosques have been restored along with many dwellings, and the citadel provides an outstanding view of the wider city.

In parallel, the “Incense Road” adjacent to the Old Town is now a hub for shopping, eating and entertainment. It leads to the more modern part of AlUla, a sleepy settlement by day that becomes exuberant in the cool of the evening – and whose inhabitants are generous and welcoming. 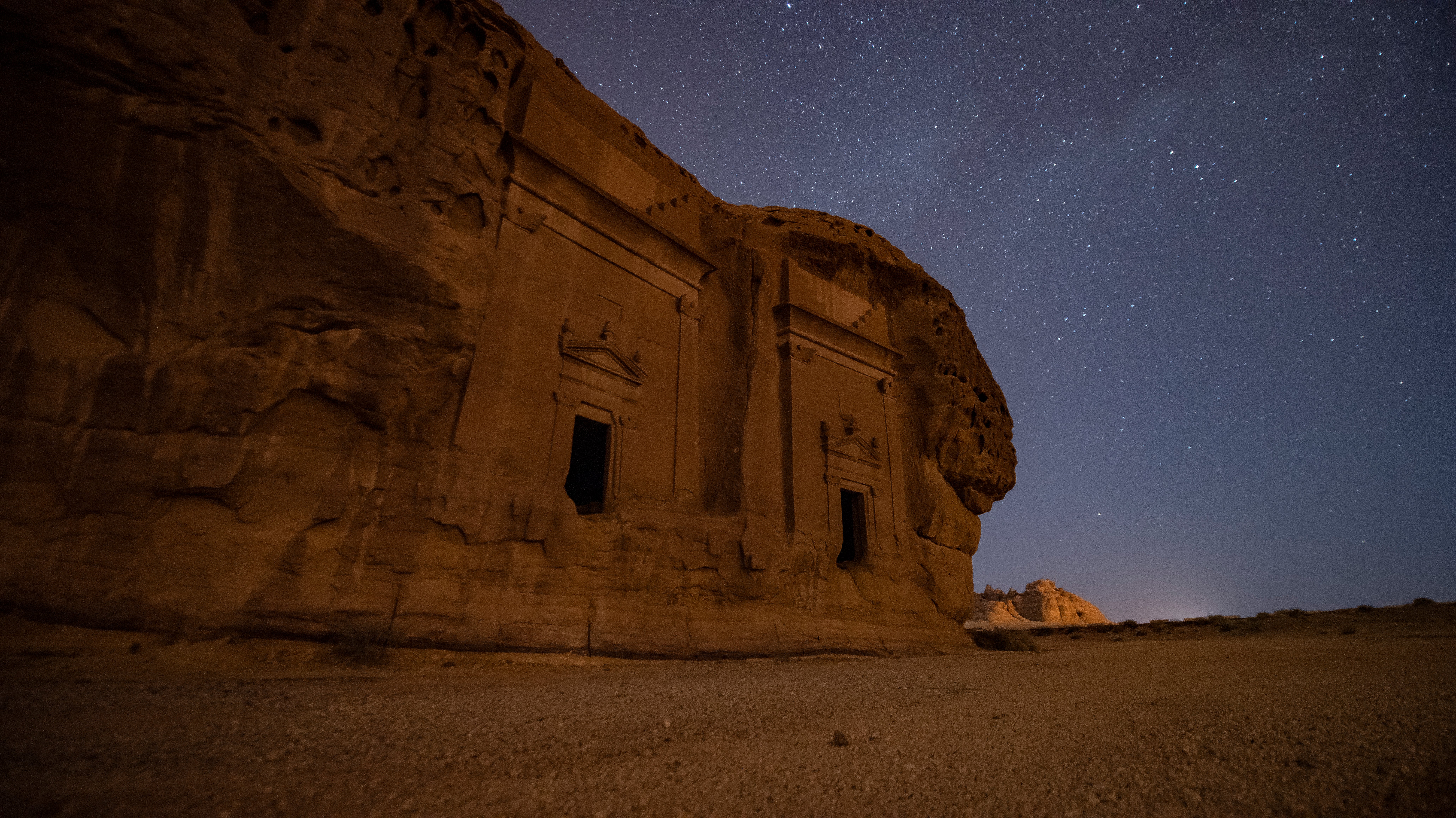 The 111 extravagant carvings of Hegra are well preserved

As with any destination, you will need to make your own assessment about whether to visit Saudi Arabia. My view is that tourism can be a force for good in breaking down barriers and opening up the world – and, right now, you can enjoy the rare gift of experiencing a nation in transition.

If you decide to travel to the kingdom then AlUla, created by nature and embellished by man, is a superb place to start.

In normal times the easiest approach is by air to Jeddah. British Airways and Saudia usually fly from London Heathrow, while Saudia also connects Manchester with Jeddah.

From Jeddah airport’s own railway station, high-speed trains run to Medina, which has a bus link with AlUla – or you can rent a car.

There is a small airport southeast of AlUla with connections to Riyadh, the Saudi capital.

Alternatively, Aqaba in Jordan provides a gateway, with the land frontier to Saudi Arabia close by. The border city of Haql has buses to Tabuk, from where you can rent a car or take another bus to Saudi Arabia.

The Saudi eVisa is normally easy to source at visa.visitsaudi.com. It is a one-year, multiple-entry visa which allows tourists to spend up to 90 days in the country. The application process is straightforward.

At present, though, the authorities say: “Arrival into Saudi Arabia on an international tourism e-visa is currently suspended, due to travel restrictions resulting from the Covid-19 pandemic.”

International leisure travel is not permitted from the UK at present.

Staying and eating there

The most spectacular accommodation location is Ashar Resort, which offers luxury villas and suites that blend into the stunning desert valley. The resort will soon transition into a Banyan Tree Resort managed by Accor.

Other options are listed on the Experience AlUla website.

Eating out, as elsewhere in Saudi Arabia, is excellent value and high quality.

The experiencealula.com site has loads of information and a downloadable Official Visitor Guide.

The Visit Saudi website contains plenty of information about the rest of the country.