Barcelona: Daniel Ricciardo is adamant he and combative new Renault teammate Esteban Ocon must work together to propel the team forward on the Formula One grid.

Ricciardo and Ocon had a public spat at the 2017 Hungarian Grand Prix, where the Australian felt his Force India rival repeatedly and needlessly blocked him on track during a practice session, Ricciardo saying "I don’t like his attitude" while complaining that Ocon was "always in the way". 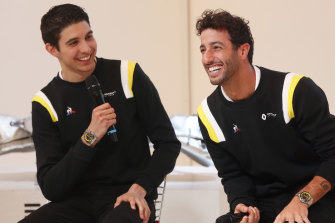 "We've got to be smart and help each other out and bring the team forwards together. I've got no intentions to do anything other than that."

Ocon spent the 2019 F1 season on the sidelines as Mercedes' test driver after competing for the Force India team in 2017-18. The Frenchman was set to drive for Renault last season before the team made a bold play to lure Ricciardo from Red Bull Racing, where the Australian had won seven grands prix over five seasons.

Renault's plans to pair Ocon with Nico Hulkenberg for 2019 were scrapped after the shock poaching of Ricciardo, with the Frenchman finding work as a test and simulator driver as part of his ties to Mercedes' young driver program. Hulkenberg was then dumped for Ocon after being soundly beaten by Ricciardo last season.

Ocon, with 22-year-olds Verstappen and Charles Leclerc (Ferrari), are seen as the brightest young talents of the up-and-coming generation of drivers, and he will be desperate to impress. At 30, Ricciardo is wary of being paired with a younger hungry teammate, but knows his on-track performances early in the season can help him set out his stall as Renault's team leader.

"I had a bit of a taste at Red Bull when Max came in as the hot new property and me being the established guy, so it's not new to me," Ricciardo says.

Ocon feels being paired with Ricciardo will provide instant feedback on how much his year off the grid developed him as a driver.

"He's a guy who has won races and has had pole positions, so it's a good chance for me to see how much I've got inside," Ocon said.

"In Formula One you always want to race against the best, and I have one of the best in my team. I'm trying to see what he's doing and to get as close to him as I can to see how I can improve. See how he's doing things, because he is a reference for me."

Any potential rivalry between the Renault drivers will play out against a backdrop of Ricciardo being out of contract at the end of 2020, with Ocon's deal tying him to the French team until the end of next season.

Earlier this week, Renault special adviser and four-time F1 world champion Alain Prost told The Age that securing Ricciardo’s signature beyond this season would require a leap of faith from the Australian, with Renault aiming to close the chasm in performance between them and the Mercedes-Ferrari-Red Bull triumvirate that has won all 121 grands prix contested over the past six seasons.