Max Verstappen and Lance Stroll collided in an eventful second practice for the first Portuguese Grand Prix in 24 years on Friday while Valtteri Bottas set the pace for Formula One champions Mercedes.

The afternoon saw two red flag interruptions, first when AlphaTauri's Pierre Gasly pulled over with his car in flames and then when Red Bull's Verstappen and Racing Point's Stroll smashed into each other. 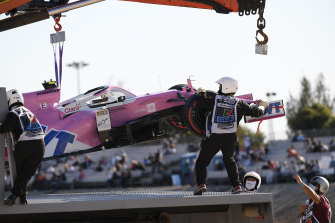 There was plenty of swearing from Verstappen over the team radio after the collision – a rarity in practice when nothing is at stake – as he tried to go through on the inside, including suggesting Stroll was blind.

"I was so surprised that he just turned in while I was coming up to him. I don't know where I had to go," said the Dutchman, who refused to apologise for his language.

"It was just very unnecessary."

Both drivers were summoned to stewards, who took no further action. 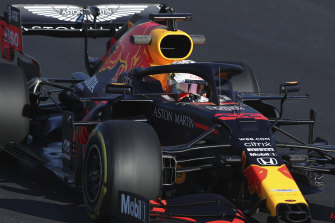 Max Verstappen was not happy after a crash with Lance Stroll.Credit:AP

"The drivers agreed in the hearing that the incident was the result of a misunderstanding between them and that with hindsight both could have contributed to avoid the incident," said stewards in a statement.

Verstappen still ended the day second fastest, half a second slower than Bottas, with Mercedes' six-time Formula One world champion Lewis Hamilton second in the morning and then eighth after lunch.

"The undulations are incredible and there's a lot of places where you just can't see where you're going," said Hamilton of an Algarve circuit making its F1 debut.

"So very challenging and the surface is very smooth and you see a lot of people making mistakes and sliding and spinning. So it's not been an easy day … today's been difficult."

McLaren's Lando Norris was third in the afternoon, ahead of Ferrari's Charles Leclerc, who had the latest Ferrari update on his car.

Bottas was quickest in both morning and afternoon, continuing a habit of leading the way on Fridays, with an overall best time of one minute 17.940 seconds around the track near Portimao. Australian Daniel Ricciardo was 13th in the second session for Renault, with a time of 1:19.987.

For the eighth race in a row, including the Nurburgring where practice started only on Saturday due to bad weather, Bottas' name was on top of the opening timesheets.

"The sun is shining, nice track, good driving. It could be worse," said the Finn.

"It reminded me a lot of when we first went to Sochi, or Austin, for the first time with the new Tarmac and it is evolving quite a bit lap by lap.

"With red flags in the second practice there was not that much running so still expecting quite a big increase in the grip for tomorrow."

Bottas has yet to translate his Friday prowess into corresponding Sunday success, with the Finn 69 points adrift of Hamilton after 11 races.

Hamilton has seven wins to Bottas's two and will be chasing a record 92nd career win on Sunday, having matched Michael Schumacher’s all-time milestone at the Nurburgring on October 11.

The last Portuguese Grand Prix was held at Estoril, near Lisbon, in September 1996 – when Williams, now last in the championship and without a point, were dominant and won the race one-two with Canadian Jacques Villeneuve and Damon Hill.