Helmut Marko, adviser to the Red Bull Formula One team, has cast apparent doubt on Lewis Hamilton’s claims that his “sore neck” was getting worse following his crash with Max Verstappen.

After crediting his roll hoop and halo device with saving his life at the Italian Grand Prix, Hamilton said on Sunday he would need to see a specialist over a potential injury to his neck. “My neck is getting tighter and tighter,” he added. 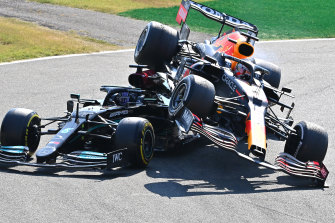 However, Marko has suggested that Mercedes had deliberately made more of the incident. “It was a normal racing accident, all the stories around it were pulled by Mercedes by the hair,” he told the Austrian daily newspaper Osterreich. “Verstappen had already got out when Hamilton tried to go back to get out of the gravel. The medical car saw that and drove on. And then a show is put on that poor Hamilton is suddenly injured, etc.”

A source at Red Bull Racing told the Telegraph that Marko’s comments were a personal opinion rather than on behalf of the team, but his outburst comes amid increasingly tense relations between the F1 rivals.

Less than two months after their high-speed coming together at Silverstone, which put Verstappen in hospital but did not result in serious injury, it was Hamilton who was thanking his lucky stars at Monza.

Fighting for position at the first chicane on lap 27, midway through the race, the two drivers bumped wheels, lifting Verstappen’s Red Bull up into the air and bringing it down on top of Hamilton’s head as both cars slid into the gravel trap.

Hamilton’s roll hoop and halo device bore the brunt of the weight, but it left him shaken, his Mercedes badly damaged and both men nursing grievances. Verstappen insisted that Hamilton had left him “no room,” launching an expletive-laden tirade over his team radio.

Mercedes argued Verstappen’s driving had amounted to a “tactical foul,” team principal Toto Wolff suggesting the Dutchman knew that if he allowed Hamilton to stay ahead he might lose the championship lead and therefore he preferred not to yield. After conducting a post-race investigation, the stewards sided with Hamilton, handing Verstappen a three-place grid penalty at the next grand prix in Russia for being “predominantly to blame” for the collision.