St Petersburg, Florida: Team Penske's hot start to the motor sports season has continued with a Josef Newgarden victory in the IndyCar season opener – the fourth win for a Penske car in seven days spanning three different series – and third place for Australian Will Power.

Newgarden crossed the finish line on the downtown streets of St Petersburg at almost the exact same time Ryan Blaney, another Penske driver, led the field to green in the NASCAR race at Phoenix. 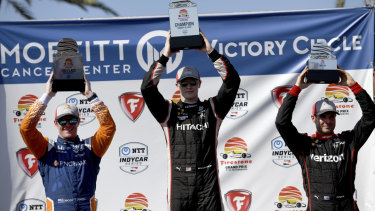 They are off to such a strong start that team owner Roger Penske acknowledged his three-driver IndyCar line-up arrived at the opening race feeling pressure to match their counterparts.

Power and Newgarden delivered in qualifying by sweeping the front row, then the American ace used tyre strategy to put his Chevrolet out front.

"So proud of our group, we have the best of the best working for Team Penske," Newgarden said. 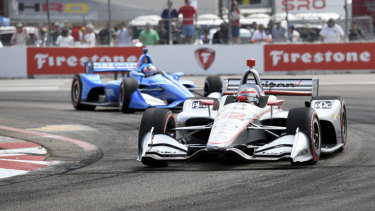 Will Power in action during the season-opening IndyCar race.Credit:AP

"There's a lot of pressure at Team Penske, everybody is rising up, and we joined the group today."

It was the 204th victory in IndyCar for a Penske driver.

New Zealand's defending series champion Scott Dixon finished second in a Honda for Chip Ganassi Racing but was stymied by lapped traffic in his bid to catch Newgarden.

"You know the lapped traffic is trying to stay on the lead lap," Dixon said.

"I thought we had a run on Josef, but once we caught the traffic it wasn't enough."

Swede Felix Rosenqvist was the breakout star of the race by finishing fourth in his IndyCar debut.

The race was slowed by only two cautions, the fewest in the 16-year history of the race.

The second stop on the IndyCar calendar is the Circuit of the Americas in Austin on March 24.