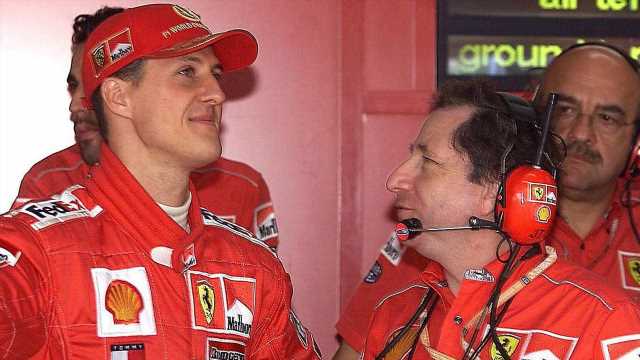 “Him, Corinna, the family — we’ve had so many experiences together.

“The beauty of what we have experienced is part of us and it goes on.”

Schumacher and Todt celebrated often during their time together at Ferrari.Source:AP

Todt was grilled about Schumacher after mentioning the German by name when asked what he will get up to after finishing his tenure as president of the FIA, the governing body behind F1.

“I have plenty of commitments,” Todt said.

“Road safety for the UN, president of Aung San Suu Kyi’s foundation, and then the International Peace Institute.

“I’m on the boards of banks, cinemas and hotels. And I am proud to have created the Brain and Spinal Cord Research Institute, to which Michael Schumacher contributed.”

Schumacher and Todt formed a vital partnership that saw the German driver win seven world championships over the course of ten years with Ferrari.

The seven championships remained a stand-alone record until Mercedes’ Lewis Hamilton equalled the feat in 2020.

Hamilton has won the drivers’ championship every season since 2014, with the exception of 2016 when he lost out to then-teammate Nico Rosberg.

There has been very little information about Schumacher’s health condition ever since a tragic skiing accident in 2013.

Last year renowned neurosurgeon Erich Riederer said Schumacher was in a “vegetative state”, and that has been one piece from a very narrow stream of information that has emerged about the state of the German.

The main reason for the mystery surrounding Schumacher’s state is his wife, Corinna.

She has barely spoken to the media about the seven-time champion and has been determined to keep his health battle out of the public eye.

In a rare public statement from Corinna and the couple’s children, Gina and Mick, around the time of the driver’s 50th birthday, the family said it was following Schumacher’s wishes to maintain his privacy.

“You can be sure that he is in the very best of hands and that we are doing everything humanly possible to help him,” the statement said.

“Please understand if we are following Michael’s wishes and keeping such a sensitive subject as health, as it has always been, in privacy.”

Corinna has been caring for Schumacher in Switzerland as he continues his lengthy rehabilitation, remaining by his side throughout the terrible ordeal.