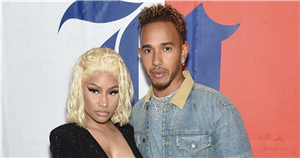 Lewis Hamilton is showing no signs of slowing down after clinching a joint-record seventh F1 World Championship back in November.

The 36-year-old is not only the most successful Formula Driver of all time alongside Michael Schumacher, but he has also branched out into music, acting, fashion and restauranteering.

Given his busy schedule, it is no surprise that Hamilton has not settled down with a family, despite stating back in 2018 that he intends to have children.

Daily Star Sport has now taken a look at eight different love interests that Sir Lewis has been linked with since he burst onto the sporting scene in his early 20s back in 2008.

In what was his most serious relationship, Hamilton was seen with singer and television personality Nicole Scherzinger between 2007 and 2015.

Best known as the lead singer of the Pussycat Dolls, Scherzinger, 42, also spent time as a judge on The X Factor UK between 2012 and 2017.

Hamilton hinted at their relationship in 2019 by saying: "It's similar to most sportsmen and women.

"It may be slightly different in that we are travelling as much as we are, and you are just away for crazy amounts of time.”

Hamilton was romantically linked to glamour model and television personality Danielle Lloyd during his time as a teenage driver way back in 2002.

The pair are said to have enjoyed a six-month fling, of which Lloyd spoke in 2007.

She said: "We were both out with friends, but there was a bit of a spark and we swapped numbers.”

Before adding: "He's a special person, but there's no more romance."

Hamilton and Rihanna have been pictured together on several occasions across their many years of friendship.

While a romantic link has never been confirmed, Lewis was forced to address rumours back in 2015.

"We've been friends for a while. We get to hang out every now and again…"

Singer, songwriter and actress was linked to Hamilton after supporting him at the Abu Dhabi Grand Prix back in 2016, a race in which he surrendered his Formula One world crown to Nico Rosberg.

That came after the pair were spotted on holiday together by The Sun.

Hamilton said of his relationship status around the time: “My love life is non-existent.

“I’m a workaholic. I simply don’t have time for it.”

Hamilton was linked with Canadian fashion model Winnie Harlow after they were spotted together at the GQ Awards in September of 2016 in London.

Harlow was thrust into the limelight after being picked for America's Next Top Model by Tyra Banks, and she was even picked to wave the chequered flag at the Canadian Grand Prix back in 2018.

That event didn’t go as smoothy as it should of, with Winnie incorrectly instructed to wave the flag a lap earlier than it should have been.

Sofia Richie is an social media personality and model, as well as the youngest daughter of singer Lionel Richie.

The 22-year-old, who started dating Scott Disick in May of 2017, was said to be seeing Hamilton earlier that year.

Sofia was spotted to have liked a topless snap of Lewis on Instagram in that period, which he had captioned: "Goodnight from Melbourne."

Hamilton was rumoured to be seeing American rapper and singer Nicki Minaj after they attended New York Fashion Week together.

In what fans assumed to be about Hamilton, she told Ellen DeGeneres in 2018: “Well, there was a new boy but he and I kind of fell back a little bit. And then…”

“And then there’s a newer… yeah, fairly new. He’s been around for a couple wigss. But I don’t have a boy.”