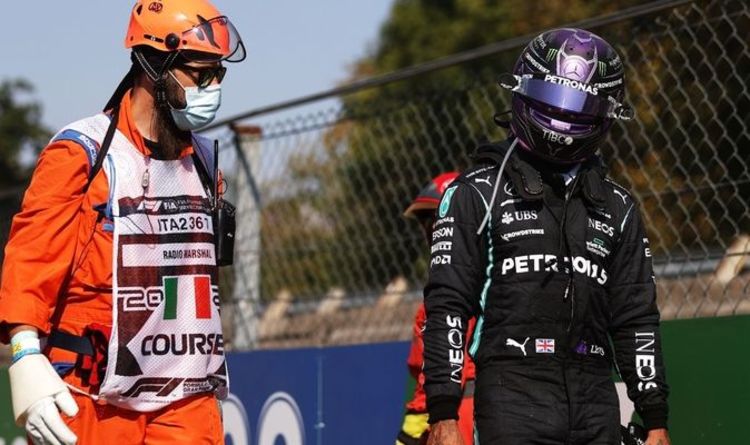 Lewis Hamilton says he has a “sore neck” after a heavy impact crash with Max Verstappen that saw the Red Bull end up on top of the Mercedes after tensions boiled over at the Italian Grand Prix.

Both drivers were out of the race after a huge crash at the Rettifilo chicane on lap 26 of the race, as the championship battle ramped up once again in Monza. It’s the second time the two have collided, as they crashed heavily into each other at the British Grand Prix.

Hamilton emerged from the pits alongside the Dutchman, as the pair headed towards the first chicane, with neither yielding, with Verstappen bumping over the sausage kerbs, collecting Hamilton, and ending up on top of his main title rival with both beached in the gravel.

“A little bit stiff. A bit sore of my neck to be honest, because it landed on my head. But I’ll be OK,” Hamilton said to Sky Sports F1.

“I was racing as hard as I could, finally got past Lando, I was in the lead so they pitted me, pit-stop was obviously slow, lost a couple of seconds. Came out, saw that Daniel came past, Max was coming, I made sure I left a car’s width on the outside to him. I went into Turn 1 and I was ahead, I was ahead going into Turn 2, then all of a sudden he was on top of me.”

JUST IN:
Lewis Hamilton ‘could have been killed’ without recent F1 rule change

Tensions were heightened from the start as Hamilton fumed on the radio, claiming the Dutchman “pushed him wide” during the opening laps of the Italian Grand Prix.

After starting fourth on the grid, Hamilton got past Lando Norris and was pulling up alongside Verstappen, but the reigning world champion had to back out of the move and ran wide, handing the place back to the McLaren of Norris.

Shortly after the Virtual Safety Car was called out – after Antonio Giovinazzi spun on the first lap and left debris on the track.

“Absolutely. Exactly the same scenario that happened in Turn 4, where I went around the outside, I was in exactly the same position, but I gave way,” he explained.

“And that’s racing. He just didn’t want to give way today, he knew when he was going into Turn 2 what was going to happen, he knew he was going over the kerb but still did it. We’ll speak to the stewards and we’ll see.”

The incident will be investigated after the race, and when asked if Hamilton would speak to the championship leader after the incident, the seven-time world champion replied: “I’m sure we’ll talk when we get to the stewards.”

The two drivers were able to walk away from the accident, with Verstappen heard fuming on the radio: “This is what happens when you don’t leave space, f**king hell.”

Both then made their way back to the garages with their helmets on, with the safety car brought out for the incident, and as a result.

The race was then won by McLaren’s Daniel Ricciardo, with his team-mate Lando Norris alongside him in second, with Hamilton’s team-mate Valtteri Bottas fighting his way up from 19th on the grid to complete the podium.

Afterwards he said: “Starting from the back, it’s never easy, and I told the team I’m going to be on the podium today,” said Bottas after the race.

“So we did, so I’m glad we can get more points than Red Bull, and I think otherwise we maximised where we started.

“Obviously a shame with the crash with Lewis and Max, we lost some points there, but from my side it was good.”