Six-time world champion and 2020 drivers championship leader Lewis Hamilton has been left furious after finishing third at the Russian Grand Prix, accusing the sport of trying to stop him from winning.

The Mercedes star copped two five-second penalties for a practice start during the formation lap after he performed it at the end of the pit lane rather than in the designated area for practice starts under team orders.

While the incident was investigated before the formation lap, Hamilton was handed two five-second penalties during the race and was furious from the moment he was told about it.

He ended up taking a 10-second stop at his pit stop that essentially ended any chance of him winning the race, with his teammate Valtteri Bottas taking out the result ahead of Red Bull’s Max Verstappen. 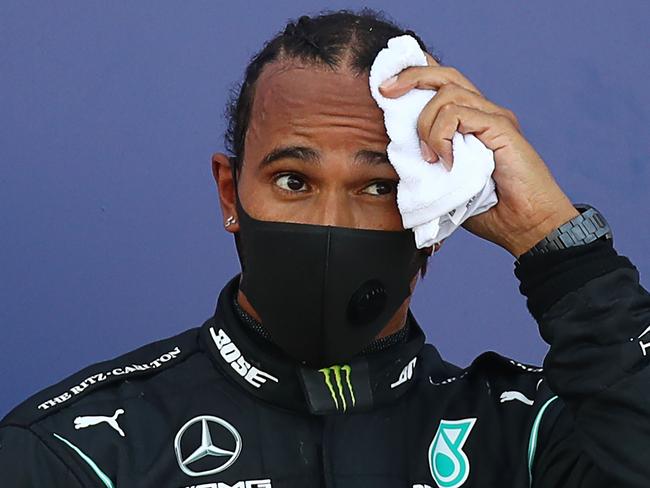 Temperatures were running hot at the Russian F1 Grand Prix.Source:AFP

“In 277 Grands Prix, I‘ve not seen two practice start violations before. But you always learn something new in Formula 1,” Croft said. “For Lewis Hamilton, it’s a double whammy.”

Hamilton called it “ridiculous” and wouldn‘t let his team forget they pitted him earlier than he wanted.

But when interviewed in the paddock on Sky Sports after the race, Hamilton appeared to float a conspiracy theory, that the penalties were an attempt for the sport to stop his charge towards equalling Michael Schumacher’s seven world titles.

A win in Sochi would have seen Hamilton move to 91 race wins for his career, which would have equalled Schumacher’s tally.

“I need to go back and see what the rules are, what exactly I did wrong,” he said.

“I‘m pretty sure no one’s got two five-second penalties for something so ridiculous. I didn’t put anyone in danger, I’ve done this at a million tracks over the years and never been questioned about it. But it is what it is.”

It also means that with two more penalties, taking Hamilton to 10 penalty points in the past 12 months, meaning he is just two points away from a one-race ban. He won’t drop any points until the Turkish Grand Prix.

Hamilton didn‘t mince his words as to what motivated the penalties after he was asked whether it seemed excessive.

“Of course it is,” he said. ”They‘re doing everything … of course it is. It’s to be expected. They’re trying to stop me, aren’t they?”

Asked if he really thought that, he said: “of course. But it‘s OK, I just need to keep my head down and stay focused and we’ll see what happens”. 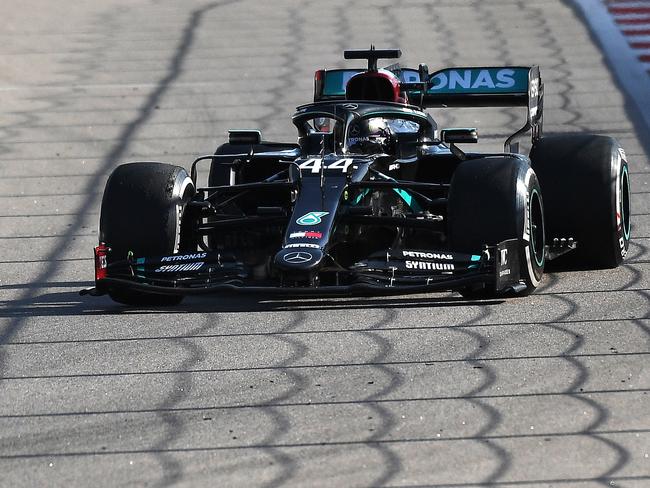 Hamilton is 44 points ahead of Bottas and 77 ahead of Verstappen.

Sky Sports‘ Johnny Herbert has served in the stewards room and said: “every time I’m in there, there’s never an inkling that that is the case.”

Fellow former F1 driver Karun Chandhok said it was Hamilton‘s second unusual penalty in three races, after he was given a 10 second drive through penalty in the Italian Grand Prix after he pitted under the safety car when the pit lane was closed.

“We‘ve driven at many many race tracks around the world and you know you can’t go that far down the pit lane when everyone else is accelerating at full speed and do a practice start,” he said. “It‘s just something that the stewards are never going to let you get away with.

“Obviously the adrenaline is still pumping, he’s still angry about it, he hasn’t had a chance to digest and allow himself to calm back down from the anger from the race. I’m sure if he goes to have a conversation with Michael Masi and the stewards, I think he will understand they’re not out to get him.” SOCHI, RUSSIA – SEPTEMBER 27: Lewis Hamilton of Great Britain and Mercedes GP prepares to drive on the grid prior to the F1 Grand Prix of Russia at Sochi Autodrom on September 27, 2020 in Sochi, Russia. (Photo by Bryn Lennon/Getty Images)Source:Getty Images

Mercedes team principal Toto Wolff said the penalty was “far-fetched” but that the team will cop it on the chin.

“I think Lewis has faced a lot of adversity in his life but to all of us, the penalty seems a little harsh,” he said. “Never before a pre-race or reconnaissance lap pit lane speeding has been penalised with an in race penalty. So that’s new. And that also can be debated.

“I think things go against him harshly sometimes and if you’re the most successful driver, you have to take that sometimes.”

I think that's pretty poor of @lewishamilton. I know he's angry and disappointed at missing out on matching Schumi's 91-race win record but accusing stewards of being bias ? Poor. #russiangp

Hamilton thinks his penalty was unjustified. Wait until he sees the Spurs game. #TOTNEW

When Hamilton asked over the radio whether he could practice the starts further forward from the usual position the Mercedes engineers thought he wanted to move just a little bit further – not down to the pit exit. They couldn't see him, hence the misunderstanding.#AMuS #F1

He did it twice

Immediately post-race, he didn‘t want to talk about the incident and barely wanted to talk on the grid post race.

“Just not the greatest day,” he said of the penalty. ”It is what it is. It‘s done now. I take the points that I got and move on.”

Asked about coming back to finish third, Hamilton said: “I didn‘t really do much, I just held my position.”