Aston Martin owner Lawrence Stroll has admitted he is tempted to offer Sir Lewis Hamilton the chance to end his record-breaking career with the historic British brand.

Canadian fashion billionaire Stroll is leading Aston Martin’s return to Formula One after 61 years away – a comeback he has called the “biggest thing to happen to the sport in decades”.

In a clear statement of intent, the renamed Racing Point team have signed Sebastian Vettel. The quadruple world champion will drive alongside Lawrence’s son, Lance Stroll, for the forthcoming campaign which starts next month.

But with Hamilton’s latest deal due to expire at the end of the season, and Mercedes understood to be exploring their future options, would the ambitious Stroll be interested in exploring the biggest transfer in recent F1 memory?

“It is definitely tempting,” he said. “Lewis in any car is great, and I am sure everyone would say yes because he is a seven-time world champion. But right now, I am extremely focused on getting started this year.” 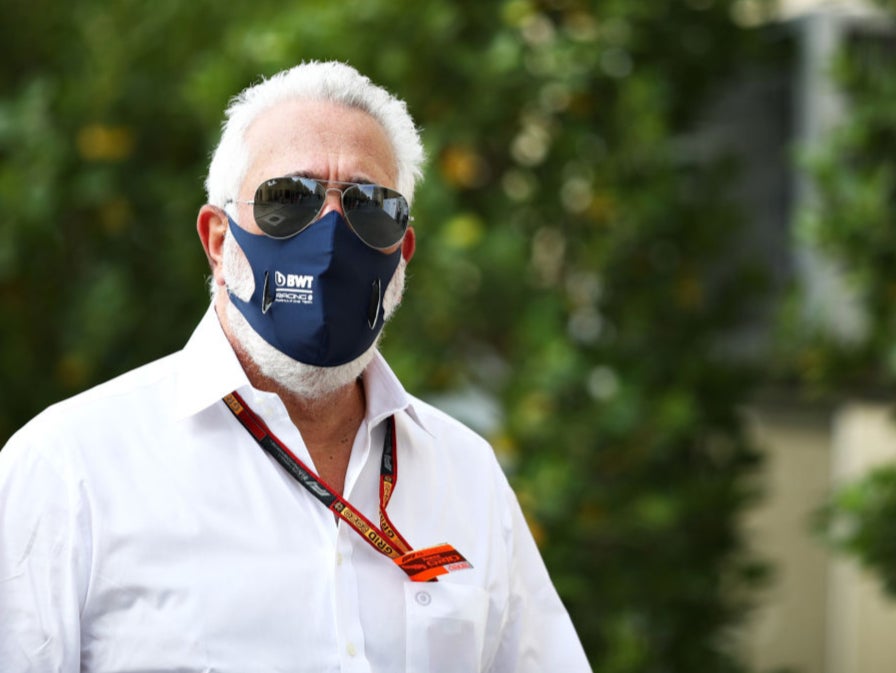 Stroll was speaking from his office at the team’s Silverstone headquarters following the announcement of a new sponsorship deal with alcohol-free brand, Peroni Libera 0.0%.

“Peroni is my favourite beer,” he says, but the 61-year-old, who made his £1.85bn fortune through investing in fashion brands including Michael Kors and Tommy Hilfiger, wants his team to be swimming in champagne.

A budget cap has been introduced for the first time in the sport’s history with the hope it will bring the field closer together.

This year, teams must spend no more than £112m. That figure will reduce to £108m in 2022 and £105m in 2023. Mercedes, winners of the last six drivers’ and constructors’ championships, Ferrari and Red Bull have all been operating at costs in excess of £300m a year.

Stroll added: “From a competitive point of view, the budget cap changes the sport dramatically.

“The big three teams were significantly outspending everyone and probably had 400-500 more staff. All of that has now gone.

“Here, we are building a brand new state-of-the-art facility. It will be the most modern facility in Formula One.

“This team has punched above its weight with significantly less resources, and I sincerely believe with the same amount of people and the same budget, there is no reason why world championships are not very much on the cards. It is very realistic to think that.”

Stroll’s acquisition of Force India in 2018 saved the British-based team from going bust. But last year he faced criticism for retaining his son ahead of Vettel’s arrival. Sergio Perez was dumped after seven years with the team.

The 22-year-old Lance Stroll has been targeted by detractors on social media who say the young Canadian has a seat purely because of his father’s money.

Responding, Stroll Snr said: “There are a lot of jealous people in the world and jealous people, who wish they were there in Lance’s position, do and say silly things. I don’t pay much attention to it, and neither does Lance.

“Do I think Lance is talented? I think he is immensely talented. I have no doubt he has demonstrated that he has world championship blood in him.

“Everything is equal when you get to the ring, and he showed that by putting it on pole in the rain in Turkey last year when the playing field was level. There are not many people who can do that.”

Stroll is also confident that Vettel will be a driver transformed after a miserable end to his Ferrari career. Dropped by Ferrari before the season started, Vettel finished 13th in the standings.

“This team has done many things, but one thing it hasn’t done is be a world champion, and what Seb brings is that mindset, the methodology, the work ethic, and the planning around being a world champion and that is invaluable,” said Stroll.

“He is unbelievably motivated to be a part of Aston Martin returning to Formula One. You don’t become a four-time world champion and then forget how to drive. There were factors on his mind last year but I don’t have one hesitation that he will be as quick as ever.”