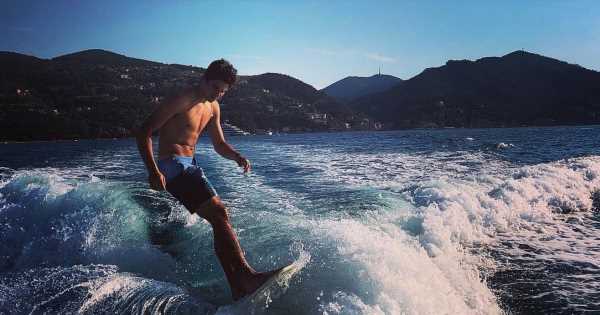 It's a well known fact that motorsport is generally a rich person's game.

An outstanding karting career, just to set you on your way, can cost upwards of £100,000-a-year.

Lewis Hamilton's dad took on three jobs to be able to fund his son's career – and he duly got the rewards with his success in recent years.

But making it to the pinnacle of motorsport with F1 has, quite simply, been easier for some rather than others.

Next season, there will be three sons of billionaire fathers on the grid. But who are they? Daily Star Sport has the lowdown…

Mention the phrase 'daddy's boy' in the F1 paddock and only one man will come to mind: Lance Stroll.

That said, the 2020 season perhaps proves that he is more than just another pay driver stealing a seat from a talented youngster. Although he finished 11th in the standings, it did come with two podiums and a pole position. which isn't too shabby for a mid-pack team.

And the good news for Stroll is that with Nikita Mazepin entering the competition next year (more on him later), he's probably not the most hated driver on the grid anymore.

Stroll's father is Lawrence Stroll, a Canadian with a love of fast cars and racing. But most importantly, with a bank balance reported to be around £2billion.

As a result, after winning the European F3 series, Stroll leapfrogged straight past F2 or the GP3 series to join the Williams team in F1 for the 2017 season. By 2019, Stroll Snr led the consortium which took over Force India and turned them into Racing Point… so guess who was brought in to drive for them? You know it. At least he has a few results to back the decision.

Away from the track, Stroll has the freedom to enjoy the things he loves most in life.

The burden of being a famous face does hit him too, and insists that the lack of privacy is the hardest thing about being at the very top of sport.

The privacy issue is probably why he keeps a lot of his private life off social media now – and there is no clear indication whether he is currently dating, though has been pictured previously with TV presenter and socialite Kimberley Garner.

A relatively quiet and unassuming character, Latifi heads into his second year on the F1 grid next year.

He finished this year bottom of the standings for full-time drivers, without a point and was out-qualified by his Williams team-mate George Russell in every single qualifying session.

But there's no surprise that he has retained his drive, given his father, Michael, is the multi-billionaire businessman who supplied a loan to the team in order to keep them running amid the reduction in revenue through coronavirus and back-to-back 10th-placed constructors' finishes.

Michael has made his money in Canada through Sofina Foods, the company which is also the primary sponsor of the Williams team.

However, Latifi's impressive performances in the F2 championship prove he does have some credentials on top of just his father's money.

Unlike the other billionaire drivers, Latifi's exploits away from the track are not particularly well documented.

He largely keeps his off-track activities off social media and has not taken part in many interviews at all about his lifestyle or childhood.

What we do know is that Lafiti enjoys active summer breaks and is often paddleboarding on some of Canada's most stunning lakes.

But other than that, Latifi appears to be simply keeping his head down and ensuring that he is known for his racing career and not his family's wealth.

Like the others, Mazepin's arrival into F1 next season comes on the back of enormous sponsorship promised by his billionaire father.

Russian star Mazepin will race alongside Mick Schumacher for the Haas team in 2021, with the duo replacing popular pair Romain Grosjean and Kevin Magnussen.

His father, Dimitry, founded a chemical company in 2007 and is worth over £5billion, and has met Vladimir Putin with his son by his side.

But Mazepin comes to F1 with more than just money – he brings plenty of controversy with it too.

The 21-year-old was once banned for a race after punching British F2 star Callum Ilott, leaving him with a black eye and a swollen jaw.

There was further drama after his F1 deal was announced, as Haas was forced to release a statement condemning his "abhorrent" actions that were filmed in the back of a taxi.

Mazepin uploaded a video on his social media while in Bahrain, where he appeared to grope a woman. The video was swiftly deleted.

However, further drama was created last week when Mazepin deleted his own apology, which didn't even mention the woman in question, from his social media accounts.

As a result, the #SayNoToMazepin hashtag has regularly appeared on social media, as fans backlash over his introduction into the sport.

Over 40,000 fans have also signed a petition to get Haas to drop him.

But with a rumoured $20million investment into the American team for each of the next two years from his father, it is incredibly unlikely that Mazepin is removed.

And just before Christmas, Haas confirmed that Mazepin was still set to be driving for them next year.

Haas made the decision to hire him in the hope that it could find the perfect balance of finance and talent that would make them more competitive, after struggling in the back end of 2020. This is despite Mazepin's lack of significant success in any feeder series.

He is likely to be all-action on the track too, having been involved in a raft of incidents in the F2 championship – including being judged "wholly at fault" for the Sochi crash in 2019 which hospitalised both himself and Nobuharu Matusushita.

Mazepin does easily see red, which could make the 2021 F1 season interesting, if not successful for the Haas team.