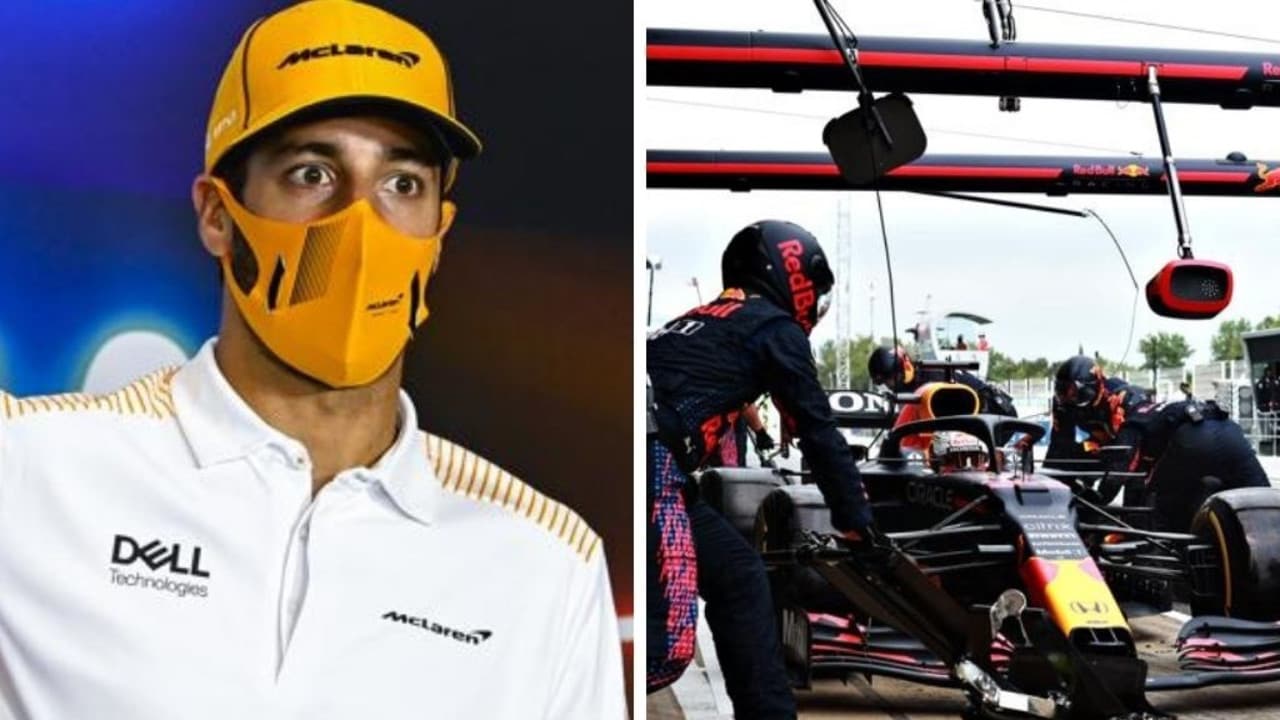 Daniel Ricciardo may be long gone but one of his most painful memories lives on at Red Bull.

Max Verstappen was Lewis Hamilton’s bridesmaid once again this season as the Dutchman finished second at the Spanish Grand Prix behind the seven-time world champion, who scored his third win from four races in 2021.

Hamilton was flawless en route to victory, doing brilliantly to recover from being overtaken by Verstappen ahead of Turn 1 and fight off his Red Bull rival.

It didn’t cost Verstappen the race by any means, but a slip-up in pit lane showed once again how Red Bull must aim for perfection if it’s to stand any chance of toppling Mercedes’ seven-year dominance of the constructors’ championship.

Verstappen’s only pit-stop for the race took four seconds — two seconds longer than it should have — because his rear-left tyre wasn’t ready as he pulled in. It doesn’t sound like a lot, but two extra seconds in F1 — particularly in pit lane — can be the difference between a race win and the runner-up trophy.

The blip reminded F1 broadcaster and journalist Jennie Gow of Red Bull’s infamous Ricciardo howler in Monaco in 2016. The Aussie was called to pit but when he arrived, his tyres weren’t ready and the excruciating delay cost him his first win of the season, and his first win at F1’s most iconic circuit – an episode he has said previously haunted him for years.

“Just looking at replays of the Max Verstappen first pit stop where the rear left (tyre) wasn’t ready, and I just get cold sweats looking at things like that,” Gow said on the Chequered Flag podcast.

“It does take me back to Monaco where it was Daniel Ricciardo, he could have won the race but his tyres weren’t ready.

“Not as bad an incident as that but still, looking on you still get that, ‘Oh, not now, not now!’”

Red Bull has some kinks to iron out.Source:Getty Images

F1 commentator Ben Edwards also had flashbacks to Ricciardo’s dark day as he watched Verstappen get stuck, saying he was “surprised” Red Bull could allow something similar to happen again.

“That incident at Monaco hurt Red Bull so badly, they were so bitterly disappointed that Ricciardo didn’t win that day, and it was about communication,” Edwards said.

“Monaco’s different because the way pit lane is laid out and getting access to things is very different from most circuits. Barcelona is a very straightforward track from that point of view, but there clearly was a communication issue.

“There are so many people talking on the radio when they’re making strategy decisions bringing a car in, that it’s very important that they have in place the priorities that everyone knows when it’s absolutely crucial what you’ve got to do.”

“There’s always a late call for a pit stop but this one, I think there was a slight delay because this must have been right on the exit of the chicane almost, seeing that if Verstappen didn’t pit, he would be passed by Hamilton, then the race is done,” Palmer told Chequered Flag.

“I think they realised not only were they protecting the undercut, they were protecting the race lead because Hamilton was crawling over the back of Verstappen, who clearly was losing the rear tyres.

“It must have been a super late call which was the right call but that long pit stop could have cost them the lead regardless.”

Verstappen needs to nail the one percenters to chase down Hamilton.Source:Getty Images

Hamilton and Verstappen have finished in the top two at all four races this year, Verstappen getting the chocolates just once in Italy.

During pre-season there were high hopes this was the year Red Bull would finally pose a genuine threat to Mercedes and while Verstappen has been in the fight each time, Hamilton is keeping him and his team at bay.

Red Bull boss Christian Horner said after the race the team actually did a great job of getting Verstappen out of the pits as quickly as they did, because he arrived unexpectedly and they hadn’t called him in.

“Unfortunately we were gearing up for the stop and then Max just arrived in the pitlane and we hadn’t actually called him in at that point,” Horner said.