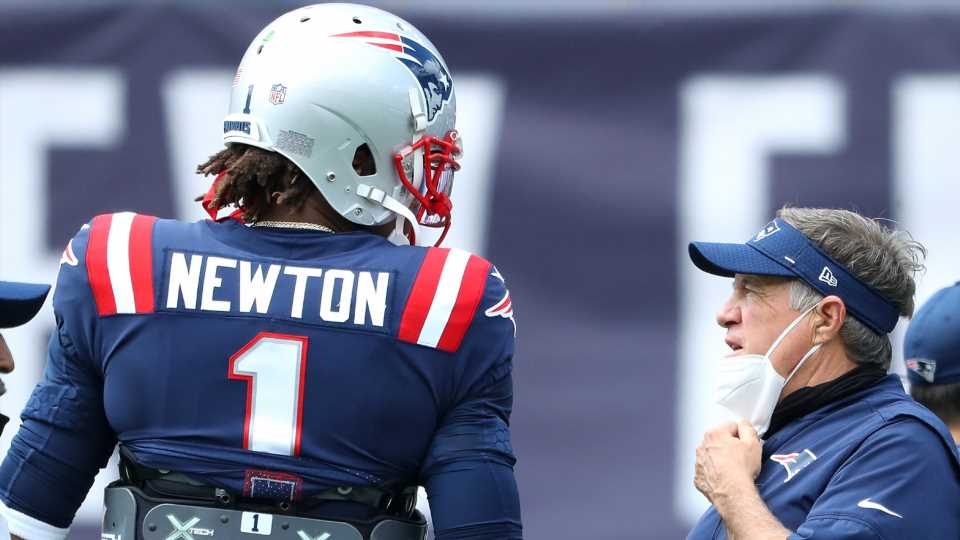 How might one know he has arrived as a coveted Patriots player for Bill Belichick? The coach makes it personal.

The only thing certain about New England’s quarterback competition heading into June is that re-signed Cam Newton and 2021 first-round pick Mac Jones will battle late into the summer. For every team dealing with a simliar situation, the initial tie goes to the veteran — until there’s enough preseason evidence to go with the rookie.

Belichick, in speaking to local reporters Thursday, had interesting early comments about Newton and Jones. In his typical manner of speaking, it might not have sounded like Belichick said much. But there was a big difference in the two responses to the core Patriots question.

“Cam’s been here all the way through. He was here at the beginning and has been a consistent participant, continues to give us the usual leadership and energy that he brings to the field and to the workouts and practice.

“Cam’s very professional, and I’m sure that he’ll continue to work hard and do his best out there like he’s always done for us. It’s never been anything but that from the day he got here.”

And here’s what the Patriots coach said about Jones:

“I think all the quarterbacks are working hard and, again, it’s a starting-over process for everybody, so some have been here, some of them haven’t. They’ve had various levels of opportunity to work in our offense, but really we’re starting everybody at the same point like we always do at this time of year.”

“Mac dove into the playbook and continues to do that, like everybody out there. We all have a lot of things we’ve got to work on. That includes everybody. So that’s what he’s doing. That’s what everybody’s doing.”

It is no secret that Belichick and offensive coordinator Josh McDaniels are big Newton fans. They adjusted to him with more designed quarterback running last season to lift an offense that had limited passing game potential.

Belichick mentioned Newton by name a couple of times and was specific about his positive attributes. With Jones, he lumped him in with the rest of the young or new players with more generic comments.

Newton’s post-Tom Brady “battle” with Jarrett Stidham never was last year, despite Newton joining the team in late June. He has the benefit of having already absorbed the Patriots’ playbook into his second offseason. Jones is a smart QB, but even as a quick study it will be difficult for Belichick to trust him with the keys to the offense a short three months later, come Week 1 of the regular season.

Of the five first-round quarterbacks in 2021, Trevor Lawrence (Jaguars) and Zach Wilson (Jets) are locks to start. Justin Fields (Bears) has a good chance, too. Trey Lance (49ers) is a slight favorite to sit. As for Jones, unless he can blow the doors off in training camp, he’s a strong bet to begin his career on the bench.