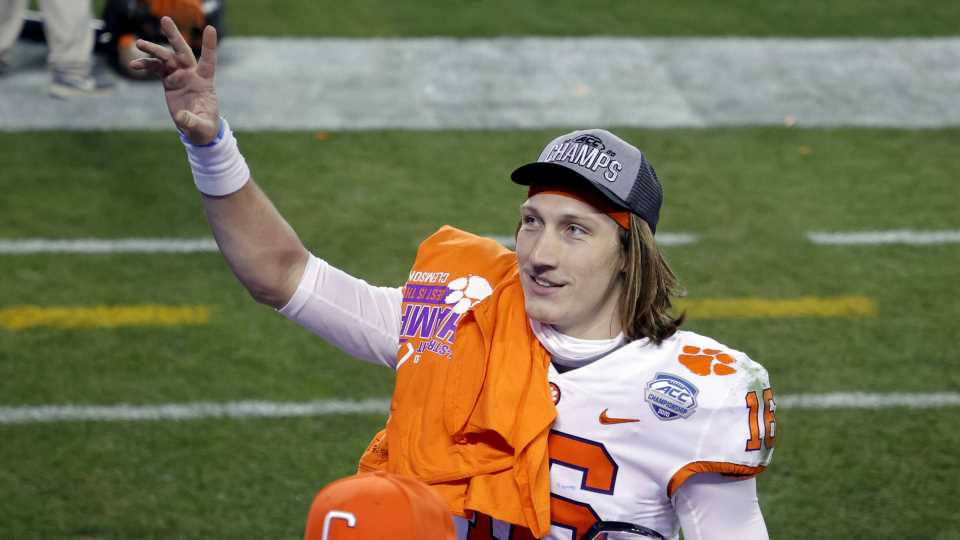 Trevor Lawrence is confident that the best is yet to come in his career after he made the long-anticipated decision to declare for the NFL Draft.

The presumptive first overall pick in the 2021 draft announced his declaration on Wednesday following a second-place finish in the Heisman Trophy voting on Tuesday.

Lawrence played three seasons at Clemson, having been touted as one of the next great NFL quarterbacks since high school, and justified his billing. He won the National Championship in his freshman year, inspiring a 44-16 rout of Alabama, and led Clemson to the title game last season, only to lose to Joe Burrow’s LSU.

Clemson fell short of a return to the same stage this campaign, beaten 49-28 by Ohio State in the College Football Playoff semifinal, Lawrence’s final game for the Tigers.

Lawrence now looks poised to become a member of the Jaguars, who hold the first overall pick after a 1-15 season in 2020.

Reflecting on his time at Clemson, Lawrence said in a video on Twitter: “I hope my legacy at Clemson is that I was a great team-mate and a great person overall. More than football, more than how I played each game, just how I treated people.

“I want that to be the main thing that I’m known for. Over the last three years that’s the thing I’ve kept as a priority. Just treating people well and being a good person. I hope that’s my legacy when I leave here.

“I’ve learned a lot from coach [Dabo] Sweeney and from all my coaches. Everyone has been so good to me and treated me like family since I’ve gotten here. That faith aspect has been the most important thing in my life.

“To all my teammates over the past three years, it’s been the most fun ride I’ve been on. I’ll look back on these three years and have the best memories. Winning a National Championship, winning a lot of games and more all the little moments, being in the locker room, being in practice, spending every day together and just having those memories – us laughing and cutting up and just enjoying life together. Those are things I’ll remember forever.

“When I look at my life as whole so far, this journey of 21 years, the most formative years have been my time here at Clemson. It’s taught me how to be a better man, no doubt and that’s the biggest takeaway.

“Obviously it’s made me a better football player but that’s kinda secondary to what it’s taught me about life. I really feel like I’m a man now and I’m ready to take on those challenges, super excited for life ahead. The best is always yet to come. But I’m grateful for Clemson and I’m going to miss it.

“I want to say thank you to everyone that’s supported Clemson, all my Clemson family, whether that’s fans, my team-mates, my coaches and my immediate family. I’m so thankful for you guys, I wouldn’t be who I am if it wasn’t for y’all. There’s so many people who have helped raise me up. I can’t wait to see what God has next for us.

“My time here has been amazing and I’ll be a Clemson Tiger forever.”