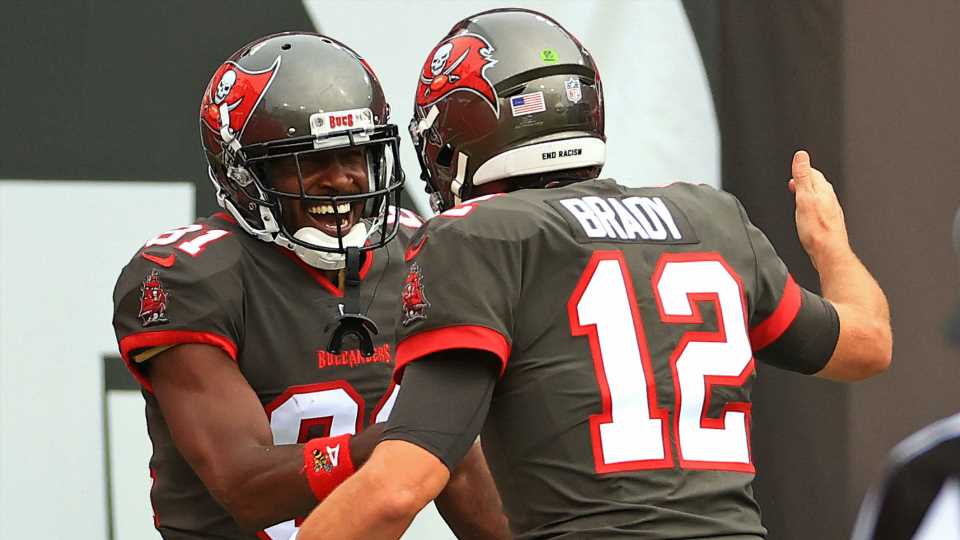 Tom Brady is always looking for Antonio Brown on the field — and looking out for him off the field.

Brady has done his best to keep the beleaguered wideout in line, including inviting him to stay at the Brady household during Brown’s tenure with the Bucs. On Sunday, Brady’s support for his teammate (and roommate) went a little bit further: The Tampa Bay QB completed a series of passes to Brown late in the team’s 44-27 blowout of the Falcons that helped Brown earn a hefty bonus.

Brown’s incentive, worth $250,000, would be satisfied by reaching one of three criteria: six touchdowns, 650 yards or 45 receptions. Brown entered the day with 34 receptions, 11 short of his financial goal. Brady helped Brown get there with seven receptions in the fourth quarter — including three on the Bucs’ final drive with just over two minutes remaining.

The first connection was a quick screen; the second and third were pop passes. Brown finished the day with 11 receptions, 138 yards, two touchdowns and a fatter wallet.

It was a big day for Brady, Brown and the Bucs overall. Brady became the oldest quarterback (age 43) to throw 40 or more touchdowns in a season, and he reached a big-time incentive himself, pocketing more than half a million dollars for finishing in the top five in passing yards this season. The connection between Brady and Brown has been brewing during Brown’s time with the Bucs; Sunday’s matchup was the boiling point. Brady openly campaigned for Brown to get a gig in Tampa.

The Buccaneers are playoff-bound (another contingency in Brown’s bonus) and they’ll face the winner of the NFC East, which will be determined after the Washington-Philadelphia matchup on “Sunday Night Football.”

With the extra cash in hand, maybe Brown can repay Brady for rent, or something.