For a few minutes there, it looked like this might be a perfect night for the Carolina Panthers. Cam Newton and company marched right down the field on their opening drive of the game, covering 75 yards on nine plays, including a fourth-down conversion. They rode Christian McCaffrey the whole way down the field, giving the diminutive back six touches, which totaled 60 yards and a score.

And then very, very quickly, the Steelers completely took over the game and did not look back, rolling to a 52-21 win on “Thursday Night Football.” Pittsburgh’s first play from scrimmage was a 75-yard touchdown pass to JuJu Smith-Schuster. Carolina’s next play saw Cam Newton get pressured deep in his own territory and decide to throw the ball up for grabs, and when he did, Vince Williams picked it off and returned it for a touchdown. Just 13 seconds after the Panthers had taken a 7-0 lead, they were down 14-7.

Carolina went three and out on its next drive, and then the Steelers calmly stuffed the ball down the throats of the Panther defense with James Conner, who ended the drive with his 10th touchdown of the season. By the end of the first half, the Steelers had 296 total yards (11.8 per play) and 31 points, along with a 17-point lead. They never looked back, pouring it on even more in the second half.

The overall numbers were overwhelming. Ben Roethlisberger finished 22 of 25 for 328 yards and three touchdowns, giving him a perfect 158.3 passer rating. Six different Steelers had multiple catches. Six different Steelers found the end zone by the end of the third quarter, and a seventh did so on the first snap of the fourth. (In order: Smith-Schuster, Williams, Conner, Antonio Brown, Vance McDonald, Jesse James, and Jaylen Samuels.) The Steelers converted all four of their red-zone trips into touchdowns on their way to scoring 52 points. They converted eight of nine third-down opportunities before things got completely out of hand, while holding the Panthers to four of 10. They sacked Cam Newton five times, picked him once, and forced both him and Curtis Samuel into fumbles.

In short, they asserted their dominance and made sure the Panthers had no chance. The Steelers once again look like an elite team, and they should be a force to be reckoned with come playoff time — especially if Le’Veon Bell returns next week and gives them yet another offensive weapon.

Here are a few more things to know about Pittsburgh’s shellacking of Carolina.

Tragedy struck the city of Pittsburgh recently when a gunman shot and killed 11 people at Tree of Life Synagogue in Squirrel Hill in what was the deadliest attack on Jews in U.S. history. Two of the victims were brothers Cecil and David Rosenthal, whose sister Michele used to be the Steelers’ community relations manager.

As he did last week, Steelers quarterback Ben Roethlisberger wore special clears designed to pay tribute to the victims of the shooting.

But he wasn’t the only QB on the field doing so. Cam Newton joined him in the tribute, wearing Steel City-themed cleats of his own.

Themed cleats obviously do not totally heal a city but the quarterbacks making sure to remember those who lost their lives is still worthy of respect.

James Conner is really good, but may be banged up

Le’Veon’s backup ain’t bad, huh? Conner carried 13 times for 65 yards and a score, his 10th of the season. He may have gotten his fifth straight 100-yard game if the Steelers didn’t go up by so many points … and if he didn’t suffer a head injury at some point. Conner was checked in the blue medical tent during the third quarter, but apparently was cleared to come back in the game a bit later.

During the break between the third and fourth quarters, however, TV cameras spotted Mike Tomlin telling Conner to head back to the locker room. He did just that, where he was evaluated for a concussion.

That’s definitely not a great sign, but the good news for Pittsburgh is they have 10 days before their next game … and they may get Bell back and be able to give Conner as long as he needs to fully recover from a potential head injury.

McCaffrey had six touches for 60 yards and a touchdown on the opening drive, including a 20-yard score on a wheel route.

Considering the Steelers had come into the game as one of the NFL’s stingiest teams when it came to defending running backs in the passing game, it was quite impressive that he got off that quickly. But then McCaffrey hit the Steelers with another touchdown on the very same route later in the game.

The second-year back ended the night with 138 total yards and three scores on 19 touches. He was really good! Unfortunately, the rest of his team was so bad that it didn’t matter.

Speaking of players with standout games, how about inside linebacker Vince Williams? He put the Steelers into the lead just a few minutes in with his pick-six of Newton on a busted play.

On the very next drive, he came flying in for a sack to shut down any chance of the Panthers moving the ball downfield. He finished the night with four tackles (one for loss), a sack, a pass defensed, one additional hit on Newton, and that touchdown.

He wasn’t the only defender with some big numbers. Cameron Heyward finished with two tackles for loss, two sacks, and two QB hits. Bud Dupree added a sack and two tackles for loss. Joe Haden and Coty Sensabaugh completely shut down the Panthers’ perimeter passing attack.

The latest on Le’Veon

You may have heard that Pittsburgh’s usual starting running back, Le’Veon Bell, has still yet to report to the team. Bell was franchise-tagged this offseason and was not thrilled about that, so he’s simply stayed away all year. Is he getting closer to a return? Well, nobody really knows.

What we do know is that he is now in Pittsburgh. And according to NFL Network’s Ian Rapoport, the team apparently wants him back very badly.

Steelers owner Art Rooney, meanwhile, said that while he doesn’t know for sure, he expects Bell to show up next week, prior to the Tuesday deadline. (If he doesn’t, he cannot play this season.)

“I don’t know what his plans are, but I would say at this point we expect him to come back next week,” Rooney said. “We know he’s back in Pittsburgh and so we’re hoping to have some communications with him over the weekend and we’re kind of expecting he will be back next week.”

For his part, Bell spent much of the evening live-tweeting the game, showing some love for Smith-Schuster and Conner.

Feel free to read into that however you’d like.

The Steelers pushed their record to 6-2-1 and next week will get a chance to avenge their 2017 divisional round playoff loss to the Jacksonville Jaguars. The Steelers are in first place in the AFC North and now breathing down the necks of the Chiefs and Patriots for one of the top two seeds in the AFC.

Carolina’s record dropped to 6-3, and the Panthers are now looking at a possible two-game gap between them and the first-place Saints, if New Orleans can score a win against the Bengals this weekend. The Panthers still look good for a wild card spot, but things are going to be tighter than they looked before this blowout. Next up for the Panthers is a road date with the Detroit Lions.

Check out our live blog of the festivities below.

Thank you for joining us. 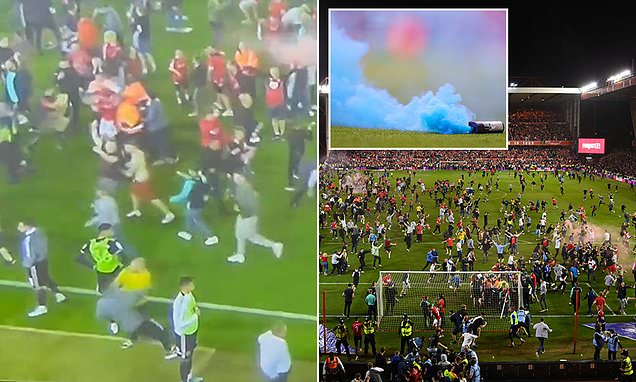