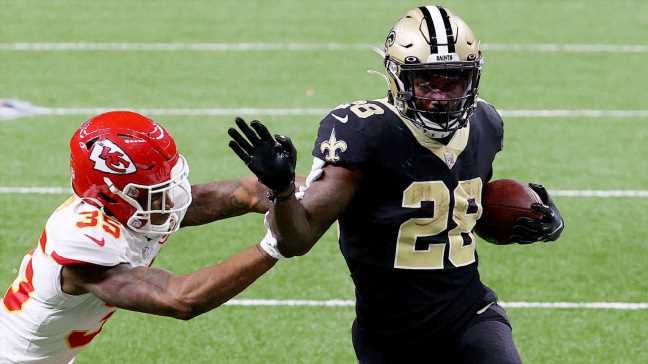 OWINGS MILLS, Md. — The Baltimore Ravens reached a one-year agreement with running back Latavius Murray as they quickly scramble to patch up an injury-ravaged backfield before the regular season begins, a source told ESPN’s Adam Schefter on Friday.

The deal is worth up to $2 million, the source told Schefter.

Murray, 31, becomes the fourth running back signed by the Ravens this week, joining Trenton Cannon, Le’Veon Bell and Devonta Freeman. Bell and Freeman are on the practice squad. He was abruptly cut by the New Orleans Saints on Tuesday, when Murray, who was scheduled to make $3.15 million in salary and bonuses this season, refused to take a pay cut.

The addition of Murray comes one day after Baltimore lost Gus Edwards, who tore his ACL on Thursday. Edwards is the third Ravens running back to suffer a season-ending injury in a 12-day span.

Murray is the most accomplished running back on the active roster and has the potential to eventually become the Ravens’ featured back once he gets a comfort level with the offensive system.

For now, Ty’Son Williams, the only healthy running back who’s been on Baltimore’s roster before Wednesday, is expected to make his first career start in the opener at the Las Vegas Raiders on Monday Night Football.

Williams, who went undrafted out of BYU last year, spent last season on the Ravens’ practice squad and doesn’t have an NFL carry.

The Ravens have led the NFL in rushing the past two seasons and are confident in how their scheme produces effective runners, especially with dual threat quarterback Lamar Jackson drawing so much attention. Over the last two years, every Ravens running back with at least 100 carries has averaged over 5 yards per carry: Edwards, Dobbins and Mark Ingram.

Murray’s physical running style in between the tackles mirrors Edwards and is considered an ideal fit in Ravens’ smash-mouth system. A valuable backup to Alvin Kamara in New Orleans, Murray ran for 656 yards and averaged 4.5 yards per carry in 2020. He has recorded 4,991 rushing yards, 1,294 receiving yards and 45 touchdowns in his seven-year career.

Injuries have devastated the Baltimore backfield over the past two weeks. Starting running back J.K. Dobbins tore the ACL in his left knee in Baltimore’s season finale at Washington on Aug. 28. Justice Hill, the projected No. 3 back, tore his Achilles during practice on Sept. 2. Then, Edwards tore his ACL just after cornerback Marcus Peters suffered a season-ending knee injury during practice Thursday, just four days before Baltimore’s season opener.

Cannon, who was signed to the 53-man roster on Wednesday, is expected to provide depth at running back and make an immediate impact on special teams. The Ravens are expected to promote either Freeman or Bell from the practice squad a few hours before Monday’s game.

With Jackson, Baltimore has averaged an NFL-best 198.9 yards rushing per game in the previous two seasons. But the only current Ravens running back who had a carry for them last season was fullback Patrick Ricard, who had minus-1 yards rushing.

The Ravens have shown the ability to adapt over the years in the ground game. In each of the last three seasons, Baltimore has had a different lead rusher at running back: Edwards (718 yards) in 2018, Ingram (1,018) in 2019 and Dobbins (805) last season.

The loss of Peters, a Pro Bowl cornerback, is the most significant injury to the Baltimore defense this year. In total, the Ravens have had five players suffer season-ending injuries in a rough 19-day stretch.