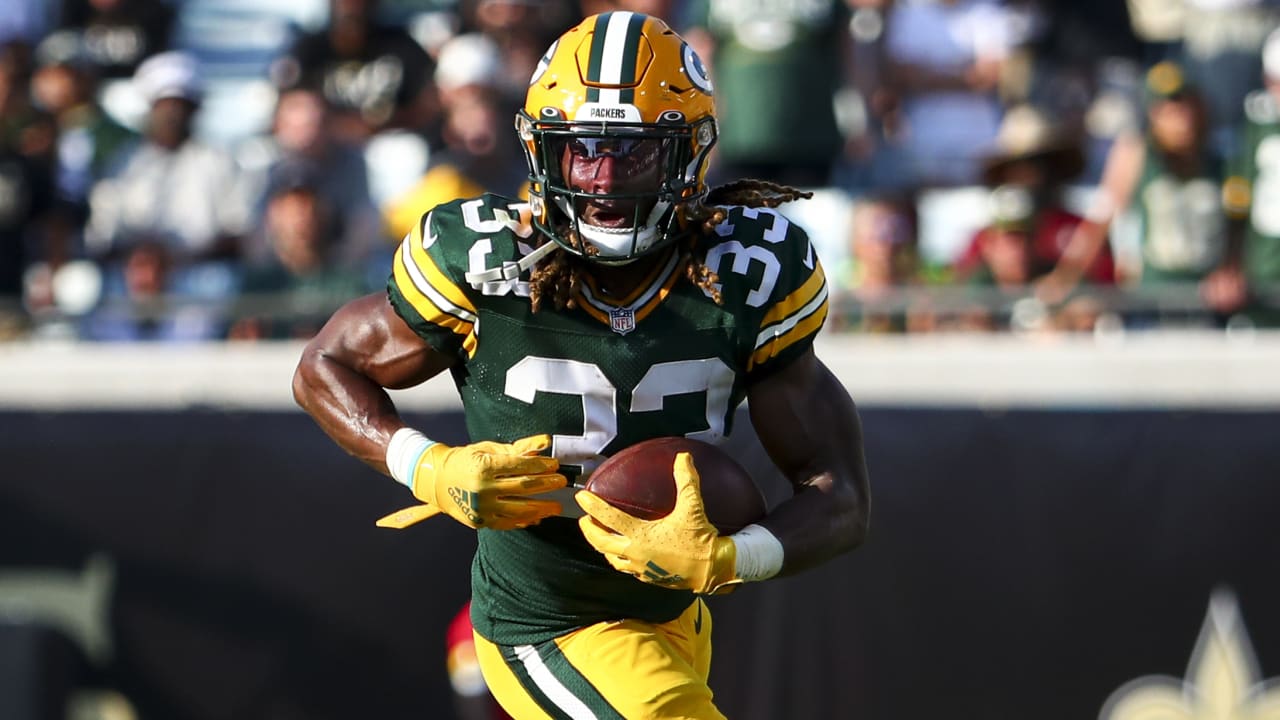 More is not always better, but in some cases, it’s exactly what’s needed.

For example, if a team’s star running back sees the football just a handful of times in a loss, said back should probably receive more touches going forward. Or if a promising young receiver’s sole target results in an explosive gain, perhaps that receiver should be thrown to more the next time out.

Jones’ paltry workload Sunday was a surprise, considering the massive numbers he’d been putting up since Matt LaFleur became head coach in 2019 — over the past two seasons, Jones racked up 2,188 rushing yards (seventh most in the NFL) and 25 rushing touchdowns (third most). And he got there by averaging 17.8 touches per outing. Giving him five carries (he also caught two passes) in a pass-heavy game plan during Green Bay’s drubbing at the hands of the Saints was not smart football. Look for Jones to be much busier against Detroit on Monday.

After a promising rookie season (15.5 yards per catch), Mims appears to have been marginalized in the Jets’ game plan, running with the second-team offense this summer and garnering just one target in Sunday’s loss to the Panthers. What Mims did with that one target — hauling in a 40-yard downfield strike, Zach Wilson‘s longest completion of the day — showed what he’s capable of. A big-play threat like that should be utilized, not buried at the bottom of the depth chart.

Andy Dalton should not have been on the field at the end of Sunday’s blowout loss. Despite entering the fourth quarter with a 13-point deficit, the Bears had Dalton run their remaining two drives, the last of which came after the Rams had pushed their lead over Chicago to 20. Of the six plays on that last possession, Dalton connected on two passes for 11 yards, threw three consecutive incompletions and was sacked on fourth down. By sticking with the veteran to the bitter end, the Bears wasted an opportunity to help fast-track Fields’ development. I appreciate that the Bears are trying to sprinkle Fields in here and there — he scored his first TD on Sunday — while leaving the full-time starting burden on Dalton’s shoulders. But Chicago should give Fields experience running the offense for an entire series when appropriate. He and the team will benefit in the long term.

What is it that Urban Meyer doesn’t see in one of the most prolific undrafted free agent running backs in NFL history? Coming off an eye-opening 1,070-yard rookie campaign, Robinson received just eight touches in Jacksonville’s loss to Houston, surpassed in that category by eighth-year pro Carlos Hyde — who, of course, played for Meyer at Ohio State. Robinson’s usage may have been decreased even further if first-round pick Travis Etienne (out for the season with a Lisfranc injury) had been healthy. Quarterback Trevor Lawrence needs time to develop, and getting Robinson more involved in the game plan would help give Lawrence a bit of a cushion as he adjusts to the NFL.

I understand why the Giants would want to go slowly with Barkley as he comes back from the knee injury that knocked him out for most of the 2020 season. So I’m not faulting the team for giving Barkley just 11 touches against the Broncos, the second-lowest single-game mark of his career. But if Daniel Jones and the passing game are to progress according to schedule this season, Barkley will need to play a bigger role in the near future — ideally, by Week 3 or so, Barkley will have worked up to 20-25 touches per game, to help take some pressure off Jones in a crucial season for the quarterback and franchise.

Mike McCarthy is a pass-first coach by nature, and attempting to keep up with Tom Brady in the opener obviously necessitated throwing the ball — per offensive coordinator Kellen Moore, Dak Prescott did check out of 12 called runs against Tampa’s tough ground defense, after all. It surely further hurt Elliott’s final numbers (13 touches — 11 carries and two catches) that guard Zack Martin was out. While acknowledging those factors, I wanted to put Elliott here to emphasize how important it is that Dallas not waste the slimmed-down star this season. When he did have the ball, Elliott looked like a completely different back than he did at this time in 2020, in terms of quickness, and everyone will be better off if he gets more chances to “rock and roll,” as Moore put it. Pollard — whom I’ve long been high on — did better in scrimmage yards (43 on seven touches) than Elliott (39 on 13), but he also should be playing a bigger role.