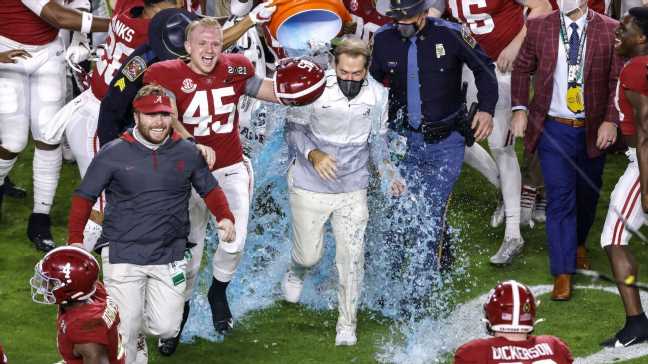 Saban won his record seventh title when he led Alabama to a 52-24 win over Ohio State in the College Football Playoff National Championship on Monday night in Miami.

Saban said amid the postgame celebration that he hadn’t thought much about passing Bryant.

“I’m just happy we won tonight,” he said. “And I really haven’t thought about that ’cause you’re always looking forward. And I just love this team so much and what they’ve been able to do. I can’t put it into words.”

Six of Saban’s championships have come during his 14 seasons at Alabama. His first title came in 2003 at LSU.

Ironically, Saban was never interested in coaching when he was growing up as a star high school quarterback in West Virginia and later as a converted defensive back at Kent State. It took Hall of Fame coach Don James convincing him to join the staff at Kent State as a graduate assistant in 1973 as Saban waited for his wife, Terry, to finish her degree.

The rest is history. Saban got the coaching bug and would bounce around as an assistant at stops in college and the NFL before landing his first head-coaching job at Toledo in 1990. Saban took a team that had gone 6-5 the season before and led them to a 9-2 record and a share of the MAC Championship.

Five years later, after leaving to become defensive coordinator on Bill Belichick’s staff with the Cleveland Browns, Saban returned to college football as a Power 5 head coach at Michigan State.

His only exit from the college ranks since then was a two-year stint as head coach of the Miami Dolphins where he went 15-17 before leaving for Alabama.

Saban said he discovered that he preferred the college game to the pros. Without a salary cap and free agency to deal with, he could exhibit greater control as a head coach in college. What’s more, he said he enjoyed working with young people.

Leveraging the history and resources of Alabama, it didn’t take Saban long to build a dynasty.

He won 12 games in his second season in Tuscaloosa and then went 14-0 and won the BCS National Championship in 2009.

Since 2009, Alabama and Saban have won half the BCS and CFP National Championships played.

At 69 years old, he shows no signs of stopping.

“I love doing what I do, and want to continue to do it for as long as I feel like I can contribute in a positive way to the program,” Saban told reporters last month. “That’s about the only plan I have for the future.”

He later added, “If I thought that my presence here was not something that was a positive for the University of Alabama or with the program, with the players, then I’d say it would be time not to do it anymore.”