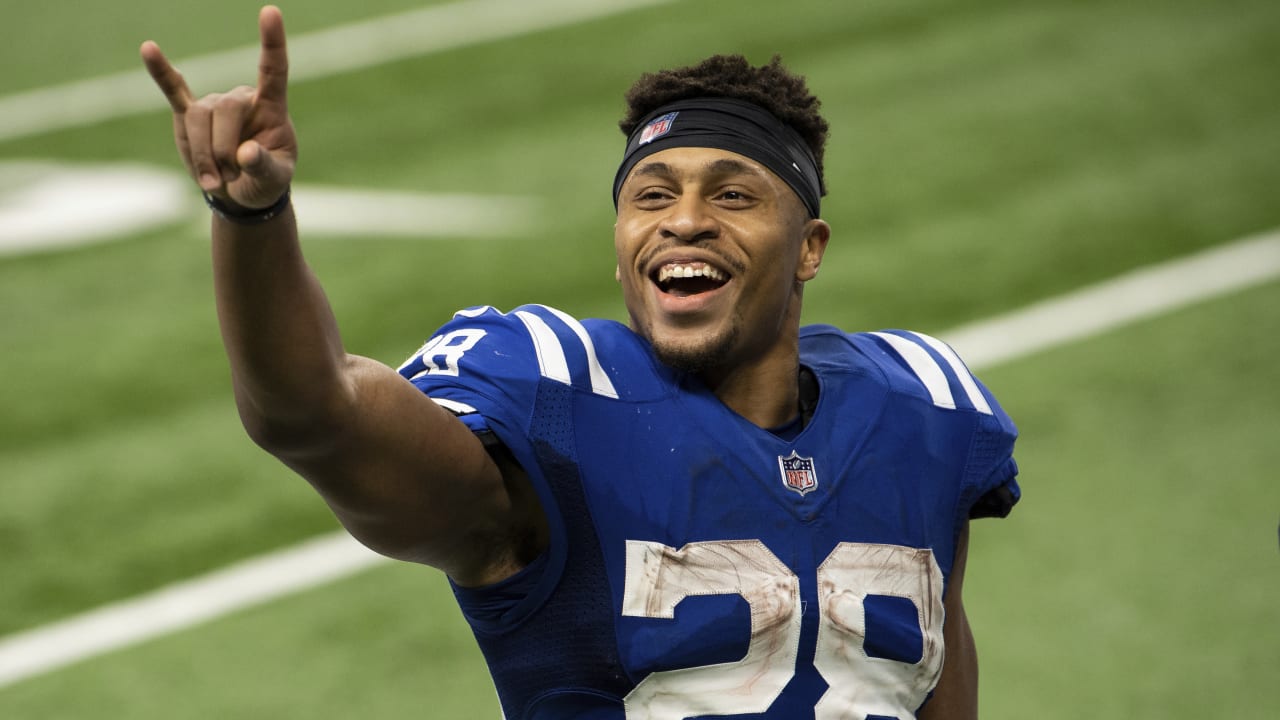 We’re on the brink of the inaugural Super Wild Card Weekend, and all I’ve heard about are the usual playoff suspects: Tom Brady﻿, Aaron Rodgers﻿, Drew Brees﻿, Ben Roethlisberger﻿, blah, blah, blah. What about the running backs?! I mean, Derrick Henry just had a historic regular season, and the position STILL isn’t getting any love.

This year’s playoff field is full of rookie talent — Baltimore’s J.K. Dobbins﻿, Kansas City’s Clyde Edwards-Helaire (if healthy), Los Angeles’ Cam Akers﻿, Buffalo’s Zack Moss and Washington’s Antonio Gibson﻿, among others — but there’s no one that excites me more than Taylor.

For starters, Taylor’s coming off a 253-yard rushing performance in the Colts’ Week 17 victory over Jacksonville, breaking Hall of Famer Edgerrin James’ franchise record for rush yards in a game (219). But Sunday’s effort wasn’t a fluke. He’s performed this well throughout the second half of the 2020 season. Since Week 11, Taylor ranks in the top five in the league in a number of categories, including carries per game (19.8), rush yards per game (123.5), yards per carry (6.2) and scrimmage touchdowns (eight). This impressive stretch helped him land third in rushing yards (1,169) by season’s end behind only Henry (2,027) and Dalvin Cook (1,557).

However, as well as Taylor finished the season, he certainly didn’t start off so strong. It seemed to me that the NFL’s pandemic-altered offseason, which wiped out the preseason, hindered his performance in the early going. He was thrust into the starting role after Marlon Mack﻿’s season-ending injury in Week 1, but in Taylor’s first nine games (eight starts), he reached at least 90 rush yards only once.

Things started to slow down and click for the rookie in the second half of the season. The Colts boast one of the league’s top offensive lines and they’ve done an exceptional job paving the way for Taylor. He’s hitting holes with burst and avoiding contact until he’s well past the line of scrimmage, which is an ideal situation for a 5-foot-10, 226-pounder whose physical play makes him susceptible to hits. Just look at the data from Next Gen Stats for proof: Taylor has gained 180 rush yards over expected (seventh-most among running backs with at least 100 carries) and .78 rush yards over expected per attempt (eighth-highest in the NFL) this season.

That’s the type of production I expected to see from the Colts’ rushing attack when the team drafted Taylor back in April. The Wisconsin product is a perfect fit in Frank Reich’s offense as a downhill runner with short-area quickness and speed. He’s played exceptionally well over the last few weeks with explosive run after explosive run, including a whole slew of ’em in Week 17.

If he can continue his hot streak, the Colts should have a chance to upset a talented Buffalo Bills team in the Super Wild Card Weekend’s opener (1:05 p.m. ET Saturday on CBS). Taylor has to be the guy in this matchup, and I have no doubt that he can have a big game against Sean McDermott’s 17th-ranked run defense. Taylor’s success will dictate everything else offensively for the Colts and could catapult them on a deep playoff run, especially when you pair the rushing attack with their top-10 defense.

I don’t think I’ve seen a more perfect fit between a team and a running back since Ezekiel Elliott and the Dallas Cowboys were united in 2016, when Zeke began trouncing over defenses behind a special offensive line. Like Elliott in Dallas, Taylor is in the perfect situation to succeed for years to come.

Former NFL rushing leader and current NFL Network analyst Maurice Jones-Drew will survey all running backs and rank his top 10 each week of the 2020 season. His rankings are based on this season’s efforts alone. Here is MJD’s end-of-the-season list.

I wrote a few weeks ago about Henry’s Hall of Fame resume and what he still needed to do to ensure he will one day have a bust in Canton, Ohio. He checked one of the boxes Sunday when he became the eighth player in NFL history with 2,000 rushing yards in a season. His 2020 campaign was one for the books and there’s a chance he could check another box in the postseason with the way he’s running.

Cook and Alvin Kamara are 1A and 1B when it comes to the league’s best all-around running back this season. Cook amassed nearly 2,000 scrimmage yards in 14 games as the centerpiece of Gary Kubiak’s offense, further proving he was worth every penny of the contract extension he signed in September.

Kamara did not play in Week 17 after testing positive for COVID-19, but the Saints are optimistic he’ll return for Sunday’s game against the Bears. He finished the regular season as the team’s leader in receiving yards (756) on a career-high 83 catches, and he also ran for a career-high 932 yards. I love the way Sean Payton utilized his star running back by spreading his workload across the run and pass games to limit his exposure to big hits. Kamara was as effective in 2020 as he was in his breakout rookie season, which is exactly what the Saints need if they intend to finally get back to the big game.

Chubb missed four games due to injury, but made the absolute most of his opportunities when healthy this season, helping the Cleveland Browns get to the postseason for the first time in nearly two decades. Chubb has strung together an impressive first three seasons in averaging 5.2 yards per carry in his career. He logged at least 1,000 rushing yards and 5.0 yards per carry in each of the last two years, joining Derrick Henry as the first players to hit those marks in consecutive seasons since Jamaal Charles (2009-10). Chubb gets his first postseason opportunity on Sunday against the Steelers. He’s averaged 15.6 carries and 68.8 rush yards against Pittsburgh in five career games, but will be without one of his top blockers in Joel Bitonio﻿, who landed on the reserve/COVID-19 list on Tuesday.

As mentioned above, Taylor’s impressive second half has catapulted him up the rankings each week. Since Week 11, his 741 rush yards are the second-most in the league behind only Derrick Henry (1,081). I expect the rookie to continue this type of production against even some of the best defenses in the playoffs.

Aaron Rodgers has made all the headlines but Jones has given Matt LaFleur’s offense a consistent run game for the second straight season. The attention Jones, who’s averaging 5.2 yards per carry for his career, demands from defenses in the run game too often goes overlooked, but that’s been the story of his NFL career. He had a career-high 1,104 rushing yards (fourth-most in the NFL) on 201 carries a year after he scored a league-leading 16 rushing touchdowns, yet no one is giving him his due. Give this man some respect, y’all!

Montgomery has played a huge part in Chicago’s offensive turnaround in the second half of the season, averaging 99.7 rush yards per game since Week 12 (third in the NFL in that span). Thanks to his second-half surge, Montgomery has recorded career highs in just about every major rushing category and finished tied for fifth in the league in rushing yards.

Robinson didn’t even play the final two games of the season and still finished in the top five in rushing yards (tied with Montgomery). If you would’ve told me at the beginning of the season that he’d join Jonathan Taylor as the only rookies in the top five, I wouldn’t have believed you. But kudos to the undrafted rookie for having one helluva season.

﻿Jacobs proved his rookie performance was no fluke when rushing for 1,065 yards and a career-high 12 rushing TDs in 2020. It’s no surprise then that Jacobs has remained the center of Jon Gruden’s let-it-fly offense. He’s a consistent runner between and outside the tackles and is deserving of another top-10 finish.

The rookie running back deserves a top-10 spot here after the campaign he’s had. Dobbins is the only running back to average at least 6.0 yards per carry this season (min. 100 attempts), and he’s gained +222 rush yards over expected (fourth-most in the NFL) this season, according to Next Gen Stats. His production in Year 1 speaks volumes about the Ravens’ excellent rushing attack as well as Dobbins’ explosiveness and ability to break tackles.

The Ground Index presented by FedEx ranks NFL running back performances all season long. Check out the weekly FedEx Ground NFL Players of the Week and cast your vote after Sunday Night Football.