Former Mississippi State wide receiver De'Runnya Wilson has been killed in an apparent homicide in Birmingham, Alabama, according to Sgt. Johnny Williams of the Birmingham Police Department.

Williams said in a police video that investigators arrived at 2128 Northland Avenue on Tuesday to investigate "a person that was down."

"They received information from a relative that the victim was unresponsive inside the home. Once arriving, our officers discovered information that led them to investigate this as a homicide," Williams said.

Williams later identified the victim as Wilson, 25. Williams said there are "limited details on the investigation."

"We are currently trying to contact anyone in the area and gather additional information as to what may have occurred during this homicide," Williams said.

Wilson was a three-star recruit out of Wenonah High School in Birmingham before becoming a Mississippi State Bulldog from 2013-2015. In his three seasons at MSU, Wilson had 133 catches for 1,936 receiving yards and 22 touchdowns.

His 22 receiving scores is tied for second all-time in program history. He ranks No. 6 in all-time catches and No. 7 in receiving yards. Wilson was one of quarterback Dak Prescott's top targets during some of the best seasons in Mississippi State history. The duo connected on 19 touchdowns, making them the most prolific quarterback-receiver tandem in school history. 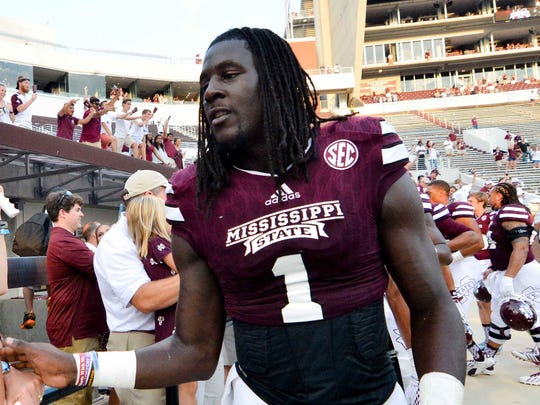 Mississippi State ascended to No. 1 in the country for the first time in school history in 2014 thanks in part to Wilson, who scored touchdowns against LSU, Texas A&M and Auburn during that season.

Wilson also caught eight passes and had a career-high 117 receiving yards and a touchdown against Ole Miss in 2014, albeit in a loss for Mississippi State.

Wilson's best season came as a junior in 2015 when he caught 60 passes for 918 yards. Wilson is one of just eight receivers in program history to eclipse 900 receiving yards in a single season.

Wilson played in seven basketball games for the Bulldogs during the 2013-14 season before fully committing to football. He was named Mr. Basketball in the state of Alabama after his senior season at Wenonah.

Wilson was nicknamed "Bear" by his high school coach, who said he was a "bear of a load" every time he hit the court or the field. The nickname stuck through his time at Mississippi State.