On a dreary day in an empty stadium against a nondescript opponent in a nothing game, Joe Burrow injured his left knee. Early in the 3rd quarter of a game the Bengals were winning, Burrow left the field on a cart. He took the football season with him.

In a laudable example of graceful restraint, CBS refused to show the injury twice. We didn’t need to see it again, anyway. Around Cincinnati, a replay would have been redundant. We already know what sports heartache looks like. Cue the Carson Palmer hit.

"We were getting the offense in a direction we thought was exciting," Zac Taylor said after the game. He was right about that. The coach was finding his stride as a play caller, last week’s disaster at Pittsburgh notwithstanding. You could see that clearly in the first half in suburban Washington Sunday. Burrow had little trouble picking apart a good D.C. defense. Burrow and his receivers played a possession game, hitting the football equivalent of singles up the middle. 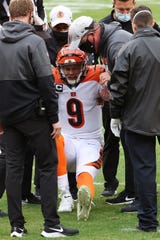 Bengals quarterback Joe Burrow is helped off the ground after injuring his left knee against Washington, taking what's left of the season with him. (Photo: Geoff Burke, USA TODAY Sports)

Five yards, then seven yards, then 11, then 13. Zip, zip, zip, 21 completions in the first half, from 29 throws. Establishing rhythm, comfort and a clean pocket. Burrow, again looking refined beyond his years. Taylor, looking like a latter-day Bill Walsh.

And then it ended. The fun, the progress, the hope with which St. Joe had blessed beleaguered Bengals fans. Gone until sometime next season. Between now and Burrow’s return is nothing but killing time. That’s not to disparage anyone else. You know what I mean.

One of these seasons, this won’t happen so much around here. The karma will reverse. There will be a reward to match all the disappointment. A reason for Kenyon Martin’s broken leg will become clear, Greg Cook’s shoulder will never go lame, Johnny Cueto will hoist a trophy over his golden right arm. Payback will be a word that rhymes with stitch. All that will happen. It has to, otherwise, what’s the point?

Not now, though. Now, Joe Burrow is going to get his knee surgically repaired and the only emotion that will run more rampant than despair will be blame. It took less than a minute after Burrow fell, broken, for the Twitter hate machine to start taking bites out of Mike Brown.

That quickly spread to invective for Taylor, followed by woe-is-us and general malaise. Let’s say this about that:

Mike Brown didn’t do wrong by Burrow or you by going cheap on offensive linemen. Tua Tagovailoa is starting in Miami for a team that went 5-11 last year while allowing its QBs to be sacked 58 times. Justin Herbert is starting for the L.A. Chargers, another 5-11 club in ’19. It’s unrealistic to think someone who buys a shiny new car is going to leave it in the garage.

Where Brown went wrong was in deciding, along with Taylor, to run Burrow out to begin the season behind a line that was by any estimation a mess. Before the season, the Bengals should have signed a dependable veteran QB and allowed Burrow time not to get killed.

That’s not a second-guess. I wrote it and talked about it back then. Still, it’s hard to blame the owner and his head coach for playing Joe Burrow immediately. And Burrow rewarded their belief by playing like a five-year vet.

Burrow "showed he was mentally ready to go, even from the summer Zoom meetings," Taylor said. I’d asked Taylor about starting Burrow from Day 1. The question wasn’t about Burrow. It was about the offensive line.

"The last couple weeks the line has done a good job keeping people off him. They’ve been moving in the right direction," Taylor said Sunday. "He has had a great pocket.

"People keep talking about the offensive line without seemingly watching the film for the last four weeks. We’ve felt like we’ve made a lot of progress. We’re not going to apologize for anything."

Burrow was making the line better. Taylor’s calls were, too. Taylor designed singles up the middle. Burrow, incredibly savvy for a kid, and instinctive, was able to put his bat on the ball nearly every time. That resulted in an effective offense and a QB who didn’t have many grass stains on the back of his jersey. Even the world’s greatest pass rushers need three seconds or so to reach a QB.

Still, the Bengals started rolling the dice the day they named Burrow the starter. And now they will look for the veteran backup they should have looked for in August.

Burrow showed the team what he could do behind a makeshift line. It’s time for the team to show Burrow it can keep him upright. Not every season has to end this way.

Winners and losers from the second College Football Playoff rankings