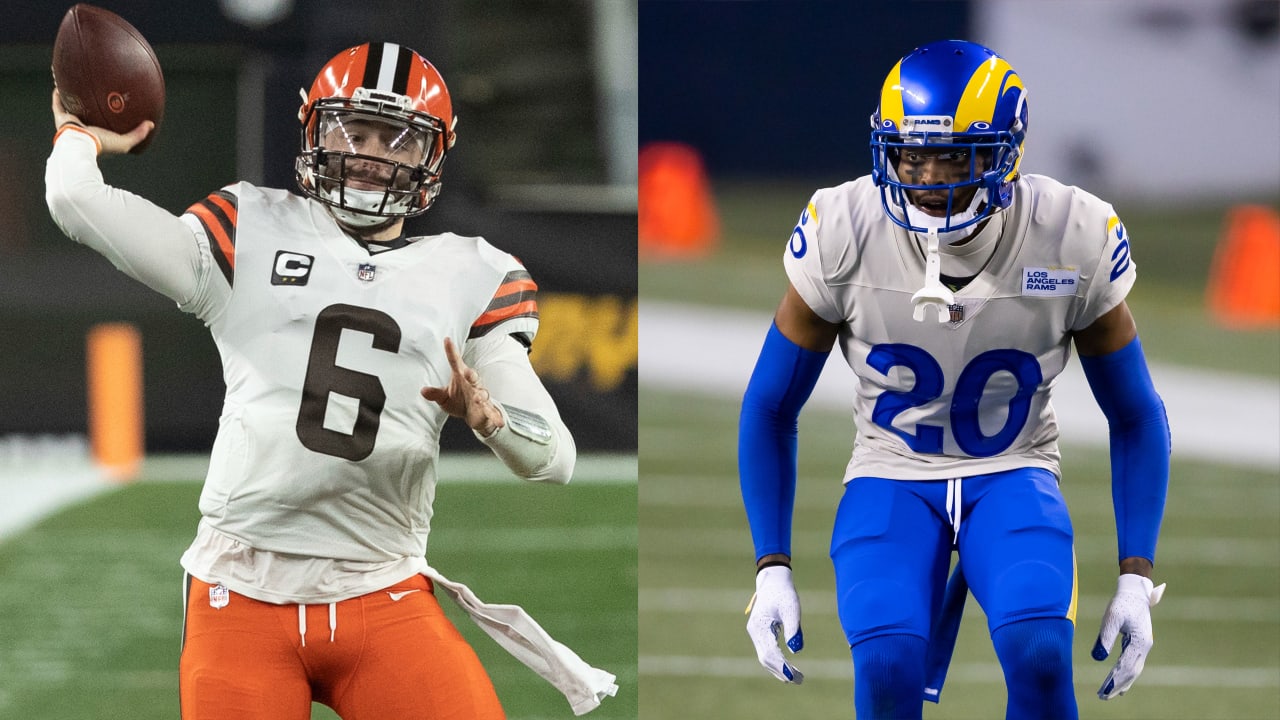 The four lower seeds vying to keep their Super Bowl LV dream alive have their work cut out for them this weekend. Take the Browns, who are viewed as a clear underdog in their Divisional Round bout with the reigning champion Chiefs despite earning a resounding win last Sunday in a matchup many billed as a similarly lopsided battle. Although one member of the team they recently beat is sure of the Browns’ impending demise, we’re here to give Cleveland fans — and supporters of the Los Angeles Rams, Baltimore Ravens and Tampa Bay Buccaneers — reason to believe a spot in Championship Sunday is more than possible.

Let’s dive into one Next Gen Stats theme for each underdog that might prove to be the catalyst for an upset in the Divisional Round.

The Packers are a machine when it comes to gaining yards through the air, with Aaron Rodgers﻿’ MVP-caliber season buoyed by the excellence of Davante Adams﻿. Adams has been stellar on out-breaking routes when aligned inside, ranking in the top seven in targets, receptions and touchdowns when running such routes from the slot. He’s run nearly 30 percent of his routes from the slot, the highest rate for Adams in the last five seasons, and owns a fantastic reception percentage of 83.6 on targets from the slot (second highest in NFL this season, min. 25 targets). His seven touchdowns out of the slot are the third most in the league, presenting the Rams with quite a challenge.

Los Angeles has a legitimate counter in cornerback Jalen Ramsey﻿, who has aligned in the slot on 16.3 percent of defensive snaps this season (including playoffs), the highest rate of his career. Should the Rams send Ramsey to shadow Adams, he should be expected to do a solid job against the dynamic receiver when in the slot. Ramsey has allowed just six receptions for 40 yards and hasn’t allowed a touchdown on 12 targets when aligned in the slot this season (including playoffs), per Pro Football Focus, allowing a completion percentage of 50 (tied for third lowest among corners). That falls in line with his overall completion percentage allowed in all alignments, which is also 50 percent, tied with teammate Darious Williams and Packers corner Jaire Alexander for second lowest in the league (min. 50 targets).

The Rams should have an answer for the Packers’ attempt to put Adams in situations that were advantageous throughout the season. But what about when Rodgers has time to air it out?

Rodgers has attempted a deep throw on 14.1 percent of his passes this season, the second-highest rate in the NFL behind only Tampa Bay’s Tom Brady﻿. He’s been excellent on these attempts, posting a 12:0 TD-to-INT ratio and 128.7 passer rating.

It seems as if the Rams are statistically capable of countering two of Green Bay’s best approaches to finding success in the passing game. It’ll take a total defensive effort to shut down Matt LaFleur’s offense, of course, but these numbers make us think the Packers might not enjoy as easy a road through the air as we’re accustomed to seeing.

We all know Baltimore is a run-first team capable of exerting its will on opposing defenses, no matter the circumstance. It might be even more important in the Divisional Round with snow possible in wintry Buffalo.

The Bills will need to add defenders to the box to have a chance. Baltimore is averaging 6.5 yards per carry and a 10-plus-yard run percentage of 19.3 against light boxes this season, while Buffalo is allowing 6.1 yards per carry when presenting a light box. The Ravens are good at getting going quickly, averaging 2.7 yards before contact versus light boxes — the second-highest rate in the league — while the Bills are allowing 2.3 yards per carry before contact in light boxes, the fifth-worst rate in the NFL. Both of the initial per-carry averages are the highest in the NFL, and the Bills appear ready to allow the Ravens to meet those averages based on their own performances with light boxes.

This is, of course, because of the constant threat of ﻿Lamar Jackson﻿ to keep it and take off, limiting a defense’s ability to anticipate where the ball is going, even with a numbers advantage. Should the Ravens again commit to the run, they might have a field day against the higher-seeded Bills.

3. Browns’ quick-trigger offense could put Chiefs on their heels

Cleveland’s greatest strength is clearly in running the ball, something opposing defenses have acknowledged in loading the box with more defenders on average against the Browns than any other team faced in 2020. While the Browns will need to rely on their spectacular running back duo of ﻿Nick Chubb﻿ and ﻿Kareem Hunt﻿, it might not be their only route to success.

Cleveland took a new approach to its offense that was impossible to miss in its wild-card win over Pittsburgh, countering offensive line losses and the Steelers’ premier pass rush by simply resolving to get the ball out quicker. ﻿Baker Mayfield﻿’s time to throw of 2.34 seconds on average was the fastest for him in a game this season, and he was excellent on such attempts, completing 17 of 26 passes for an average of 7.7 yards per attempt, a TD-INT ratio of 3-0 and a passer rating of 127.2. His numbers with a longer time to throw paled in comparison to his quick-release performance, which should serve as an ideal balance to Kansas City’s potential focus on adding defenders and pressure to counter Cleveland’s rushing attack.

The Chiefs have a tendency to blitz plenty, sending additional rushers on 38.9 percent of opposing dropbacks this season, the fourth-highest rate in the league. Kansas City has allowed the fourth-lowest passer rating when blitzing at 81.8, and the fifth-lowest completion percentage at 57.3 percent.

Mayfield was well above that rate at 65.4 percent when getting the ball out quickly against a defense with a better pass rush, and that falls in line with his performance against the blitz over the entire season. Mayfield has completed 67 percent of his passes against the blitz for an average of 8.2 yards per attempt, a 15-3 TD-INT ratio and a top-five passer rating at 113.6.

The Chiefs can send pressure and load the box against Cleveland, but it won’t be anything the Browns haven’t already seen plenty in 2020. If we learned anything from Super Wild Card Weekend, it’s that manufactured pressure doesn’t hinder the Browns. Should the Chiefs react by dropping more defenders into coverage, we can expect Chubb and Hunt to break out. Believe it or not, the Browns seem to be in an advantageous position when possessing the ball this weekend. We’ll see if it’s enough to keep pace with Kansas City’s No. 1 offense.

Tampa Bay will have to account for New Orleans’ variety of options in the passing game, with ﻿Deonte Harris﻿ proving he could be a surprising threat after catching seven passes for 83 yards in the Saints’ wild-card win over the Bears. But the Buccaneers might have an advantage in at least one key area: runs inside the tackles.

﻿Alvin Kamara﻿ is one of the most effective runners inside the tackles in the NFL this season, according to Next Gen Stats, gaining 6.1 yards per rush (second-best in the league), posting a +99 rush yards over expectation (seventh in the NFL) and +1.23 rushing yards over expectation per run inside the tackles (fifth-best in the league). He gets going and is difficult to stop, breaking 15 miles per hour on inside rushes nine times this season.

There’s also the impact of do-everything guy ﻿Taysom Hill﻿ and bigger back ﻿Latavius Murray﻿, who have combined to rush 119 times for 453 yards and two touchdowns on inside rushes, with Murray outperforming Hill by 0.8 yards per carry. Kamara has scored 12 touchdowns on outside rushes, but his average gains per rush are significantly lower, while the opposite is true for Murray and Hill.

The Buccaneers will clearly have to prepare for a variety of rushing attacks from the Saints, as the numbers above prove, but Tampa Bay has been phenomenal against inside rushes, allowing just 2.9 yards per rush inside the tackles this season, the lowest rate in the NFL. If the Buccaneers can limit Kamara where he’s most successful, it might at least take away one of New Orleans’ options on the ground, making for a less unpredictable approach.

That should allow key defenders like ﻿Lavonte David﻿ to zero in on his target. According to Pro Football Focus, David ranks among the top 10 linebackers in run defense grade and coverage grade. David can be counted on to provide reliable contributions defensively, and if the Bucs can force the Saints to become slightly less multi-dimensional, they’ll have a better shot of upsetting the NFC South champions.