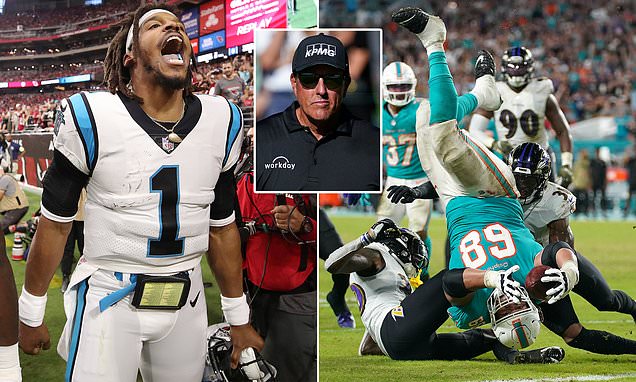 The latest incredulous chapter of a scarcely believable NFL season saw the return of a hero, the premature return of another and Odell Beckham Jnr losing on his Rams debut. In short, no-one knows anything, let alone what’s going to happen next.

Bruce Arians wasn’t happy as the Bucs lost again, the Titans won a sixth on the trot – and fifth against one of last season’s playoff teams – while the Patriots made it back to back home games scoring over 45 points. That has never happened before.

Home advantage held true with only five road teams winning. Oh, and there was the first tie of the season – not that Najee Harris knew much about it – as the Lions took a significant step towards 0-16-1.

And on the Manning Cast, Al Michaels returned to MNF and Phil Mickelson turned the tables on Peyton and Eli.

Cam Newton announced his return to Carolina in storybook style, scoring on his first play as he helped the Panthers seal a potentially season-changing upset win in Arizona.

While starter PJ Walker took the majority of snaps, Newton was able to make an enormous impact when he appeared after rejoining Carolina last week in the wake of Sam Darnold’s injury.

His first two touches back in a Panthers shirt brought touchdowns – the first a two-yard rushing touchdown, the second a pass to Robby Anderson. 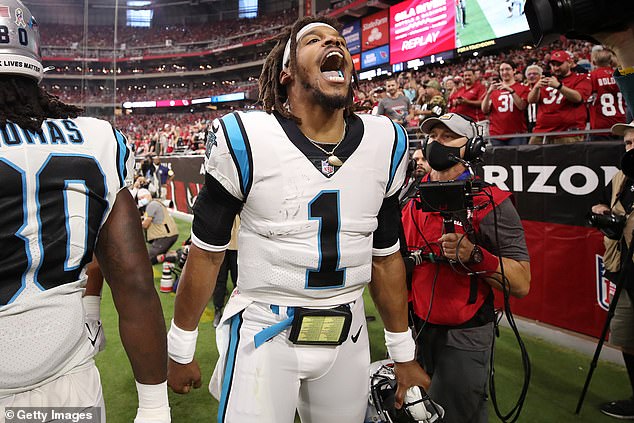 After scoring – coincidentally on the same field he scored his first-ever NFL touchdown 10 years ago – Newton ripped his helmet off and roared: ‘I’m back!’ at a grateful TV camera.

It drew a 15-yard unsportsmanlike penalty, but few could begrudge Newton the show of emotion.

‘I’ll put it like this: this time last week, I was eating a bowl of cereal. You feel me? So, I told coach Rhule it would never happen again,’ he said.

‘So, that just puts things into perspective. After going to church, being with my children and really not even watching football; it was just about maximizing the person I need to be and so for that it was just all a rush of emotions.

‘But yet I know a lot of people in the media, the titles of the newspapers, the blogs, they want to make it about me and it’s not about me and I keep sayin’ this. This was an impeccable team win.’

Stephon Gilmore was not alone in praising Newton, adding: ‘He’s a great teammate, he’s a hard worker… He’s a great person. I think he’s going to bring a lot of energy to this team.’

OBVIOUSLY YOU’RE NOT A GOLFER

There have been some superb guests on the Manning Cast, but Phil Mickelson is right up there after appearing during the second quarter of the 49ers 31-10 blowout win over the Rams.

‘This was a humbling night,’ said Sean McVay after defeat for the ‘all in’ LA Rams as  San Francisco won at home for the first time in over a year. 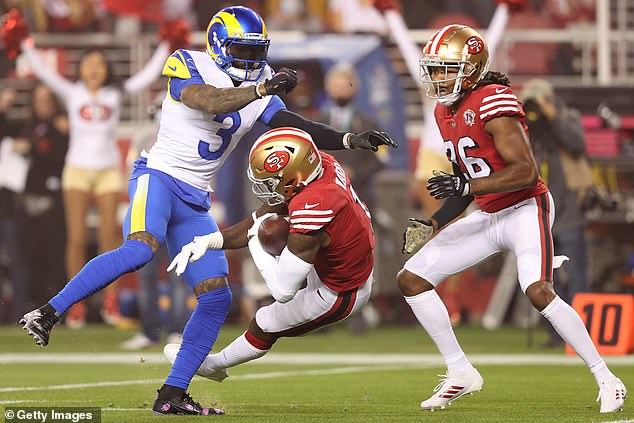 Fresh from winning the Charles Schwab Cup Championship in Arizona and with the Wanamaker Trophy on display, Mickelson was asked by Eli Manning if he could dispel any truth in the Manning Cast Curse.

‘No, I believe that it is a thing, and that’s why I’m not playing next week,’ Mickelson said. ‘I didn’t know if it would carry over to golf or not. I think it’s real.’

Every active NFL player who has been a guest this season has gone on to lose the following week (Travis Kelce, Russell Wilson, Rob Gronkowski, Matthew Stafford, Tom Brady and Josh Allen).

Mickelson was superb, asking Peyton about how he reads defenses, the meaning of ‘Omaha’ and grilling Eli about why former team-mate Odell Beckham Jnr didn’t make it in Cleveland. 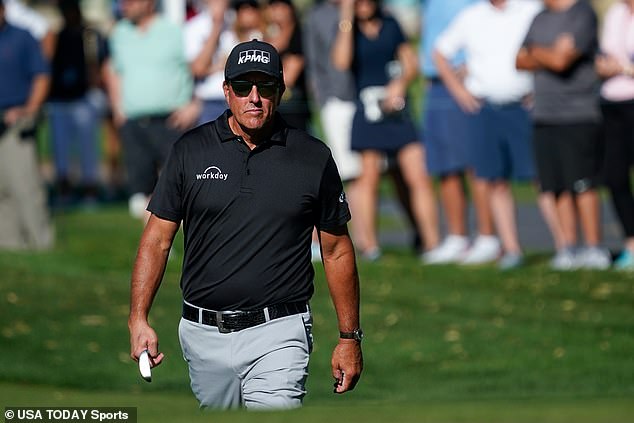 Shame to see one of the highlights of the season counting for nothing. Still, the memories of Robert Hunt’s burst and acrobatic leap over the line will live long.

In the fourth quarter of the Dolphins’ surprise win over the Ravens, Tua Tagovailoa rolled back and threw a pass in desperation toward running back Myles Gaskin.

But guard Hunt – who hadn’t declared as eligible – grabbed it and ran toward the end zone, flipping over the line as he broke the plane, before landing on his head. 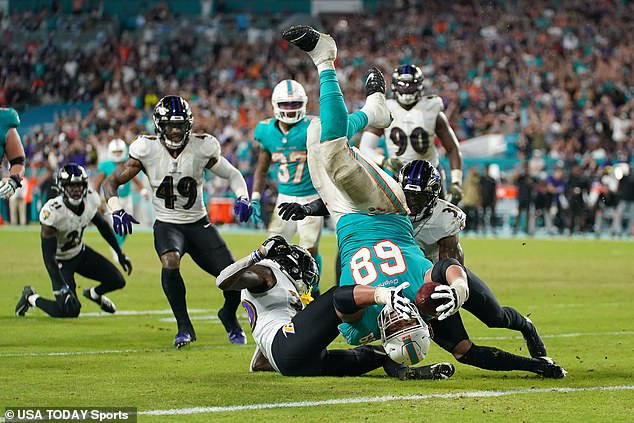 Teddy Bridgewater and the Broncos were brought back to earth by Philadelphia after an outstanding week nine win over Dallas.

They scored one offensive touchdown during a 30-13 defeat which will be remembered for something Bridgewater did not do.

After Darius Slay recovered a fumble from Melvin Gordon, Bridgewater had the chance to tackle Slay before he made an 83-yard touchdown. He opted for personal safety first.

‘I’d like to see us all pursue it a little bit better offensively and try to get that guy down,’ head coach Vic Fangio said. ‘I’d like to see Teddy at least make a play at the guy.’

Bridgewater said: ‘I’m right there, the opportunity to just dive, sacrifice, do whatever I can to help the team, and in that moment I failed.

‘I own up to it. That’s one of those moments I have to own up to the fact I didn’t give everything I had in me on that play.’

‘I was hoping Teddy didn’t try to (make the tackle),’ Slay said after the game. ‘Because I would have given him a good arm.’

TAUNT OR NO TAUNT?

There have been plenty of games spoiled this season by taunting calls, so it was nice to see no reaction from referees after Justin Jefferson threw the ball at Keenan Allen.

While Chargers fans may have felt otherwise, the Vikings receiver insisted there was no disrespect…

BLAST FROM THE PAST

Dan Quinn was fired by the Falcons five games into last season. He’s now Dallas’s defensive coordinator, but it was the Cowboys offense which did the damage as they romped into a 36-3 first-half lead. Dallas won 43-3 to establish their NFC credentials.

But pity the poor Falcons, who were bombarded with abuse after falling – you guessed it – 28-3 down…

Mike Zimmer had much to smile about after the Vikings played aggressive and won in Los Angeles.

And after showing Brandon Staley a thing or two about fourth downs, he was called by Deion Sanders during Monday’s media duties.

Sanders, who worked under Zimmer in Dallas in the mid-Nineties, has been in hospital for a fortnight following complications on foot surgery.

Now head coach at Jackson State, Sanders said: ‘Hey everybody. That was a big win my man had yesterday. I picked him, I knew he was going to be dominant yesterday. You ain’t going to let no young coach beat you. I know better than that, man.’

Asked how he was doing, Sanders replied: ‘I’m hanging in there, I’m getting better and better every day.’

‘Sorry about that, I haven’t been able to get a hold of him for like two weeks. He’s been in the hospital,’ Zimmer added.

Back to back defeats for the Bucs. While this was hardly news two years ago, now that Tom Brady is in the building, this may just be a thing.

Brady threw two first quarter interceptions – only the second time that has happened in his career and the first time since 2012 – as undisciplined Tampa Bay s(t)ank to a 29-19 defeat by Washington.

Brady didn’t want to talk about it afterwards, lasting one minute and 44 seconds in front of reporters.

But Arians was happy to explain the interceptions, adding: ‘It has nothing to do with the receivers. It was him.’ 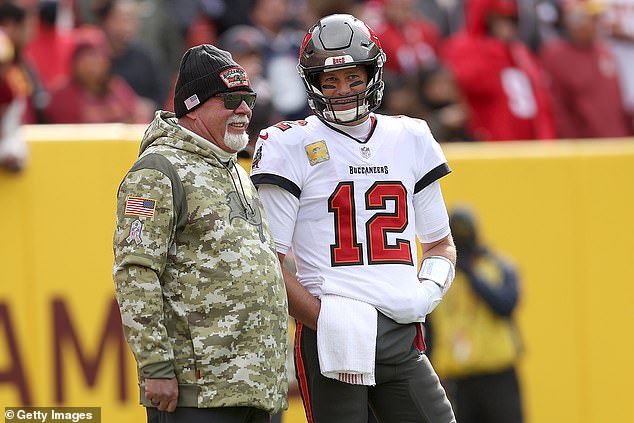 He continued in a similar vein.

‘It has nothing to do with ability. It’s about execution and being a smart football team. We’re a very dumb football team. And that’s a reflection on the coaches.

‘It’s very alarming to watch the energy at every practice and show up with a lack of execution and energy that it takes to win on Sunday. We’ve got a lot of soul-searching to do.

Russell Wilson returned after nursing an injury to his right middle finger.

On this evidence, he came back too soon as the Seahawks were humbled 17-0 by Green Bay.

The last time the Seahawks were scoreless was in week two of 2011, but after the worst game of his career, Wilson said: ‘My finger felt fine. The problem with tonight was I just had two bad plays. That’s what it really was.’

As the Seahawks sank to 3-6, DK Metcalf was ejected for this…

He then tried to re-enter the game, but will likely face a fine rather than a suspension.

After the game, he said he was: ‘Tired of losing.’

Missing Ben Roethlisberger due to Covid, the Steelers did the unthinkable and were held 16-16 by Detroit, who at least will not be going 0-17.

But 0-16-1 is still an option after kicker Ryan Santoro missed a game-winning 46-yard field goal in overtime.

There was some confusion about the rules, with Steelers running back Najee Harris unaware that games could be tied – and Lions running back Godwin Igwebuike expecting a second period of overtime.

‘I didn’t even know you could tie in the NFL. In my mind, I was sitting on the bench saying, “I’ve got another quarter to go”,’ Harris said. ‘But someone came to me and said, ‘that’s it.’ I’ve never had a tie in my life before.’

Igwebuike added: ‘I’m back there like, “Yo, how many overtimes can we do?” And they’re like “three”. I hear ‘two, one’ and we were like, ‘Yo, whatever’s going on, we’re about to just put our all into it.’